Penny Wilton was just 8 years old when she was diagnosed with Transverse Myelitis (TM) in October 2011.  She was paralysed from the waist down, had sight problems causing her to see four of everything and was in a lot of pain. 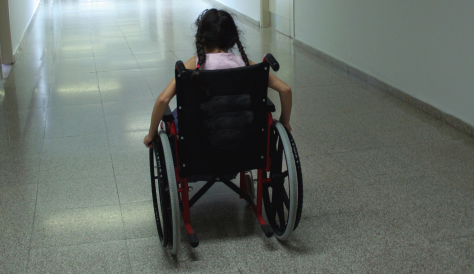 TM is an uncommon neurological disorder, which results in inflammation of the central nervous system.   Symptoms include muscle weakness, paralysis, fatigue, depression, fever, headache and incontinence.

Penny was treated at Aberdeen Children’s Hospital, where TM was diagnosed within a week of her being admitted. Treatment usually involves using drugs, such as steroids, to reduce inflammation and then physiotherapy to help with rehabilitation.  Recovery can take up to two years – one third of patients make a good recovery, one third make a partial recovery and a third show no recovery at all.

Physiotherapists started working with Penny within a day of her diagnosis, while she was still on the high dependency unit.  The first stage involved passive range of movement exercises and gentle stretches to Penny’s limbs to maintain muscle length and joint range, soft tissue massage was also used to assist with sensory issues and pain.

Lynn, Penny’s mother,  says  “Penny has been very positive and was absolutely determined to walk again. We were very lucky to get the right treatment for Penny so quickly.”

Lynn and Jack, Penny’s  father, were also very determined, doing the physio exercises with her from time to time during the early hours of the morning when Penny couldn’t sleep.

After about four weeks of being paralysed, Penny felt a tiny flicker of movement in a toe in her right foot. A couple of weeks later she got some movement back in her left foot.

Penny was initially in a wheelchair with full support for her body and neck, but as she improved she required less and less support.  The physios continued to work with her daily, building up her core strength and helping her to learn how to sit up and move again.

Eventually with the support of the physios, OTs and her parents, Penny started moving her limbs, regained the ability to sit and stand, and then walk again.  She was able to leave hospital in December 2011.
Penny continued going to hospital two days a week for physiotherapy.  Her parents also took her for other forms of exercise and therapy, such as riding for the disabled and reflexology to try and keep the process of rehabilitation interesting and stimulating.

Penny is now walking again and is back at school full time.

“Penny was delightful young girl who was very determined throughout her rehabilitation, and never let things get her down.  Not many 8 year olds would cope as well as she did in that situation, especially in the inital part of her treatment.  She worked hard in her physiotherapy sessions as well as completing exercises regularly on the ward with her parents and visitors.  She has made a fantastic recovery, which has definitely been helped by her motivation and her family’s support.”

“We are still working on improving Penny’s gait and core strength, but I feel she is 95% recovered. Everyone has been so supportive, including Penny’s PE  teachers who continued doing the physio exercises with her when she was too weak to take part in usual school games.  The golden key to Penny’s recovery was the physiotherapy – it’s been amazing and, as determined as Penny was, without it I don’t think she would have recovered."