There have been two key moments in the sailing career of John Robertson; the first was over 30 years ago when his father Ian took him sailing around Sunderland's coast, an experience that ignited his passion for sailing. The second was in 1994 when Robertson, then in his early twenties, had a motorbike accident which left him with a severe spinal injury. 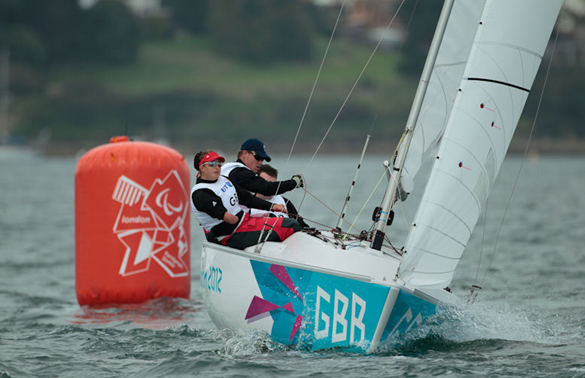 “It was quite obvious to me that I’d damaged myself pretty badly. It took a while to get my head around the fact that I wasn’t going to walk again. It seemed bleak at the time” says Robertson

Despite having to cut short a promising career in the RAF John believes his accident has changed his world for the better.

“I was a mechanic with the RAF at the time of the accident and I would probably be working in Afghanistan now. I definitely prefer my life now, I’ve met thousands of really interesting people and travelled all over the world sailing, something I love.”

John began sailing with Team GB in 1996 and has since gone on to win back-to-back World Championships (a world first!) and compete in three Paralympics,  Athens (2004), Beijing (2008) and London (2012), finishing 6th, 6th and 5th respectively – narrowly missing out on a medal in London. John is quick to point out the key role physiotherapy played in allowing him to fulfil his sporting potential.

“They (physiotherapists) were massive help and got me back on my feet, so to speak. They helped me with everything, from transferring to using a wheelchair down the street, getting up and down curbs and basically how to live my life. So it’s been pretty important to me.

“Since 1997 I’ve worked with physiotherapists on lots aspects – from getting fit to injury prevention and treating soft tissue injuries. Physiotherapy is just there for us, it’s a crucial part of everyday life in sport that we as athletes just have there when we need it. So it’s been massive for me”.

Lilly Devine, lead physiotherapist for sailing at the English Institute of Sport, explains how physiotherapy has been used to help prepare John cope with the rigours of competing at a world class level.

“John had shoulder surgery, a few years ago, so a big part of the physiotherapy team’s role has been to improve his upper limb strength and shoulder stability. His shoulder needs to function well to allow him to perform to his best abilities on the boat, but also doing day to day activities like transferring in and out of his chair. It has been a full team effort to ensure that John doesn’t have to worry about his shoulder being sore or not strong enough..

All of the athletes have individual training programmes. Part of Johns programme is to spend time in a  standing frame,  allowing him time in an supported upright position. That helps them physically, but it’s also a great psychological boost to get out of their wheelchair. Much of the work physiotherapists do is about getting people in the right frame of mind to perform their best.

Physiotherapy is not always glamorous. Tasks like making sure drinks bottles are full and kit is where it’s needed are very important. Keeping the athlete calm is also critical because competition is a high pressure situation.

Our aim is to maximise abilities and minimise the disabilities” Lily adds.

John is currently training hard to secure his third title at the upcoming IFDS (International Federation of Disabled Sailing) World Championships in Cork Ireland following his disappointment at the London games. Despite missing out on a medal in 2012 John believes the impact of the games has been significant:

“Kids in the street now come up to you and ask if you do sport, instead of just looking at your wheelchair and disability. London 2012 was amazing; it’s shown that people with a disability are approachable and that we can be world class athletes too”