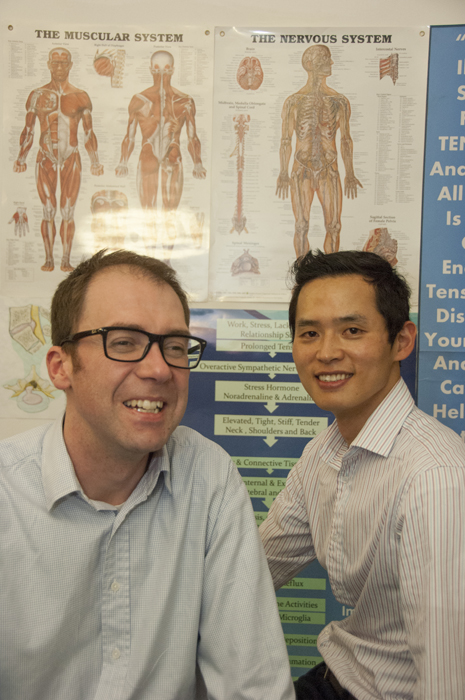 From daily injections to once-a-month physiotherapy, Mark Auld has come a long way in his management of Multiple Sclerosis (MS).

The Musselburgh resident was just 30 when he first developed symptoms of the autoimmune condition, after waking one day with “pins and needles” in his hand.

His condition quickly deteriorated and Mark found himself unable to walk further than his local shop to pick up the newspaper. As his condition, diagnosed as relapsing remitting MS, became worse, he had to leave his job as media manager for National Rail in Scotland and forfeited much of his social life.

Now 39, Mark credits a positive mindset, determination and specialist physiotherapy in helping him regain control of his life.

In March 2013 Mark began physiotherapy with Chongsu Lee, a chartered physiotherapist specialising in an MS treatment that focuses on gentle massage and mobilisation of the spine.

“It has worked wonders on me,” he said. 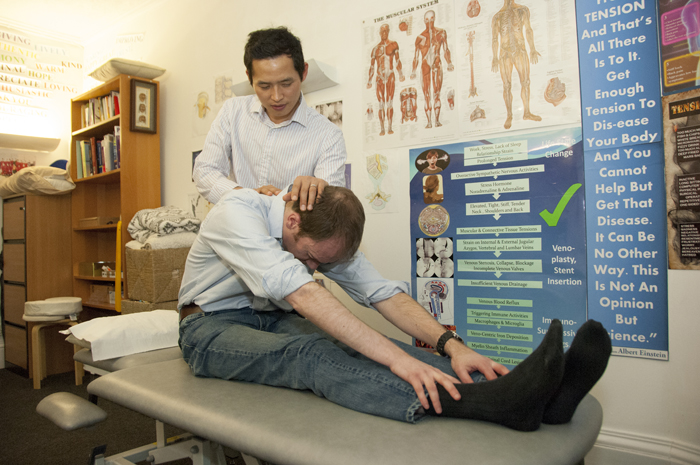 Chongsu takes Mark through exercises to
improve his movement

With the advice and guidance of Chongsu, Mark set goals to improve his movement and stability and said the support had helped him “without a doubt”.

“The fact that I got to the point where I was able to stretch to replace the light bulb was a big thing,” he said.

“Now the biggest thing for me is to walk up the stairs unaided.”

He also hopes to return to employed work, after successfully managing two days of voluntary work.

Mark is currently in remission, which means his MS is in a period where the symptoms are mild or can disappear altogether. This can last for days, weeks or possibly even months.

Chongsu said Mark had progressed in leaps and bounds since his first appointment in March 2013.

“When I saw him, he was very shaky, his balance was poor and he was only able to walk for about five minutes,” he said.

“Treatment is important but individual commitment is very important as well. Lots of people with MS agree stress aggravates symptoms, so Mark is very good at not putting himself under too much pressure.”

The owner of Point One Clinic, which has branches in Glasgow, Edinburgh, Aberdeen and the Scottish Borders, said he developed his type of treatment through close monitoring of his patients’ improvements after using the technique. A PhD research project on the treatment style will be funded by Medical Research Scotland next year at Edinburgh Napier University. 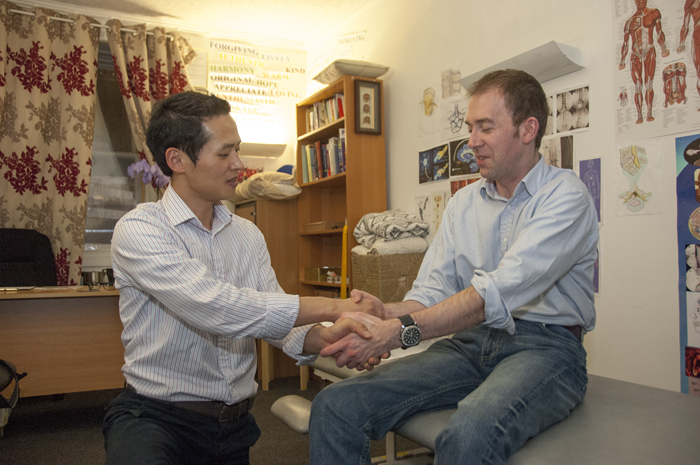 Read more about how physiotherapy can help people with Multiple Sclerosis