More than 900 CSP delegates held hands and professed love to the person sitting next them in an unusual session that helped get Physiotherapy UK 2015 off to a laughter-filled start in Liverpool. 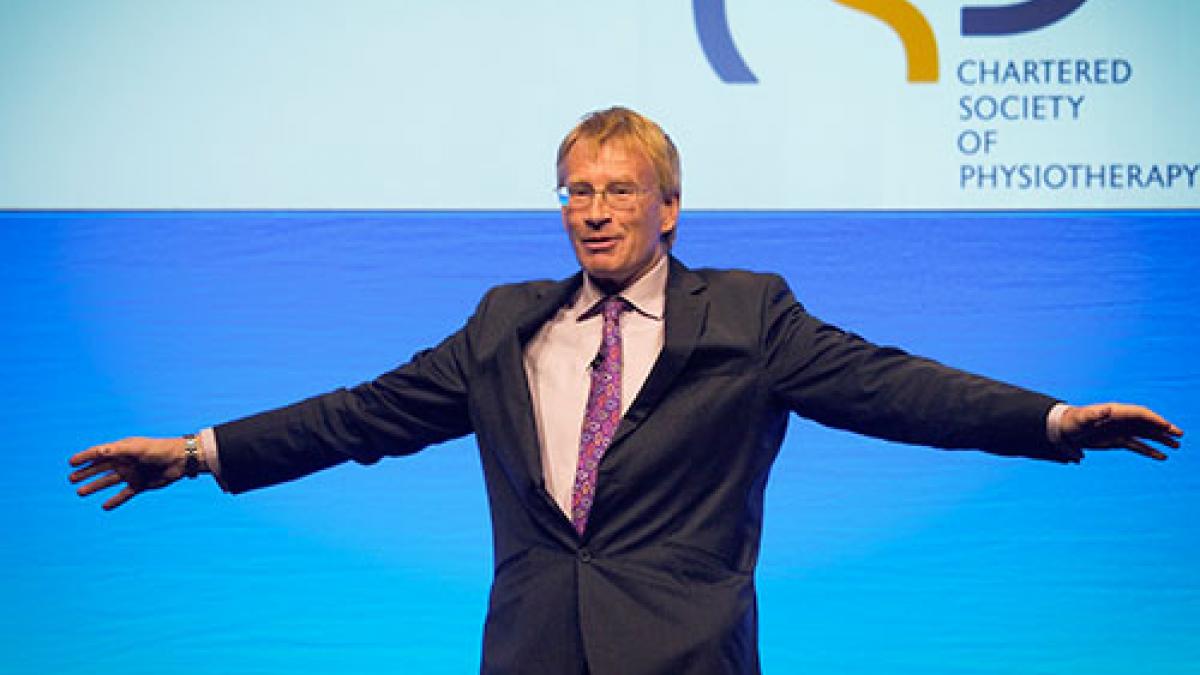 Phil Hammond: 'Ninety per cent of the time a dog is better for you than a doctor.' Photo: Mark Pinder/Guzelian

The delegates were responding to a plea from Phil Hammond, a hospital doctor, comedian and journalist, who argued that NHS staff can’t deliver compassionate care to patients unless they first love themselves.

Dr Hammond’s presentation drew on his routine as a successful stand-up comic and broadcaster, but also from having been a GP since 1993, and, more recently, as a specialist working with children and adolescents with chronic fatigue syndrome/ME.

As a GP he said his consultations had been limited to 10-minute blocks but now he was fortunate to have 90-minute appointments, enabling him to build relationships with the young person and his or her family. The ultimate aim was to ‘hand over responsibility’ to the patient, he said.

A recurrent theme in his presentation was the need for everyone to nurture their own and others’ physical and mental wellbeing – whether this was by walking with a dog, visiting lonely older neighbours or taking time to reflect on the events of the day.

‘Ninety per cent of the time, a dog is better for you than a GP,’ he said, as a dog would listen to you and look directly at you until you took it for a healthy walk. As a side-effect, dog walkers quickly build new social circles, he noted. ‘You will also keep supple as you pick up the poo.’

Dr Hammond said his patients had often got into the habit of taking i-Pads and mobile phones to bed with them, which meant they ended up with ‘day-night reversal’. A first step was to rise at the same time in the morning, open the curtains and stimulate the brain with natural light. Children in the US could identify 100 corporate logos but fewer than five wild flowers, he pointed out.

On a more serious note, Dr Hammond said he campaigned on behalf of NHS whistleblowers. He pointed out that the NHS could have saved £100 million in subsequent inquiry costs if whistleblowers in the ‘Bristol heart scandal’ had been listened to in the early 1990s. Many lives would also have been saved, he added.