#Physio17: Physios need to help primary care from ‘falling over’

Primary care services in the UK are about to ‘literally fall over’, CSP chief executive Karen Middleton told a session at the society’s annual conference in Birmingham this month. Delegates heard examples of successes by first point practitioners. 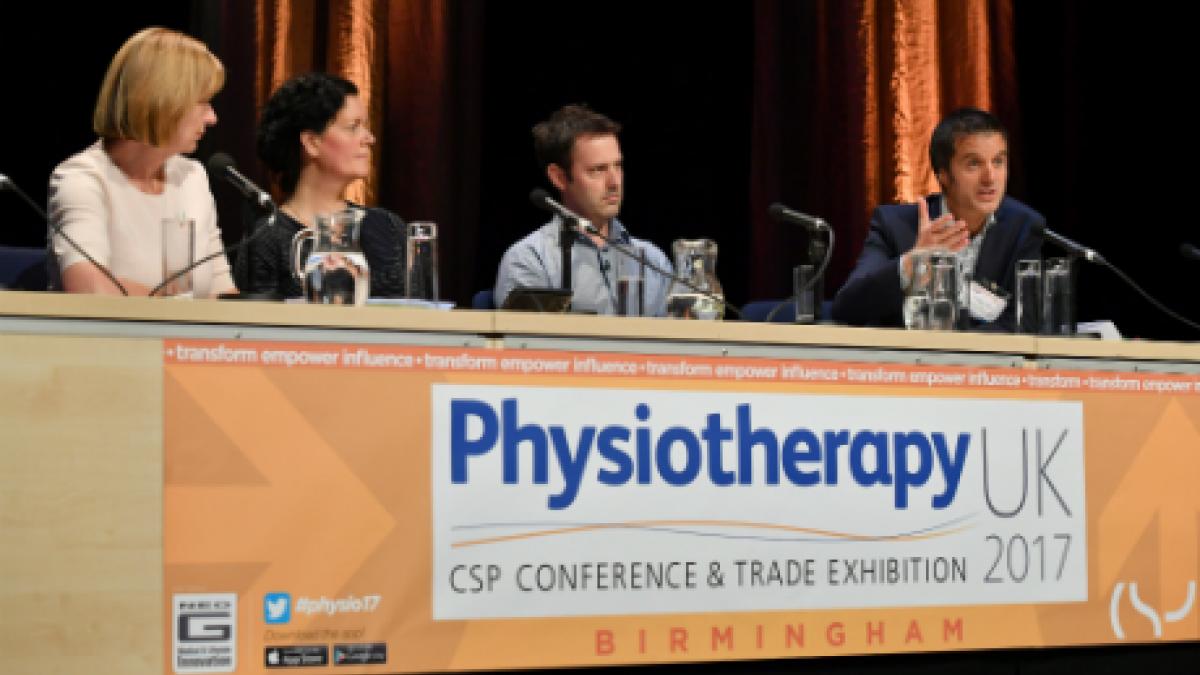 ‘So it’s imperative that we all work really hard to ensure it thrives, despite the ever-increasing demand and the complexity of those who need it,’ said Professor Middleton.

The CSP has been working hard to highlight the contribution physiotherapy can make to make to primary care, how it can relieve the pressure on GPs, deliver better clinical outcomes, save money and get people back to work faster, she said.

‘At the same time, of course, advanced practice physiotherapists all over the UK have been shifting their service in to primary care, facilitated self-referral and taking their place as the first point of contact.’

She was speaking within days of an indication from NHS England that it was likely to adopt the model more widely.

Advanced physiotherapy practitioner Robert Caine spoke of his ‘passion’ in leading a pilot delivering musculoskeletal (MSK) physio in GP practices in Gwynedd in 2015.

Two and half years on and physios are in 65 of the 128 surgeries in north Wales.

‘We’d like to be in them all but we don’t have the staff or funding to do that, but 50 per cent is better than none.’

Of the 25,131 MSK patients seen by physios at GP surgeries across the Betsi Cadwaladr University Health Board for the year from January 2016, just 112 had to be seen by the GP, and only 62 were referred back to GP.

‘Essentially we are the MSK specialist in the GP surgery,’ said Mr Caine. ‘It would be them (the GPs) coming to ask us about problems.’

He estimated that one fifth of the GPs’ daily caseload was MSK.

The role of physio in primary care meant that patients had improved access, were treated quicker, were treated closer to home, and created opportunities for reduced referrals in secondary care which, Mr Caine said, ‘were more appropriate because we’d screened them’.

‘Those referred that went to physiotherapy were the actual patients you wanted to see in physiotherapy, they were rehab-able. They weren’t what we call the “frequent flyers” who come round and round in circles; they go to orthopaedics, pain clinic, rheumatology, back to physiotherapy.

After a year, the GPs ‘loved it and they ploughed more money in’, Mr Caine said.

‘We’re seeing the patient quicker, by the right person first time, not being pushed from pillar to post.

‘After three years of doing this role and looking at the way, especially in England recently, I recognise that most MSK services are going to be happening in primary care sooner or later, I think they have to be.’ 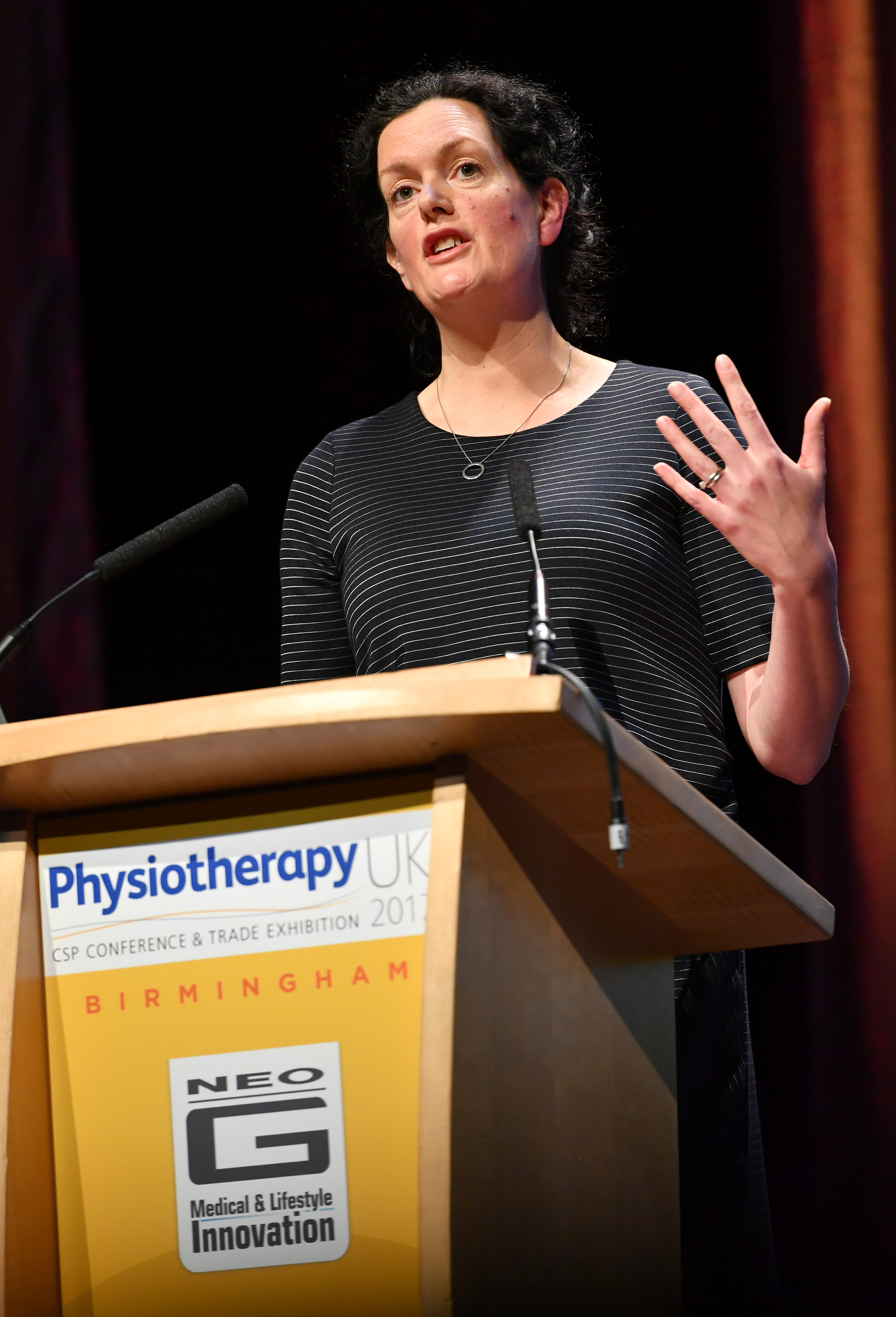 Orla Prowse (right), service lead physio in NHS Lothian, explained to delegates how she is leading the development of the community advanced physiotherapy practitioner (CAPP) role with an Edinburgh GP practice. The post is believed to be the first in the UK.

‘Patients don’t want to be caught up in the revolving door of health care. The evidence shows that a case management model which involves patients planning their own care by planning can help avoid unnecessary contact and improve outcomes.

‘It places the patient at the heart of their health care needs and decision making. It is realistic medicine.’

She played a video from the partners in which Dr Piotr Konieczny said: ‘I am lost for words. It took a lot of pressure off us and changed the way we worked on a daily basis.’

And Dr Jane Marshall added: ‘GP in Edinburgh was on its knees. We’ve created a sustainable model, better than what we had before.’

From the perspective of the GP and commissioner, Dr Angus Tallini, a partner in a GP surgery in Newbury and GP lead on local CCG, said general practice had been ‘stalling’ in reaching out to other workforces.

But when his practice found itself short of GPs, a physio was hired.

‘It is a model that places the patient at the heart of their health care needs and decision-making. ‘I’d be very keen to see this role routine within general practice.

He called for a move away from the ‘ineffective’ medical (pharmaceutical/surgical) model for MSK problems.

‘In general practice it is a prevalent idea that if you medicate people they’ll go away, that it’ll solve their problem. Opiate prescribing is rising exponentially. Actually we can offer people something different which doesn’t involve codeine and strong opioids.’

Dr Tallini said a ‘fresh look’ at the way MSK problems were managed in the NHS. ‘It is imperative from an affordability point a view, but more important from an effectiveness and patient point of view. If I had an MSK problem, would I go to a colleague GP or a physio practitioner? I think I know which I would chose.’

In answer to a delegate’s question about finance, Dr Tallini said that every CCG in the country was in ‘impossible’ financial straits.

The hope is that it’s at the level of NHS England to be able to ‘pump prime’.

Ms Middleton added: ‘The care pathway approach is the only way to look at it. As many figures we can put in front of them, the more likely there’ll be change. And shifting what you have already got in to primary care.’