Professional football players often experience low back pain which can be challenging and complex to treat, but acupuncture can help as part of a multimodal approach. 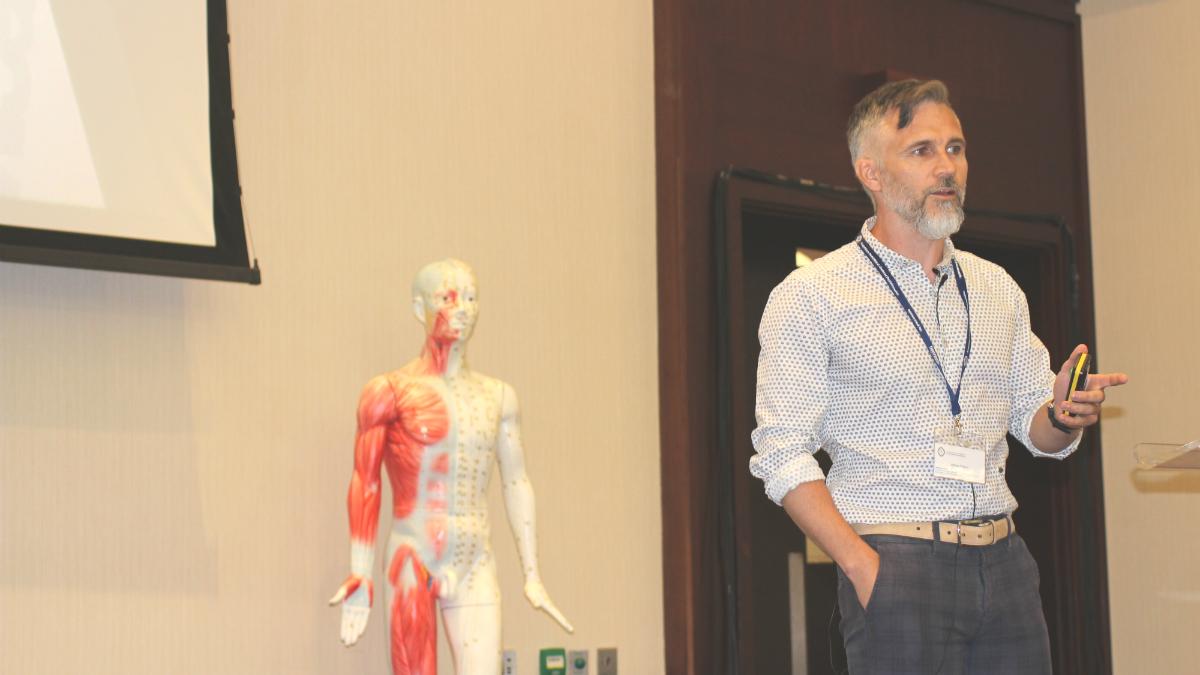 Johnny Wilson during his AACP presentation

This was the message from Johnny Wilson, clinical director of Athlete Rebuild and former head physio for professional football clubs Notts County, and Scunthorpe and Chesterfield.

He shared his experience of how acupuncture could improve the outcomes of injuries in professional sport during the Acupunture Association of Chartered Physiotherapists (AACP) annual conference in Reading on 19 May.

Mr Wilson said: ‘In professional football we deal, on a day to day basis, with what are commonly known as “the big four”, because they carry quite a high burden of injury. They are hamstring, ankle, knee and groin injuries.

‘But what is less well known is the prevalence of low back pain, which is what I spend the majority of my time dealing with.

‘Players come to the clinic and have a lot of mobilisation and manual therapy on their lumbar spines. It’s generally self-limiting, but I’ve had two players over the last nine years whose careers have ended due to low back pain.’

Mr Wilson, who has worked in professional sport for 17 years, said the high incidence of low back pain was down to the extreme physical demands of the sport.

He explained that professional footballers usually played in at least 60 games and 160 training sessions over a 10-month season. In addition, while sprinting, players can reach top speeds of 32.8km per hour and often cover in excess of 10km per game.

‘Because of these demands we incorporate as many strategies as we can to keep the guys on the pitch.’

Acupuncture can help to fill the ‘management vacuum’

He told delegates that low back pain often presented a ‘conundrum’ because there was a lack of consensus about how to provide the best care. This had led to what he described as a ‘management vacuum’.

However, he said several research groups have suggested that longstanding low back pain can be generated and maintained at the local tissues (the site of pain), as well as in the corresponding spinal segment and at a cortical level.

As a result, he regularly offers acupuncture to athletes who complain of low back pain, as research has conclusively shown it can inhibit the sensation of pain locally, segmentally and cortically.

Keeping a player in the team

Mr Wilson said he advocated integrating acupuncture into a multimodal sports medicine approach and provided details of a case study of how this had worked with a young professional footballer.

The player had complained of an intermittent dull ache at rest. This rose to a high pain level (8 out of 10) whenever he ran or engaged in extension-based exercises in the gym.

He also experienced stiffness, discomfort in sustained postures and could only maintain a neutral pelvic tilt in any position. Adding to this, he had high anxiety levels as the pain was preventing him from playing or training at full intensity. He feared he might lose his place on the team.

No red flags were identified and nothing remarkable was found on examination. In addition, an MRI scan showed no structural abnormalities.

‘So we hypothesised that it must be neurophysiological and tested him using Peter O’Sullivan’s movement and functional impairment system for assessing low back pain,’ Mr Wilson said.

‘We did a lot of education with him, which was important, and his anxiety settled down. We talked about pain and tissue damage and possible neurophysiological drivers, which he thought were plausible. After that, he was keen to try acupuncture, which he’d never had before.’

A multimodal approach was implemented, which included eight 20 minute sessions of acupuncture and the outcomes were ‘very good’.

‘The sports medicine department was happy to advocate acupuncture as part of his programme because it kept him in training and helped to increase his levels of participation in terms of intensity of running and gym training,’ said Mr Wilson.

‘He also did other things as well, such as practising mindfulness. But post-acupuncture, he told us something had changed for him. He felt looser and we could all see a difference in him.’

Delegates heard that it was common for athletes to report reduced pain levels, improved lumbar range and improved function on posterior chain strength tests after acupuncture.

‘I also offer it as an option to players to help modulate pain levels, help them carry out their rehab and return to training and competing in a timely and safe manner.’