Injury in elite sports: can it be predicted? 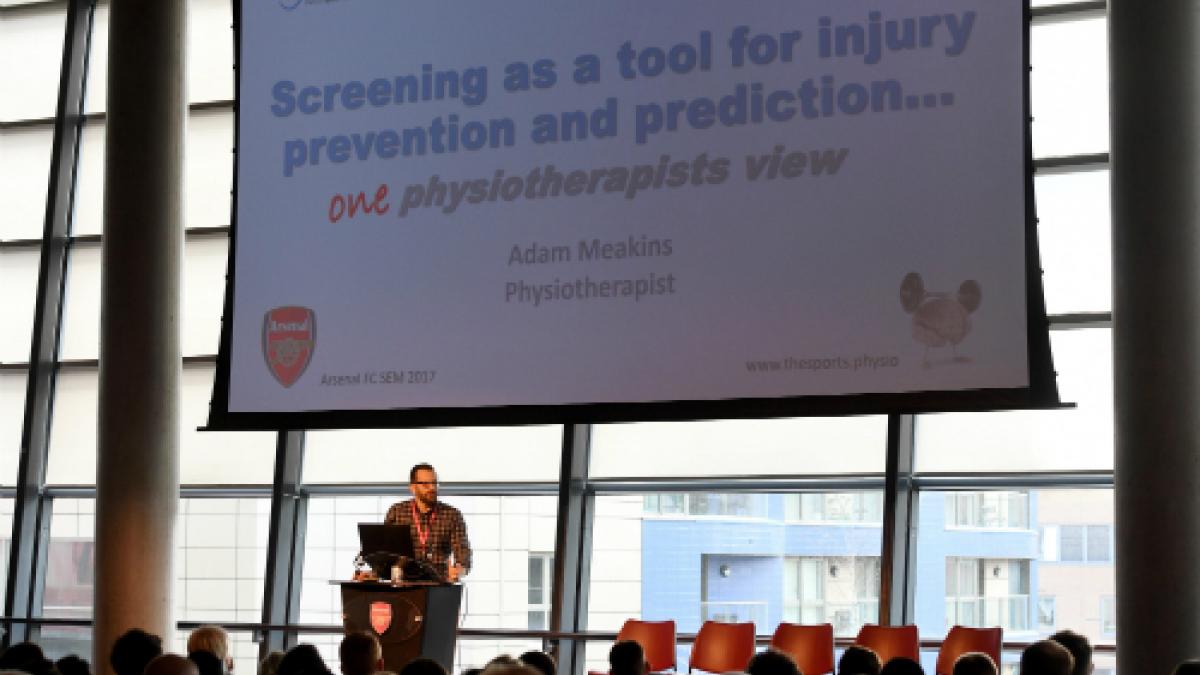 Does screening elite athletes provide an accurate forecast of injury, or even death? And if not, should sports clubs bother to screen their players?

These were the questions on the minds of speakers at Arsenal FC's sports and exercise medicine conference, Screening in elite sport: the search for the panacea to optimise player performance’, on 21 March.

The event was organised by Arsenal medical services head, physiotherapist Colin Lewin and team medical director Gary O'Driscoll. It was attended by 350 people.

Opening the conference, Arsenal club captain and German international defender Per Mertesacker, who needed surgery on a serious knee injury last year, said the setback has given him greater perspective on injury prevention.

‘I’m happy to answer questions every day as part of a screening process, but I know some of my team mates really don’t like it,’ he said.

Physiotherapist Adam Meakins, who has worked for premier league football clubs Watford and West Ham, told the conference that when he began his career, there was zero risk assessment for injury among footballers. Back then, a sports physio’s job was literally to patch a player up when he or she got injured.

Slowly, physios began to measure range and quality of movement, and strength, using increasingly sophisticated technology. But the trouble was that all the evidence showed that none of it was any good as a predictor of risk, he said.

‘Black box epidemiology’, demonstrated that an almost limitless number of variables were in play, making it almost impossible to predict risk, according to Mr Meakins.

He has developed an ‘injury reduction pyramid’, with psychological status on the bottom layer, then load management, followed by strength training. At the smallest, top part, of the pyramid lies ‘quackery’.

‘Only once you’ve exhausted everything you can do on the bottom layer should you move up to the next one,’ he said. ‘And I’m increasingly focusing only on the bottom three.’

Consultant cardiologist Sanjay Sharma demonstrated the value of screening for heart problems in young and elite athletes, but he said the method used for screening was vital.

Professor Sharma, who is medical director for the London Marathon and works with charity Cardiac Risk in the Young, said the US protocol was to screen athletes using a health questionnaire and physical examination. But 80 per cent of athletes who die suddenly from heart failure display no symptoms before the event.

The European method was to use a health questionnaire and an electrocardiogram, which was the best risk assessor for cardiac-related sudden death among athletes, he said.

The consensus now was that electrical faults with the heart, rather than structural defects, were the biggest cause of death, and Professor Sharma warned that primary care sports physicians should seek access to a cardiologist when assessing players’ electrocardiograms.

‘Professional athletes’ hearts are very different to those of the rest of the population and an ECG viewed by someone who is not an expert could suggest a whole range of problems that are in fact normal for an athlete,’ he said.

Professor Sharma also warned that sex, ethnicity, the type of sport, and intensity of training can all affect an electrocardiogram, but an international criteria had recently been published that would allow accurate electrocardiogram analysis by different categories of athlete.

Andrea Mosler a physiotherapist with Aspetar, an orthopaedic and sports medicine hospital in Qatar, suggested the reason for screening depended on what clinicians were trying to achieve.

Screening would give players’ current symptoms and a baseline measure to assess against but most importantly, in her view, was the opportunity to build a rapport with the players.

In her presentation about screening for groin pain, Ms Mosler, who is completing a PhD in the risk factors for hip and groin pain in footballers, explained that her team had established a set of normative data for professional footballers. She warned, however, that musculoskeletal screening would not detect individual players at risk from hip and groin injuries.

Instead, by screening new players, in particular, at a club, a relationship could be developed that should help early detection of symptoms.

‘A new player may be moving to a new country, maybe not speaking the language, they may not want to risk their big new contract, and there may be some unscrupulous agents involved’ she said. ‘We’re living in the real world.’

During his talk on the theme: Why screening to protect injury does not work and probably never will, Roald Bahr said screening can determine association, but not predict.

Professor Bahr, who is head of the Aspetar sports injury and illness prevention programme and professor of sports medicine at the Norwegian School of Sports Sciences, said: ‘No screening tests are accurate enough to predict injury, so prevention exercises should be given to all high-risk groups rather than high-risk individuals.’

But screening can play a significant role in harmonising the treatment of disparate athletes under the care of different medical teams, Professor Bahr told the conference.

‘Screening by Aspetar in Qatar found that one in three professional footballers had an MSK problem, but shouldn’t we already know that?’ he asked.

‘Maybe, with a professional football team whose players are seen every day by the club’s doctors and physios. But not with the Norwegian Olympic team who are often travelling around the world and live and train in different parts of the country.

‘Screening is a valuable tool to optimise athletes’ health, but keep your aims simple.’