A spinal injuries patient at the Robert Jones and Agnes Hunt Orthopaedic Hospital got married last October – with a little help from physiotherapist Sally Leppanen. 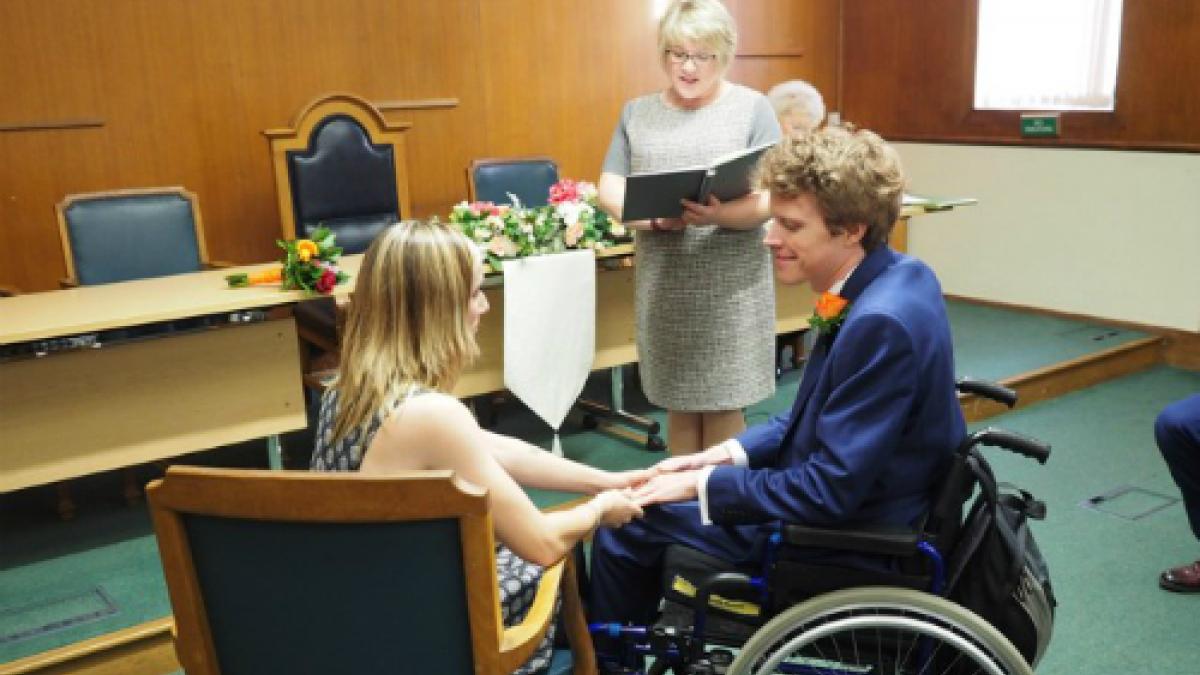 Ms Leppanen, who works at the Midland Centre for Spinal Injuries Therapy at the hospital in Oswestry, Shropshire, is also a ceremonies officer with Shropshire Registration Service.

While working with Tim Mabon, a patient who sustained a spinal cord injury earlier this year, Ms Leppanen discovered he was engaged to his partner, Dorleta Eskamendi-Gil.

Before Mr Mabon’s accident the couple had planned to marry in Spain, but afterwards they decided to get married in the UK – or possibly not at all.

‘Initially they were going to get married in the hospital,’ said Ms Leppanen. ‘But I looked to see if Oswestry’s council chamber was free for the date they wanted and it was.

‘So I suggested that by that point in Tim’s recovery he would be able to leave the unit and get married there. My registrar colleagues came and took their details. After that I was allocated to officiate their wedding.’

Mr Mabon, from Gloucestershire, and Ms Eskamendi-Gil’s wedding rings were engraved with the October date so they didn’t want to postpone the ceremony.

‘We had spent a year planning our marriage, albeit in Dorleta’s home town in Spain,’ said Mr Mabon, who sustained his injuries when he was knocked off his bike by a lorry earlier this year.

‘Shortly after my accident, we realised it would not be possible for me to travel, so we resigned our thoughts to not getting married this year.

‘So, it was mentioned that we should discuss the possibility [of marrying] with Sally, as she was known to be a qualified ceremonies officer. She then agreed to officiate at our ceremony.

When Mr Mabon returned to hospital, the physiotherapy team had decorated his bed space with balloons and handmade decorations.

‘The day was amazing,’ he added. ‘It went so well, although we hadn’t planned too much, it just evolved into a fantastic occasion.’