In one of the most unlikely venues for stand up, comedian and pelvic health physiotherapist Elaine Miller performed her award-winning Edinburgh Festival Fringe show, Gusset Grippers, at the Scottish Parliament on Tuesday (21 November). 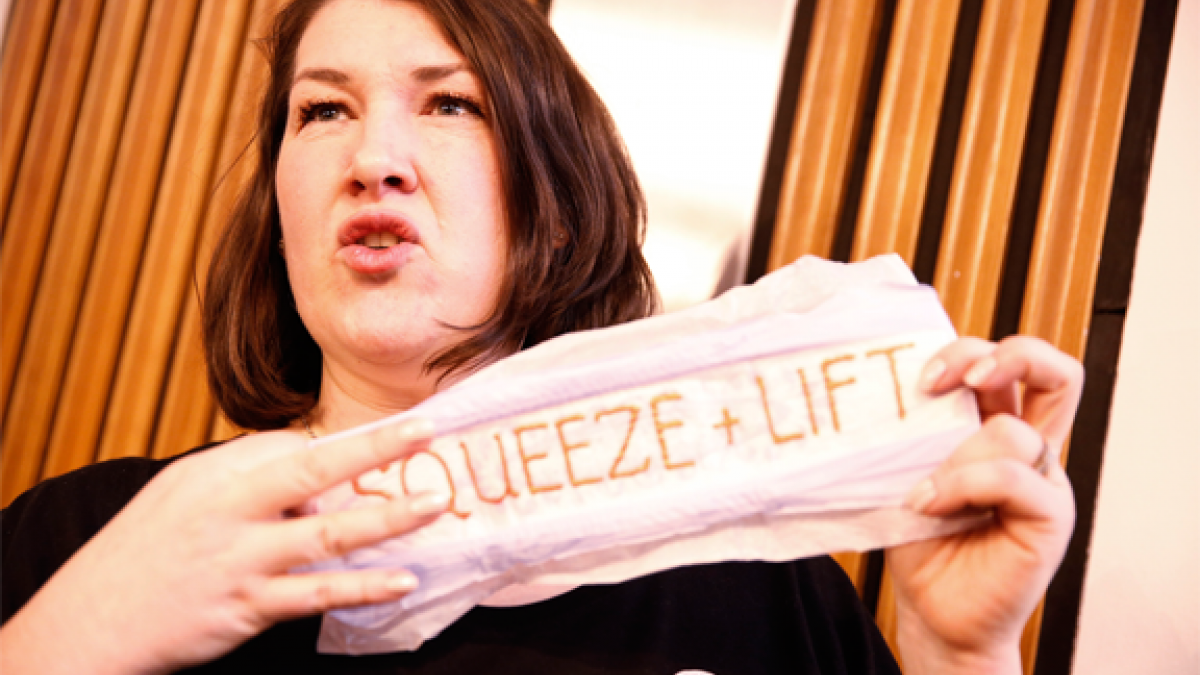 Elaine has just got back from touring Australia for her infamous act on incontinence. The comedian and CSP member dressed up as a giant vagina and used the suit she wore to help push powerful points about pelvic health to the audience of almost 100 visitors. Among them were specialist physiotherapists, representatives from professional bodies such as the Royal College of Nursing and several MSPs.

The show aimed to break down taboos which surround incontinence and sexual dysfunction by using humour. It was followed by a lively panel discussion featuring a range of experts in the field.

'Incontinence hasn’t been a public health priority because it’s not going to kill you,' she said. However, it has more of an impact on a person’s wellbeing than having asthma or diabetes. One in three women wet themselves, and most of them can be helped with physiotherapy.

'There are also unknown costs to the public purse - Australia spends $43billion a year [on this]. It is clear that investing in physiotherapy will save money.

'We need to start talking about it and events like this will surely help.'

Co-sponsored by members of Scottish Parliament Neil Findley MSP and Alex Cole-Hamilton MSP, the event aimed to encourage the Scottish government to do more when it comes to educating people, especially school aged girls and pregnant woman, about incontinence and other prominent women’s health issues.

'This is the issue that no one wants to talk about,’ Mr Findley said. ‘We can use this event as a platform for change. I want people to speak to each other and use the petition system to make an impact.'

Mr Cole-Hamilton added: 'Incontinence is not a condition that just affects elderly or infirm people. It can affect anyone in the room.

'I am delighted to find cross party unanimity in the debate and encourage the government to commit to a national strategy for incontinence including social awareness and public education.

Mr Findley also paid tribute to the Scottish Mesh survivors, some of which were in the room and contributed to the event.

For more information about the mesh crisis see: http://www.csp.org.uk/news/2017/05/12/scottish-transvaginal-mesh-implant-review-has-implications-clinical-practice-across-