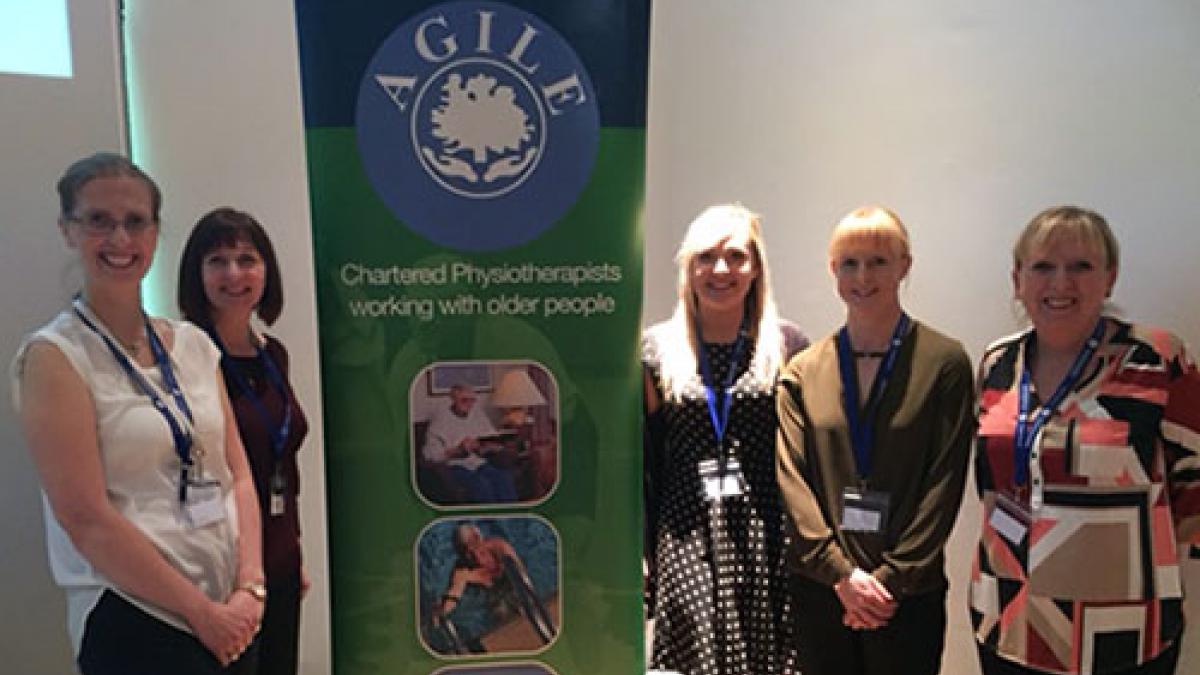 CSP members at the Agile conference in Newcastle

A person-centred approach is vital for the successful physical rehabilitation of people with dementia - this was one of the messages from clinical lead physiotherapist Jane Blakey.

Delegates discussed the importance of tapping into a patient’s long-term memory and of considering the rhythm and tone of their voice. Ms Blakey described how patients with dementia retain their hearing and are able to interpret facial expressions and non-verbal cues.

All types of communication should be used, she said, adding: ‘It is crucial that positive engagement techniques are used from the start of your communication with patients, even before your assessment begins.’

She said that people with dementia prefer firm, tactile pressure, particularly across the ‘key points of control’ – hands, pelvis and feet. This was because these key points were linked to a patient’s muscle memory and motor learning.

She highlighted the significant issue of pain in this patient group. The timeframe for effective rehabilitation led to a discussion, during which Ms Blakey illustrated research suggesting that a rehabilitation period of six months or more was needed for maximum outcomes.

Delegates heard that physios can do a great deal for patients in the advanced stages of dementia, such as improving posture management.

The relationship between gait and cognition was explored in a keynote speech by Lynn Rochester, professor of human movement science at Newcastle University.

She introduced three propositions of gait: as a cognitive task; as a measure of cognition; and falls and how rehabilitation should address cognitive impairment.

Professor Rochester began by looking at behavioural data to identify what happens in ageing and when cognitive function was also changing. ‘Cognition very much contributes to gait and therefore it contributes to some of the gait impairment we see,’ she told the conference.

She spoke about the increase in ‘white matter’ in the brain as we age and how this impacted on how different areas of the brain communicated with each other. ‘You need good information links between the frontal cortices of the brain as these have an impact on mobility,’ she said.

‘Any white matter interruption within the pathways that link all of the areas of the brain underpins a person’s decline in mobility and gait.’

Professor Rochester highlighted the significant impact of cardiovascular risk factors, such as inactivity, on mobility and cognitive decline.

A contemporary approach to rehabilitation should be linked to the understanding that cognition and gait were intimately related to each other, she said.

‘As our understanding has increased, it is starting to drive changes in physiotherapy assessment and intervention.’

Reducing the risk of falls

Delegates heard about a clinical trial, published in The Lancet, which explored the impact of virtual reality treadmill training on older adults at risk of falling. The trial, led by researchers at the Tel Aviv Sourasky Medical Center, took place across five clinical centres, including Newcastle University.

The researchers found that both actual and virtual reality treadmill training reduced falls, but that virtual reality had particular advantages for people with Parkinson’s.

Jane Cross, senior lecturer in physiotherapy at the University of East Anglia, began by explaining that the project, funded by the National Institute of Health Research, had a number of ‘work packages’.

The first focused on the design of an enhanced recovery pathway (ERP) and involved in-depth data collation.

This included issuing a freedom of information request to UK trusts to review their policies for hip fracture and dementia. The research team also spoke to staff, patients with dementia and their carers as part of an information gathering exercise.

Dr Cross highlighted some of the key findings from this data gathering, saying: ‘We need to think about early recognition and accurate diagnosis of dementia and delirium.’

She also said that healthcare professionals needed to involve carers and recognise their expertise.

As part of the ERP development research, the team carried out a ‘focused ethnography’ of what care looks like in an acute setting. A team of five academics and three peer researchers observed about 144 hours of practice.

Dementia and delirium gives rise to challenging behaviours which can impact significantly on staff, Dr Cross said. Meanwhile, staff on trauma wards said they were not adequately trained to look after people with cognitive impairment.

The many findings were broken down into a number of items which the team presented at a conference, designed to inform the priorities for the ERP, for patients with dementia and their carers.

The initial implementation of the ERP forms the second work package. A prototype ERP is now being trialled in acute trauma wards across three trusts and covers admission, pre-operative, post-operative, rehab and discharge phases.

‘The focus in these acute trauma wards is discharge and that is driving what rehab staff can and do offer currently,’ she said. ‘However, we can make improvements in acute settings.’

Dance and movement to connect to people with dementia

Identifying new ways to connect with people who have cognitive impairment can help to improve the relationship between physiotherapist and patient, dance movement psychotherapist Richard Coaten told the event.

He began by saying it was important to recognise the impact of dance on older people, adding that dance halls and social dancing activities may have been a regular pastime for many.

He advised that patients may not understand questions that involve their gait or balance, but by asking someone to move or dance helped to connect into their social and long-term memory.

Dr Coaten said people with dementia remained highly emotionally sensitive. ‘People are still able to feel and intuit, even though they may not be able to tell you that,’ he said.

Connecting into people’s feelings and emotions can be a useful tool for physiotherapists, he added.