Two physiotherapists are part of an NHS choir hoping to top the charts with a powerful charity single.

Lewisham and Greenwich NHS Trust Choir first recorded their song, 'A Bridge Over You', in 2013 after becoming the runners-up in Gareth Malone’s BBC2 TV series Sing While You Work.

The song, a mix of Coldplay’s 'Fix You' and Simon and Garfunkel’s 'Bridge Over Troubled Water', is now being re-released with hopes that it could become Xmas number one.

More than 160,000 people have already signed up to buy the single when it is released on 19 December. Last year’s number one had 215,000 downloads.

The choir also made the music video featuring NHS staff caring for patients at the South London trust. 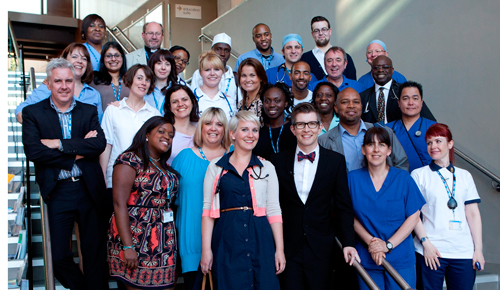 Community paediatric physiotherapist Caroline Smith, who is one of two physios in the choir, explained that when it was first released the song didn’t get much of a following.

But it was recently spotted by a junior doctor in Cambridgeshire, Harriet Nerva, who was so moved by the video that she decided to launch a social media campaign to promote the song and the reasons for supporting NHS.

‘The song sums up everything about working in the NHS, it’s about raising the profile of the NHS at such a time of change,’ said Ms Smith.

NHS staff are being urged to back the campaign by promoting the song, and, of course, by buying it through iTunes or Amazon.

‘But everyone is requested not to download the song until the week before Christmas to give it the best chance of becoming the Christmas number one,’ added Ms Smith.

Proceeds from the 99p single will go to Mind and Carers UK, as well as local charities.