Right To Rehab Day of Action secures support from MPs

MPs are backing the CSP’s call to improve ongoing care outside of hospital for people with long-term conditions.

A hard-hitting new report, published today by the CSP, Royal College of Occupational Therapists, Sue Ryder, and a collective of 21 charities, trade unions and professional bodies, asks MPs to ensure the NHS delivers on patients’ right to community rehabilitation.

The report warns that failing to provide these services can have devastating consequences for people’s lives, and bring greater costs for the NHS and social care systems.

The NHS does a fantastic job of treating and caring for patients and it is important that this care continues and is carried over into rehabilitation and ongoing care for people with long-term health conditions. The government needs to ensure that proper funding is provided to our NHS so essential at-home care for patients can be provided. It is often just has important as the treatment received in hospital.

The report was presented to MPs at an event in parliament, where they watched a virtual reality film featuring Elizabeth Printer, who suffered a debilitating stroke at the age of 46 in 2011. She lost her career and family as a result of insufficient after-care.

As a former Public Health Minister, I know that the NHS does so much good for the people of this country, but I also know that rehab matters, and this is an area where real improvement is needed. It is vital that people get the rehabilitation they need, or the NHS will pay the price in the long term.

To coincide with the release of the report, new research by the CSP has found almost half (44 per cent) of people who said they did not receive sufficient rehabilitation after diagnosis or discharge from hospital felt “abandoned by the system”.

It says only 29 per cent felt they received completely sufficient rehabilitation, and showed stark differences between the experiences of those who did receive it and those who missed out.

The report and poll show:

'Everyone should get the rehab they need to live life to the full and be as independent as possible. It is essential that in the next decade we witness a radical transformation in provision to ensure no-one misses out. It’s not acceptable that we are missing opportunities to improve lives.' 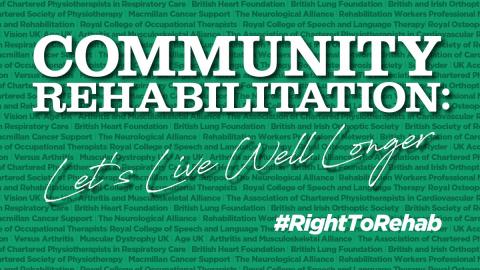