In her wide-ranging ‘state of the nation’ address, CSP chief executive Karen Middleton also showed the humanity all physios feel in treating their patients as she spoke of her own mother in law’s experience of rehab following a stroke. 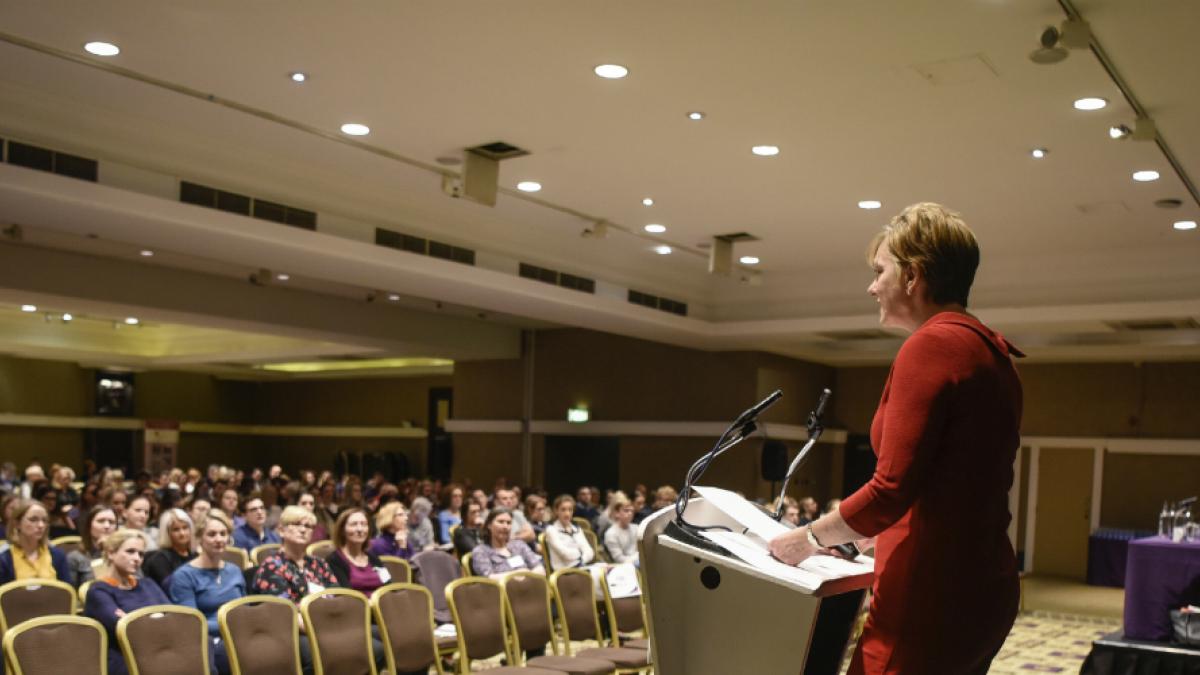 But alongside that she gave a strong message that the CSP would continue to fight hard for its members’ rights, their pay, and for adequate funding of the NHS.

At the society’s annual representative conference in Manchester, Ms Middleton outlined the work undertaken by the CSP on behalf of its members in the last year.

Top of the list was placing physios in general practice. ‘CSP members saw this opportunity and stepped up to it, and you did’ she said. ‘I cannot over-emphasise the importance of this work to our profession.’

2017 had also seen the launch of CSP’s Leadership Development Programme, funded by the CSP Charitable Trust. ‘I was blown away by the impact members who had been on the course were now having,’ she told delegates.

Additionally she acknowledged the efforts to ensure sufficient numbers of physios coming through the system.

‘We estimate that across the UK and across all sectors we are short of around 4,000 registered physios. Brexit and visa restrictions could exacerbate the shortage,’ she said, acknowledging the contribution of non-British nationals to UK physiotherapy.

Last year and this year presented some of the biggest challenges yet, with the NHS at its most vulnerable and demand still rising.

‘I am sick and tired of hearing the phrase that trusts are in debt,’ she said. ‘Basically they are pushed into providing more care than they are paid for. More money for the NHS is largely a political choice. If I hear one more time that the NHS needs to drive up productivity…well, NHS productivity is actually already higher than the rest of the economy!’

But members had to do their best despite that. ‘Part of being a clinical professional is ensuring you are providing best value regardless,’ she said. ‘It’s not an either/or, it’s an and.’

The workforce bore the brunt of this ‘perfect storm’, she said. ‘You have endured the longest government imposed cap on public sector pay in history. A two-year freeze followed by five years with increases capped at one per cent.

‘The CSP will continue to campaign on your behalf and support you to cope. And we have the backing of the TUC to support us.’

But the reminder of her compassion as a physio came in her comments on CSP’s #RehabMatters campaign, which was launched just as her own 93 year old mother-in-law had a stroke last March.

‘Over six weeks in hospital at Milton Keynes I saw intensive rehabilitation transform her physically and mentally. She went back to her bungalow, for a further six weeks’ rehab, and now has two carer visits a day. She is still largely independent.

‘I believe passionately that physiotherapy should not simply be about adding years to life. We must add life to those additional years. And I see physiotherapy leading the rehabilitation agenda.’