Staff at UCLH’s stroke rehabilitation unit, including physio assistants, have become the first in the NHS to use robotic devices in conjunction with more traditional therapies to help patients regain arm and hand movement. 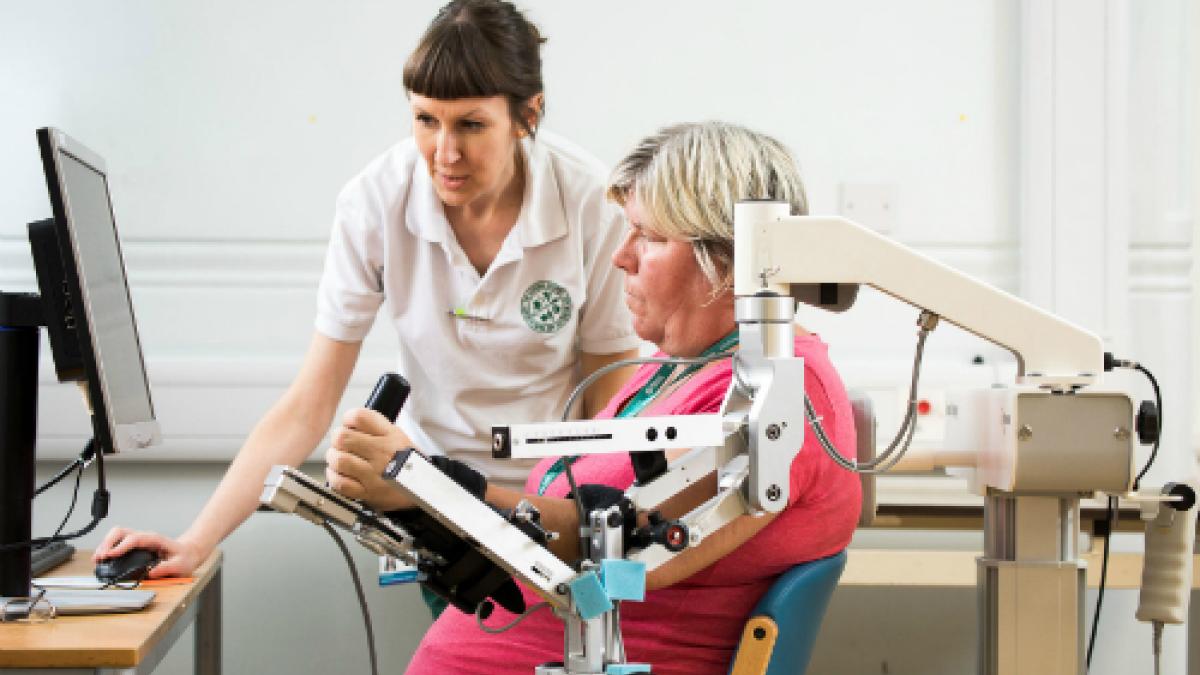 An occupational therapist supervises a patient as they use the robotic device. Photo ©UCLH

The robots, which help patients practise exercises to build up strength and dexterity, can be supervised by a physiotherapy assistant and were introduced as part of UCLH’s intensive three-week upper limb neuro rehabilitation programme.

The unit’s consultant neurologist Nick Ward explained that most rehabilitation focused on walking and balance rather than arm and hand movement. This programme, set up four years ago, was a response to that.

The patients, most of whom will have suffered a stroke more than a year ago, attend every day for three weeks, receiving 90 hours’ intensive therapy. Over 200 patients have now been through the programme and over half have shown significant gains in movement.

‘These people have been told there’s no longer any change possible but this programme shows quite clearly that we have written these people off too early,’ said Dr Ward.

The devices – the Armeo Spring rehabilitation robot and four smaller pieces of equipment made by Tyromotion – help patients carry out repetitive exercises while keeping them motivated and interested, said consultant physio (rehab and stroke) Fran Brander.

But she stressed they were always part of an individual programme devised and overseen by a qualified therapist. ‘It enhances what we have been working on and gives the patient more intensity. But we don’t believe technology is the be all and end all – it just adds another tool in the toolbox.’ The unit’s skill mix hadn’t changed as a result of introducing the robots.

Technology is no threat

‘Therapists shouldn’t see them as a threat and, to be honest, they’re so expensive most NHS departments can’t afford them anyway. If I were a boss I’d rather pay for a therapist than a robot because you’re going to have better outcomes.’

The Armeo Spring and Tyromotion robot devices cost £170,000 in total and were funded by the UCLH’s charity arm.