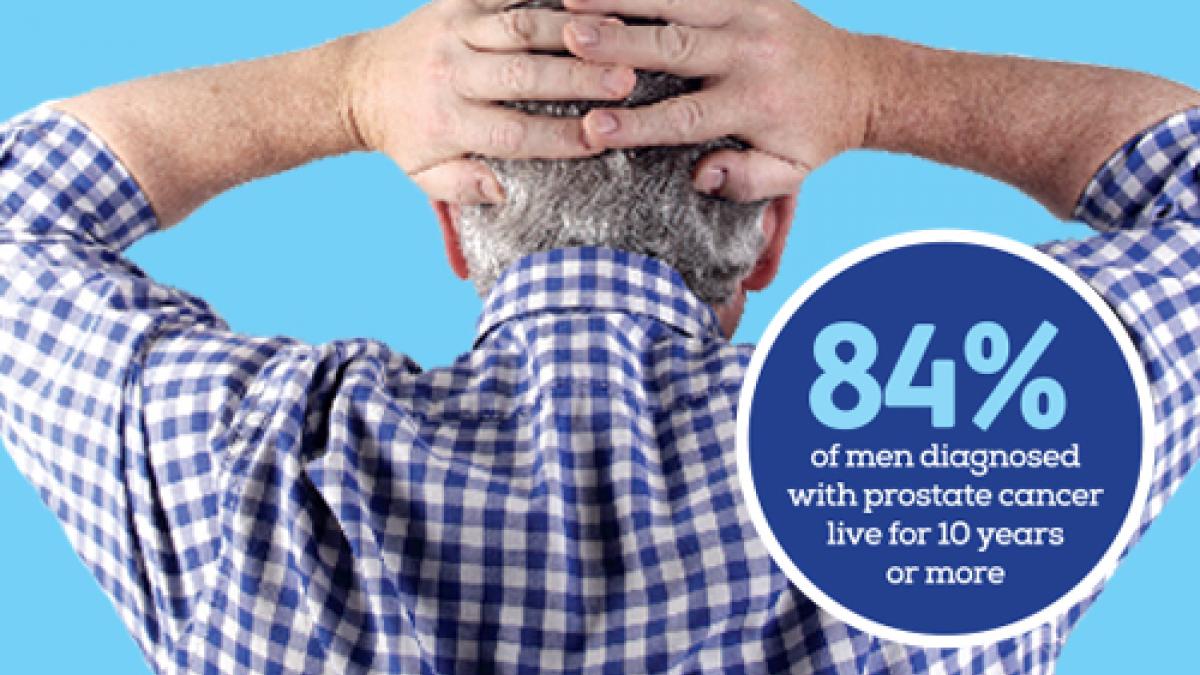 Prostate cancer is the most common cancer in men in the UK and the second highest cause of cancer-related death in men. Yet despite its prevalence, it is also highly survivable, with figures from Cancer Research UK showing that 84 per cent of men diagnosed with the disease live for 10 years or more following treatment.
Indeed, it would be easy to assume that the needs of these patients are being adequately met. But this may not be the case, says specialist prostate cancer physio Helen Whitney. ‘Research on men’s health behaviours has shown that men are more hesitant than women about seeking support or advice about their health,’ she explains. ‘They may have cancer needs and physical symptoms but they don’t always access the services that are out there.’
The underlying reasons are not yet fully understood but Ms Whitney believes that societal pressures and perceptions of masculinity have an influence. ‘Men tend to keep their concerns to themselves, because if they say they are unwell or have a worry it might be seen as weak.’
The charity Prostate Cancer UK is trying to tackle this problem, funding an 18-month project that aims to improve rehab for men with prostate cancer. Ms Whitney leads the project, which is a collaboration between St Joseph’s Hospice and Barts Health NHS Trust. Since starting in April 2014 it has focused on four east London boroughs: Hackney, Tower Hamlets, Newham and Waltham Forest.
Before launching their pilot rehab service Ms Whitney and support worker Thufayel Islam investigated what services were available in the area for men with prostate cancer. This was followed-up by questionnaires, interviews and focus groups to discover how many men were using these services and if they had unmet needs. The findings showed that few men had accessed existing rehab services during the previous financial year.
A number of reasons were identified. Men were not receiving adequate information about their condition and support services. In addition, health professionals did not refer many to local rehab services. And focus groups revealed that psychological concerns relating to fear, worry and sexuality were often not addressed. ‘We learnt that it’s important to engage men individually with face-to-face contact, as they tend not want to seek support from groups,’ says Ms Whitney.
To fill the gaps in the care pathway the project set out to develop rehab services that would appeal to men, increase referral rates to local services and improve symptom management, psychosocial wellbeing and physical activity rates. Ms Whitney established health and wellbeing clinics, to provide health-promoting information to men with prostate cancer, and a one-to-one outpatient physiotherapy service at Barts Health NHS Trust. She also started targeting local clinicians and health professionals by providing education sessions about the rehab needs of men with prostate cancer and the services available for onward referrals.

Radiotherapy and/or hormone therapy are usually used to treat prostate cancer, says Ms Whitney. Both approaches can affect sexual and urinary function, and radiotherapy can affect bowel function. As a result, the one-to-one physiotherapy sessions aim to address lower urinary tract symptoms, urinary frequency, urgency, incontinence and other issues that commonly affect patients.
During the sessions Ms Whitney offers advice on subjects such as pelvic floor exercises, bladder training and core strength training following a prostatectomy (surgery to remove the prostate). She points to research showing that exercise can reduce the risk of prostate cancer disease progression by 57 per cent and reduce recurrence and mortality rates by 30 per cent. Each patient’s function is assessed and Ms Whitney suggests ways for them to increase their physical activity.
‘We do a baseline of how much activity they are doing in a week, and then we measure it again six months later. And we give them graded exercises to do, set goals and find ways to increase their general activity levels.’ This can include referring men for exercise on prescription at local gyms or to community initiatives such as walking groups.
Ms Whitney says the hormone therapy used to treat prostate cancer (androgen deprivation therapy) can result in many side effects, and these often cause men psychological distress. ‘It can lead to the symptoms of the menopause: hot flushes, osteopenia, weight gain, mood swings, reduced muscle mass, hair thinning, gynecomastia [swelling of the breast tissue], fatigue and low libido.’
Consequently, men commonly express concerns during the one-to-one physio sessions about the impact of hormone therapy on fertility and virility, as well as worries about incontinence and erectile dysfunction after prostate surgery. As a result, Ms Whitney frequently refers patients on so they can receive medication for erectile dysfunction, penile rehab devices or psychological support.
In addition, she helps men with urinary problems to prepare for radiotherapy. They receive hydration advice and practise urge suppression. Ms Whitney says oncologists have anecdotally reported that the training appears to reduce urinary symptoms following radiotherapy. ‘We are looking into the possibility of running a research trial to see if it has a clinical impact,’ she explains.

The project has produced impressive results. In the last six months more than 140 men have attended the physio sessions and the health and wellbeing clinics have proved popular; the most recent one attracting more than 40 men and their partners. Six months after their first assessment men participating in the pilot had increased their physical activity level by an average of 209 per cent.
In addition average urinary symptoms six months after physiotherapy had dropped to a ‘mild’ category of severity compared with ‘moderate severity’ on initial assessment. Participants also reported improved confidence to self manage their side effects, improved social support and a reduced number of unscheduled visits to the GP. Ms Whitney hopes the pilot will lead to a permanent service and inspire similar ventures elsewhere. ‘The ideal would be to develop an oncology physio outpatient service,’ she says. ‘Barts already offers an outpatient physio service for breast cancer but it would be great to also open the doors to men with prostate cancer.’

Peter Gerard (not his real name), 52, was diagnosed four years ago and had a prostatectomy. He became incontinent and was unable to return to work. As a consequence he went through a phase of emotional and mental health difficulties. His activity levels dropped, and he became depressed and isolated. Despite raising his concerns with his GP, they weren’t adequately followed up. ‘After the treatment I wasn’t directed or supported much with regards to my rehabilitation,’ he says.
Fortunately Mr Gerard was referred to the pilot project after visiting his oncologist. He was taught graded pelvic floor exercises and bladder training and invited to a health and wellbeing clinic. The group gave him education on fatigue, physical activity, emotional wellbeing and motivation through a shared experience.
Three months after his first physiotherapy assessment, Mr Gerard says he is no longer experiencing urinary incontinence. As a result he feels more confident about completing his daily activities. His fatigue levels have also decreased and he is now regularly exercising at his local gym, via an exercise on prescription referral. And he hopes to return to work.
‘This service has given me a new lease of life, it has given me the confidence to go out and look for work,’ says Mr Gerard.
‘And I got a lot from talking with other guys with prostate cancer.’