Rehab services: are they keeping pace with better responses to major trauma?

Thanks to an NHS-wide redesign, more people are surviving after a major trauma. But are rehabilitation services keeping pace, asks Graham Clews. 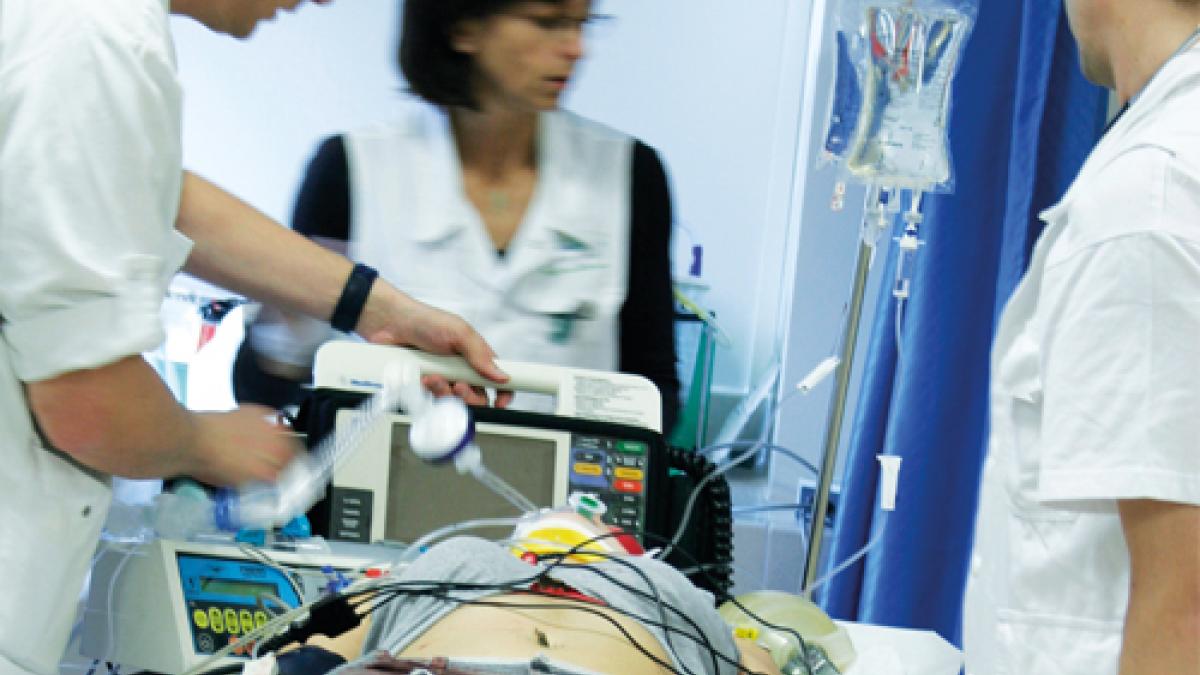 The complexity of working in trauma centres requires highly-skilled staff. Photo: BSIPSA/Alamy
Six years ago, London became the first place in England to create a system of trauma networks, which saw patients with major trauma receiving treatment at one of four highly specialised trauma centres.
The new major trauma centres operated 24-hours, seven-days-a-week, with consultant-led multidisciplinary teams treating victims of car accidents, shootings and stabbings. Two years later, in 2012, the rest of England followed suit, with 22 new centres opening as a result. What’s emerged has been impressive. An audit by the Trauma Audit and Research Network (TARN) published in 2014 found that as many as 300 lives a year have been saved as a result of the major trauma network.
And TARN’s 2015 audit concluded that the chances of a major trauma patient in England surviving following treatment in 2014-15 were 63 per cent higher than in 2008-9. But what about the rehabilitation of those patients, and has the rehab of trauma patients more generally been affected by the concentration of specialist services in a smaller number of centres?
Lucy Silvester is a therapy consultant in the major trauma and orthopaedic service at St George’s Healthcare Trust in south London, one of the capital’s four major trauma centres. She says that, from an acute physiotherapy point of view, the complexity of work has definitely increased and the physio team at St George’s has had to upskill.
‘At St George’s we have started a band 6 trauma rotation for both physios and occupational therapists (OTs) so that they can share expertise across different areas of neurosciences, trauma orthopaedics, plastics and respiratory,’ she says. ‘And we’re hoping to start one in senior health, because we have found that over a third of our major trauma admissions are over 65, so there is a big cohort of senior health coming in under the major trauma banner.’
But Hannah Farrell, therapy lead for major trauma at Queen Elizabeth Hospital Birmingham (QEHB) and clinical specialist physiotherapist in neurotraumatology, points out the flip side to the reorganisation. Before the network, patients with head injuries, complex orthopaedic requirements, trauma and spinal injuries would go to a larger range of hospitals for acute care, but now they are treated only at major trauma centres.
‘Then at the point at which the care switches from being mainly medical or surgical to more rehabilitative, there is a push to repatriate patients, either back to their local hospitals or specialist rehab units. This is where there are huge differences and there are concerns that therapists who would have seen the occasional head or spinal injury don’t anymore and there is concern about deskilling,’ she says.

A 2010 National Audit Office report cited ‘unacceptable variations’ in rehab, and criticised a lack of evidence on what was available and how well patients’ needs were met.
A suite of National Institute for Health and Care Excellence (NICE) guidelines on trauma care in England was published earlier this year. It called on hospital trusts and commissioners to provide specialist trauma rehabilitation services for patients, and it recommended further research is carried on into why some major trauma patients fail to get the rehab they need.
One of the biggest problems facing trauma rehabilitation is the lack of guidance for hospital trusts and commissioners on required standards. Neither NICE guidance, nor TQuINS (Trauma Quality Improvement Network System), which operates a peer review quality assurance programme for trauma services, contains any substantial guidance on rehab.
Ms Silvester says rehabilitation was raised as an issue at the time of the creation of the London trauma network, but it was ‘put in the all too difficult box’, as rehab often is. ‘Funding rehab is not people’s priority, we keep battling it for it but there are big gaps in the pathways,’ she says. ‘In our areas some boroughs have massive gaps, but other boroughs or counties are really well set up. It’s just so variable. From my point of view, going into community services, trauma is such a small percentage of their workload. Hip fracture and stroke pathways are really well established and they see a lot of those patients on a regular basis, but they just don’t see that number of trauma patients.’
Peter Wareham is director of rehab for the Wessex trauma network, as well being a clinical specialist for the Wessex Rehabilitation Centre, a musculoskeletal (MSK) intensive rehab centre at Salisbury District Hospital. He is currently writing a clinical rehab pathway for the network for patients with complex MSK issues or polytrauma at the Wessex centre in Southampton.

Patients discharged from the centre could go anywhere in the Wessex region, to any outpatient department, and to any hospital, and Mr Wareham says patients with quite complex and significant injuries can be offered only standard 20-minute physio appointments, with perhaps the occasional hydrotherapy session. He hopes the clinical pathway will help him and his colleagues push for adequate treatment for these patients.  ‘I would hope you could audit against it and use data to show what services exist and I would expect it to show that there are insufficient MSK services, but that is a national, and not just a local, picture,’ he says.
Ms Farrell says the improvements in acute treatment of patients since the introduction of the major trauma networks has meant the rehab requirements is often ‘more complex than we have ever seen before’.
The QEHB embarked on a six-month study of its ‘hyper acute rehab’, focusing mainly, but not solely, on patients with major trauma. Preliminary findings are that about one third of patients who clinicians hoped would go to specialist rehab never got there, even if they had been referred, because of a lack of beds.
Further resources from commissioners have been found to fund extra physios, OTs and a dietetic and a speech and language therapist to work as part of what is being called SHARP (specialist hyper acute rehabilitation pathway).
‘As a result of improved coordinated medical care and the introduction of major trauma centres we have complex patients who are surviving and who might not have survived and we are rising to the challenge of meeting their rehabilitation requirements,’ Ms Farrell says. ‘It’s probably a bigger challenge than we ever imagined, but we are striving to meet it and we are learning all the time. I qualified 20 years ago and I am still learning every day.’