If anyone knows about exercise, it’s a physio. Gill Hitchcock headed to the East Midlands, where CSP members are revolutionising the art of gym coaching. 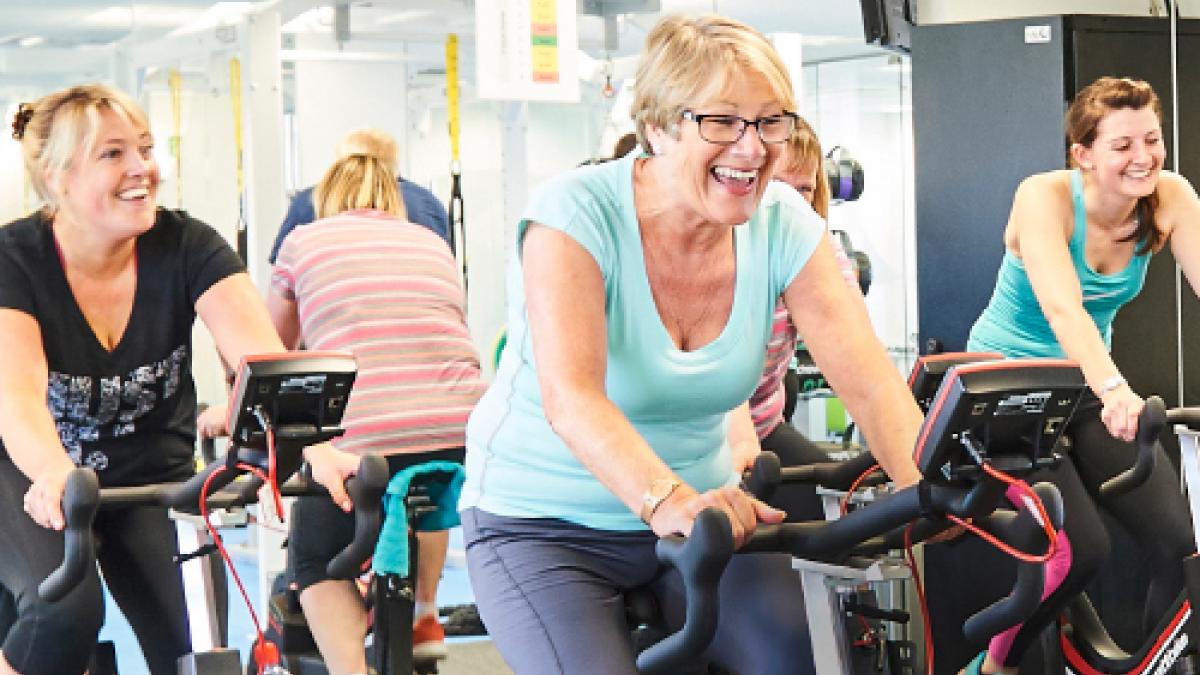 It’s a chilly autumn morning outside, but in a brand new gym in Birstall, Leicestershire, a small group of people are sweating their way through some challenging exercises. From bikes, to steps, then weights, they work on under the watchful eye of their instructor. But this is no ordinary gym, no ordinary instructor, and the perspiring participants aren’t typical gym bunnies.
One of them has Parkinson’s; another feels very unconfident about exercising; and two more have entered their 60s without exercising properly for, well, let’s say a very long time.
The gym, Bridge4, and its guided exercise programmes are the brainchild of Judith Pitt-Brooke, a former CSP Council member who’s convinced that putting physios into gyms as exercise professionals could yield great results.
‘Our target market is people who don’t “do” gyms; ageing people and anybody who needs help or motivation to be more active or exercise to a higher intensity,’ she says. ‘We do carefully programmed, high-intensity, evidence-based class work using the latest science about exercise and managed by physiotherapists.
‘Through sports and occupation al health work, I became increasingly confident that the root to improving people’s health – whether they are athletes or people with comorbidities – is all about exercise. And as a physiotherapist, it’s about clinically-prescribed exercise.’
Leading this morning’s class is James Du Bois Hylton, a qualified fitness instructor and physiotherapist, who previously worked with young disabled people at Leicester General Hospital. For him, Bridge4 is special because he can provide individual attention to people with a wide range of abilities, and help to motivate them not just to get rid of pain or cope with a condition, but to become stronger and fitter.
‘It’s a lovely atmosphere because people are more accepting of the fact that they might be coming with certain conditions,’ he says. ‘And a lot of the clients here, when they have gone to normal gyms, have felt very isolated, stared at, not sure what’s going on.’
Ms Pitt-Brooke regards herself as ‘a bit of a mongrel’ in the physiotherapy profession. Her career has shifted from neurology, to teaching and, after a masters in business administration, to setting up her own occupational health business. Her clients included PepsiCo and Leicestershire County Cricket Club. The idea for Bridge4 came more than two years ago, and she started trading earlier this year, with the chair of the cricket club as her business partner.
‘Our strapline is that it’s a different kind of gym,’ she says. ‘Our mission is to change the focus of exercise from body beautiful to the health benefits. I feel very strongly, we have to change attitudes towards exercise, so that as we get older, yes it might hurt a bit, but actually it’s hurt not harm.
‘Predominant attitudes to exercise within the medical profession over the past 30 years have been that, as you get older, you need to take it easier. But all the evidence has shown us that is wrong. Whether you’ve got chronic arthritis, a cardiac condition, respiratory problems, balance issues or Parkinson’s, all the evidence points to the fact that exercise is the best medicine.’

Swimming is ‘fine for fish’

But what about a conventional gym or local swimming pool? After all, they are probably cheaper. Ms Pitt-Brooke responds that many gyms offer high-intensity exercise, but everything is targeted at younger age groups. It’s very macho and a lot of people get injured.
When it comes to instruction, an exercise professional is not a clinician, and many of them won’t know anything about arthritis, she argues. Most of them don’t have any awareness of the impact on a 45 year-old’s tendons of doing high-intensity exercise if they have not done it for 20 years.
As for swimming, Ms Pitt-Brooke says that’s fine for fish. But for human beings who want to remain fully fit it’s not a very effective form of exercise, unless you build muscle by going super fast.
Bridge4’s services are very different. Its ‘fundamentals programme’ starts by offering a 60-minute one-to-one session with a physio. The programme then takes people through 45-minute physio-led exercise sessions in groups of up to six. Gradually, the intensity of the strengthening and cardiovascular work is increased, until people are ready to move to the next level.
‘I would argue that fundamentals is part of rehab,’ says Ms  Pitt-Brooke. ‘I’ve got a 75 -year-old man who has had two hip replacements. After he joined, we did a one-to-one and he is in the fundamentals. His wife, in her late 60s, used to be very active but wouldn’t go to a gym and was slowly becoming more sedentary. Now she is doing fundamentals and comes once a week.
‘Another example is a 50-something woman with chronic back pain. She has been through all the specialities, including pain management, and been advised to exercise more. Keeps trying to go to a gym, but nobody supervises her enough. She has come up through fundamentals and is now in the what we call the Bridge45 class doing high-intensity exercise.’
Up on the first floor, above the gym, Bridge4 offers physiotherapy and Pilates designed for people with a range of neurological conditions. Josie Ledbetter, neuro physiotherapist at Bridge4, says the idea is to extend the treatment delivered through the NHS with longer-term rehab.
‘I was in the NHS and I loved it, but I did feel restricted by what I could do,’ Ms Ledbettter says. ‘You are restricted by funding and there was a huge amount of pressure to see a lot of people in a short period of time. Discharge planning, I felt, was very early at times.
‘Being in the private sector – although you do have to accept that people have to pay – I think, this is actually value for money.’

Membership fees for Bridge4 range from £29 to £70 a month, with the cost of fundamentals and other sessions rated accordingly. They could be as low as £5. While the Parkinson’s Pilates classes are subsidised by charity Parkinson’s UK and cost £12, physiotherapy treatment with Ms Ledbetter is priced at £65.
‘You could pay more than this go to the hairdresser’s for an hour and you’re getting a huge amount of lifestyle change out of it,’ Ms Ledbetter adds.
Meanwhile, this morning’s exercise session has ended and the participants reach for their towels. Karen Gavin wipes her forehead. She has been coming to Bridge4 for two months. Each week she attends a Pilates class for people with Parkinson’s, plus two fundamentals sessions.
‘This has been a good work out, particularly for my legs,’ Ms Gavin says. ‘I had been falling two or three times a week before I came here, but after the regular workouts I haven’t fallen at all.
‘There are so many different types of Parkinson’s, it’s like an umbrella term and the Parkinson’s group I go to here represents that. And the staff – and there are always two – are able to offer quite a bit of help.
‘I think it’s a great place, with a nice atmosphere and staff are very good at being welcoming.’ fl

For details of the clinic see www.bridge4studio.co.uk