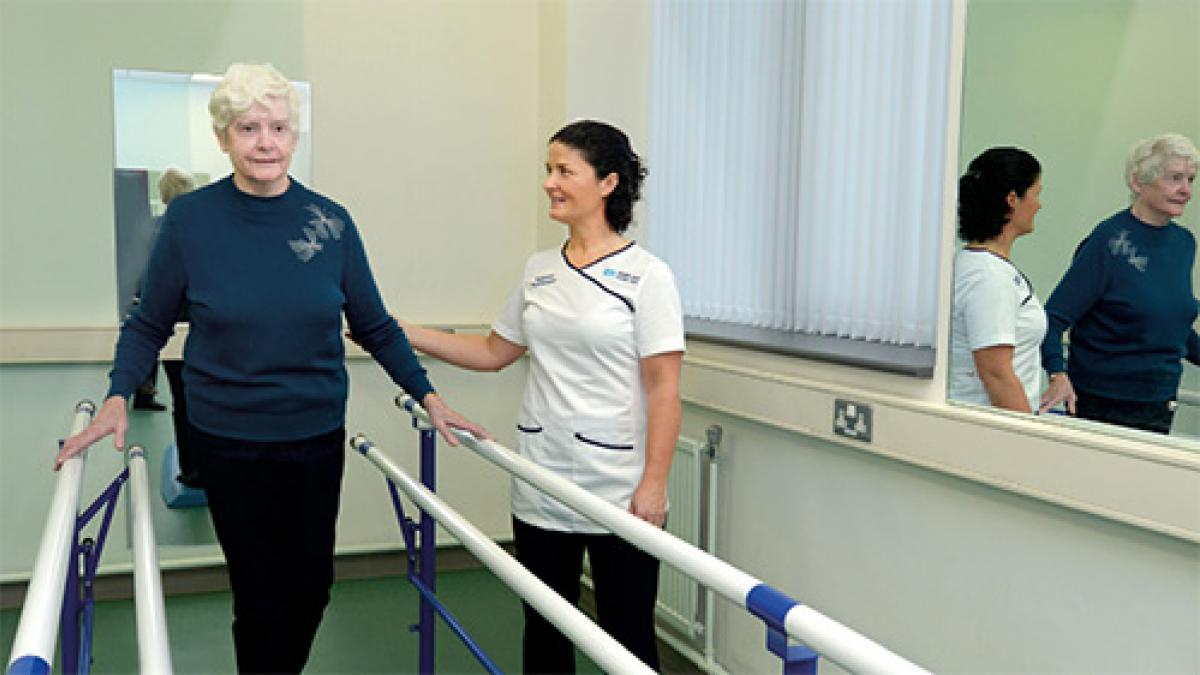 A care pathway, based on a CSP falls tool, has won the support of managers in one trust so effectively that it is being rolled out across Northern Ireland. A 'proof of concept' pilot, which started in 2012 at Southern Health and Social Care Trust with the Northern Ireland Ambulance Service (NIAS), will be implemented throughout the region by April.

Up to 400 paramedics now work with allied health professionals (AHPs) to avoid hospital admissions and provide more care in the community for older people who have fallen. Before the pilot, paramedics who saw a person after a fall took them to a local emergency department or, if they refused to travel, left them at home with no follow up.

The pilot relied on the paramedics completing a client assessment, and if no serious injury was identified requiring emergency department attendance, and with the clients' consent, paramedics completed a referral form for the trust's falls co-ordinator. This was faxed to the falls co-ordinator who would provide telephone screening and, as appropriate, referral to a consultant-led falls clinic or to community staff for secondary falls prevention input.

'As a proof of concept model it proved useful, but low referral numbers and delays in the process needed to be improved on,' said Southern trust's AHP falls service lead Cathy McKeown.

During the pilot, plans were worked on to improve the timeliness of referrals and to make the process more user- friendly to encourage increased numbers of referrals.

By this time the Keogh review of urgent and emergency care and the Donaldson report were identifying the need for less reliance on acute care and more emphasis on 'see and treat' in the community, explained Ms McKeown.

By May 2015, a pathway was established where paramedics could telephone a central base which sent an email to the falls co-ordinator with details of the fall and consent for follow up.

'Falling is number one for 999 calls in Northern Ireland,' NIAS clinical service improvement lead Ciaran McKenna told Frontline. 'Before the pathway we took fallers to the emergency department which was often the wrong place. It may not have been a great experience for them.

'As well as potentially adding to delays in the emergency department, they weren't accessing specialist care. Otherwise, they were left at home with no follow-up.

'Now patient care, safety and experience is enhanced. It's a win-win. This pathway has enabled us to provide all three.' Last year, the number of referrals of older 'fallers' rose steeply compared to the 2015 figures, standing at 1,015 by 1 December. Every time an emergency department attendance is avoided saves the trust £115, while avoiding a hospital admission saves £1,400 and every hip fracture prevented saves at least £13,000.

A big proportion of our frail elderly patients are reluctant to admit to falling. They're proud and have a great fear of losing their independence and going in a care home.

Since 1 June 2015 the pathway has potentially saved £390,000 through secondary fall prevention interventions. The proportion of people aged over 65 year is due to increase by 15 per cent in the region by 2020, with the highest rise expected among those aged more than 75. In 2014, of the £38 million spent on falls by Northern Ireland's health service, £33 million was spent on people aged 75 years and older. 'More than 80 per cent of those referred by NIAS are over 75 so we are identifying the very high risk fallers,' said Ms McKeown.

'We are now able to get 98 per cent of these fallers to engage with our falls co-ordinator in Southern trust.' This has been achieved mainly by speeding up the referral process.

'A big proportion of our frail elderly patients are reluctant to admit to falling' said Ms McKeown. 'They're proud and have a great fear of losing their independence and going in to a care home.'

In Southern trust, close links developed between its specialist falls team and paramedics. NIAS is very pleased, says Ms McKeown, to have developed a regional pathway.

Training for paramedics continues, including postural hypotension and in the Timed Up and Go test. This should promote staff confidence and knowledge of the pathway, she said

'As paramedics become more confident with leaving clients in their own home knowing they will be followed up by the specialist team, numbers accessing the service and benefiting from the input in both the short and long term should continue to grow.' Feedback from those who have gone through the pathway had been very positive.

'Cathy [McKeown] is the innovator,' said NIAS's Ciaron McKenna. 'It was all her idea, she's the driving force. On the back of her work its spread to the other trusts. 'She's very modest but she's the brains behind it.'

The initiative used CSP's falls tool, which calculates how much you can save by developing new ways to look after people at risk of falls.

Cathy McKeown explains: 'The information in the falls tool allowed me to speak with confidence to commissioners and managers in other trusts when I was asked by NIAS to present to them.

'This enabled us to get their support for the role out of the pathway to the other trusts in the region. 'I knew I could rely on the accuracy of the falls tool figures and they were most impressed that I was able to provide them with this information.'www.csp.org.uk/node/842894.

In 2014 in Northern Ireland 30,418 patients attended the emergency department as a result of a fall-related injury. 12 per cent required hospital admission with one per cent sustaining a hip fracture. There is a 20-50 per cent mortality rate associated with hip fractures within one year of injury, with rates highest for the frail elderly. With 30 per cent of people aged 65 years and older falling every year, increasing to 50 per cent of those aged 80 years and older, fall prevention strategies need to be implemented across communities. Someone who has already fallen is at even greater risk of falling again, so the pathway is aimed at secondary prevention for those in the highest risk category.

What happens in Southern trust?

The falls co-ordinator receives 99 per cent of referrals within two days of the fall and screens all of them via telephone contact with the patient or their next of kin within two working days. Those identified as requiring an urgent consultation with a geriatrician can be seen for a full multi-disciplinary falls assessment within 72 hours.

Others can be referred to their GP or pharmacist for a medication review, seen at clinic by the multidisciplinary specialist falls team, or given advice and reassurance. They can also be seen in their own home by the community physiotherapist for a gait and balance assessment or by a community occupational therapist for an environment safety check. Mobility aids and equipment for the home can also be provided.

All staff aim to reduce the risk of another fall in keeping with National Institute for Health and Care Excellence guidelines.