Gill Hitchcock reports on an award-winning unit for older people in Dorset where staff are happy to break down professional barriers. 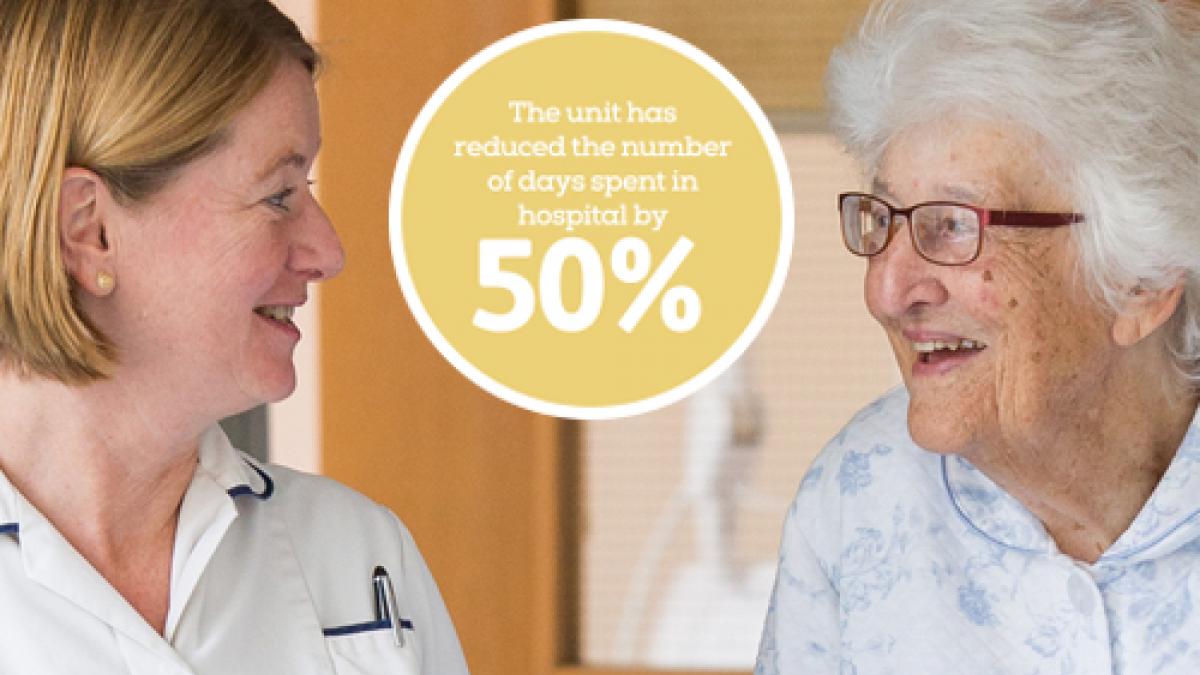 Why did NHS England’s medical director Sir Bruce Keogh single out an older people’s unit at a Dorset hospital for praise? And what set the unit apart so that two years ago it won a national prize for patient-centred care?
Well, one reason is that since it opened in 2010 the Rapid Assessment Consultant Evaluation (RACE) unit at Poole Hospital NHS Trust has halved the average number of days that its patients – typically aged over 80 – spend in hospital. What used to be a 14-day stay is down to eight.
And within 48 hours of admission more than half of its patients go home with a comprehensive care package.
It’s impressive, particularly as many of those admitted are vulnerable. ‘The patients we’re talking about are people who in days gone by would be living in nursing homes,’ says occupational therapist (OT) Nicola Bryan.
‘It’s not unheard of to see people aged 100-plus on this unit, who are still living at home with significant packages of care, with significant equipment. But their wish is to be at home and it’s really humbling to be able to provide that service to people and listen to their wishes.’
How is this achieved? RACE has 24 beds and a three-bed ambulatory clinic, taking from 360 to 400 admissions each month from the hospital’s emergency department or through GP referrals. Of these, up to half are referred for therapy.

Senior physiotherapist Pippa Collins explains that RACE is geriatrician-led, and that patients can be fast-tracked to diagnostics and treatment within hours.
While the unit usually has three to four therapists plus support staff on duty each day, because it has high priority staff can be pulled from other older people’s wards if additional support is needed.
But here’s something really significant: the way the unit’s staff share their expertise. ‘For me multi-skilled or collaborative working is the only way the service can function if we are to focus on our patients, rather than our separate bunkers,’ says Ms Collins.
‘In terms of therapy, one therapist should be able to assess patients physically and cognitively. They should be able to find out what patients need, how they can be discharged.’
Ms Collins says she is proud that all the therapists have developed skills that have traditionally been ‘owned’ by one particular health profession. Ms Bryan argues this sharing of knowledge is what patients need.
‘Our patients do not want to provide several professionals with the same information, so this is about fewer handovers,’ she says.
‘It’s not the case that the physio goes in and does the mobility checks, sees they have the right walking aid, and then says “now we need to hand you over to the OT who will look at what equipment you need for home”.
‘That is how things used to work – and probably still do work – in a lot of places around the country. Whereas here, we’ll see the patient throughout because we all hold those skills and so the patient only has to see one therapist.’
But surely physiotherapy, occupational therapy and nursing are different disciplines? According to Ms Bryan the tasks delivered by one particular profession are ‘really very few and far between’.
‘An example would be if someone needed significant chest physiotherapy and so we would always request advice in the first instance, or we would seek that the physio sees the patient,’ says the OT.
‘Obviously, if patients ask us very specific questions about their medication that we don’t feel able to answer, then we divert those questions to the nurses or even the pharmacists, because we have pharmacists on the unit all the time too.’

The transfer of skills is made formally and informally, often through joint working, says Ms Collins, adding that there is a strong wish by individual health professionals – not just therapists and nurses, but consultants and pharmacists too – to teach others.
‘We have to recognise that the population of older people who come into hospital has changed radically over the last five to 10 years,’ she says. ‘Typically they have very complex needs and it doesn’t suit them to have one person seeing this bit of them and someone else seeing a different bit.’
In another departure from tradition, RACE operates seven days a week. Both therapists think that offering a ‘seamless’ service, so that patients do not wait from a Friday to a Monday morning for treatment, helps to foster prompt discharge.
The unit’s national prize was awarded at an NHS Improving Quality event, which focused on delivering seven-day services. Delegates heard from patient representative Rodney Partington who said that every patient should have the best chance of recovery, no matter what time of the day or day of the week it is.
Are there barriers, though, to getting staff in at weekends? Ms Collins says seven-day working is now the norm and the unit’s therapists appreciate they are vital to getting patients home again. Therapists work either a Saturday or a Sunday and have an extra day off during the week. Then there are pay enhancements: 40 per cent for working on a Saturday and more – 60 per cent – for a Sunday.
‘This team has been working seven days a week since 2010 and there has never been any quibble about that. And our team has always aimed for high quality, to suit the patients, rather than to suit us,’ says Ms Collins.
So far so good. But there seems to be one blot on this landscape of success. In June 2009 the trust-wide readmission rate for older patients 28 days after discharge was 12 per cent. But for the RACE unit in June 2011 – a year after it opened – it had risen to 16 per cent.

Patients ‘want to be at home’

A trust spokesperson told Frontline that the figure reflects a period when the service was ‘bedding in’ and that the readmission rate for the unit is ‘now steady at about 15 per cent’.
Matt Thomas, clinical director for medicine at the trust, says: ‘There’s a balance between achieving an appropriate discharge rate and accepting longer length of stay, which can be detrimental in itself to older people. We continue to strive to achieve the discharge rate that we think our patients want and as low a readmission rate as possible.’
Ms Collins acknowledges that the patients discharged by RACE are at high risk of readmission, but says the alternative is for them to remain in hospital for longer. And staff have a firm belief that their patients want to be at home.
She adds: ‘The 28-day readmission for complex older people often includes new medical problems that are unrelated to their initial admission. More indicative of the efficacy of therapy is the seven-day admission rate. For the RACE unit this is just below seven per cent and on longer-stay older people’s ward it’s five per cent.’
Sir Bruce Keogh says the NHS is on the cusp of a revolution in innovation. At its heart, he believes, innovation is the will to better. This means finding solutions for existing needs or new problems through more effective products, processes, technology or the way services are delivered.
The RACE unit seems to have that will. ‘The thing that’s very, very different about our team is that we were thrown a challenge when they opened this unit and we have always worked with a view that what we want to provide is the best for our patients,’ Ms Collins says.