A physio is playing a central role in a multidisciplinary team with a remit to cut the number of frail older patients who are admitted to a Portsmouth hospital, as Andrew Cole discovered. 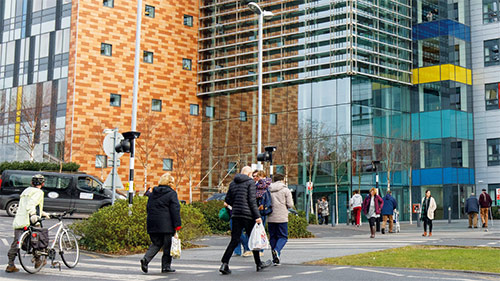 This winter the media has been full of stories of ever-growing queues at A&E and hospital beds full to overflowing. One hospital that appears to be bucking this trend is Queen Alexandra Hospital, Portsmouth – thanks in part to its new Frailty Interface Team (FIT). This is a 12-strong integrated team of therapists, nurses, social workers and care assistants who operate in the busy hospital’s A&E and acute medical unit departments with the central aim of keeping as many frail older patients as possible out of hospital and in their own home.

The service launched last June and already in its first six months it has saved more than £1 million by cutting admissions to hospital wards and supporting many patients to be discharged either to their home or a community hospital. 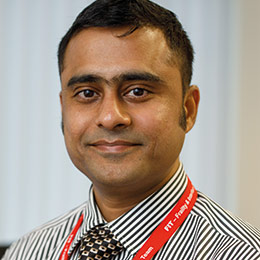 Mugundhan Thottiam (right), who is clinical team manager for urgent care and professional lead for physiotherapy services, has no doubt this is the way forward. He points out that patients over the age of 70 spend an average of 10 days in a hospital bed for each admission and this can seriously affect patient flow both at the front door and upon discharge to the community.

It is also has an adverse effect on the patients themselves. ‘Having patients in hospital increases their frailty and leads to sarcopenia or diffused muscle atrophy which means their functional level is likely to have deteriorated by the time they leave.’ The key aims of the service are to ensure that patients who are categorised as frail and older stay out of hospital if they are medically fit while at the same time reducing the lengths of stay in the acute medical unit. ‘We will then work very closely with our community partners to ensure they are discharged quickly and effectively.’

The service started 18 months ago and achieved some notable successes. But at that point it consisted of three separate teams who were also working with two different social work teams. This resulted in a lot of duplication, which led to increased patient journey time.

Under the new arrangements physios, occupational therapists (OTs), nurses and social workers are part of one integrated team, all working together to first identify appropriate patients for the service and then ensure a single streamlined journey. ‘It’s significantly reduced the paperwork and really decreased the time involved for each patient,’ says Mr Thottiam.

Having two dedicated social workers in the team has also made a ‘huge difference’ and has dramatically speeded up discharges. “It’s really helped in getting patients’ care needs and support packages identified at an early stage.’ FIT differs from many other frailty models in combining therapists, nurses and social workers in the one team. Its success was recently recognised by NHS Elect, the training and support  arm of the health service, when it received an award for the best patient experience site.

So how does it work? The team serves both the A&E and acute medical unit departments in the hospital. All patients aged 65 or older coming from care homes and all over 75 coming from their own home will first be assessed to see if they meet the team’s frailty criteria. If they do they will be asked to complete a geriatric assessment form to determine their level of frailty. The team aims to see all these patients within two hours and to arrange a supported discharge, where appropriate, within two days.

Staff also regularly update their patients’ progress on a journey board, which keeps everyone up to date with what is happening to different patients. The team works closely with its community partners to facilitate discharge through one of three principal pathways:

Freda (not her real name) was admitted to A&E last December after falling at home. She was triaged and seen by the FIT team within an hour. The FIT nurses then carried out a comprehensive geriatric assessment on Freda. This identified a urinary tract infection and lowered blood pressure as a result of which she was prescribed antibiotics and intravenous fluids.

The physio and OT also carried out a full physical examination and mobility assessment. Freda was given an extra Zimmer frame for upstairs, a bed lever and a kitchen trolley – all of which were delivered on the same day. In addition, the team’s social workers arranged for Freda to receive meals on wheels and an extra night time call. Within three hours she had been discharged. Before the FIT service this whole procedure would have taken at least 24 hours.

Physiotherapy plays a vital role in ensuring patients are ready for discharge, says Mr Thottiam. Physios can not only identify patients’ physical and functional abilities and so set up rehab programmes when they are discharged, they can also detect when physical problems may be masking something else entirely.

He mentions an older man admitted to hospital because he had found himself unable to get out of his chair.  A full examination showed he was actually very fit for his age, and that the problem lay elsewhere. He was sent for blood and urine tests which identified an underlying condition that had probably triggered the crisis.

The team has chalked up impressive results in its first few months. Since June, for example, it has screened more than 12,000 patients in A&E for frailty with more than 4,000 meeting the team’s criteria for further support. From September to November 2016 both supported discharges and the number of avoided admissions rose significantly compared to the same period last year. Supported discharges, for instance, went up from 461 to 575 and avoided admissions from 248 to 359. This has in turn led to a reduction in overall hospital admissions.

Mr Thottiam attends a weekly meeting with general managers and IT staff to assess the latest results and to make adjustments where necessary. ‘If they come back saying they’re not happy then we would need to make changes. But I’m glad to say that hasn’t happened yet.’

The FIT service is clearly held in high regard at the trust. At an event last December to mark the first anniversary of the service and the opening of a new office, chief operating officer Ed Donald said: ‘FIT has only been going for a little time, but together you have persuaded the trust and others that this is the right thing for patients. It’s clear from the statistics that your work is having a huge impact on our frail patients, and it has enhanced our hospital immensely.’

Sarah Eggleton, general manager for medicine for older people, rehabilitation and stroke services, said: ‘FIT is a collaborative initiative, with our community partners, and is a model of best practice nationally, delivering multidisciplinary specialist assessment and intervention at the front door, to ensure the early identification of frail patients and, where possible, admission avoidance.’

The team still faces a number of challenges, however. There have been staff shortages, for example. There is also the fact that while the hospital team is now integrated, it still has to liaise with community teams from different patches with different systems. In addition, the funding for the service comes from three trusts and two county councils, all of whom have to be kept constantly updated.

Despite his elevated role Mr Thottiam, who joined the team when it relaunched in June, is still able to practise hands-on physiotherapy. Recently he stepped in because of a shortage of band 6 physios.

If he hadn’t, he says simply, people’s discharges would have been delayed. Working at the sharp end is always rewarding, he says. ‘There’s so much pleasure in seeing a patient smile because of what you’ve done. That’s part of my role that gives me big satisfaction. You can change a patient’s life and that’s a blessing.’ fl

‘They weren’t like nurses, they were more like friends,’ said one. ‘It’s nice to know that there’s someone there all the time,’ said another. And one patient was full of praise for the social worker – ‘she seemed to be making things happen,’ she said.

Many commented on the rushed nature of early transactions and the shortage of hard information about what was wrong with them and what the plans were.

‘I was moved around when I first came in but I didn’t find it upsetting as I expected it and it was an assessment area,’ said one patient.

Others emphasised how anxious they were when they first arrived.  One patient said this was her first experience of hospital. ‘I didn’t know anything and it was a bit worrying. Things were happening and I didn’t know what it was.’