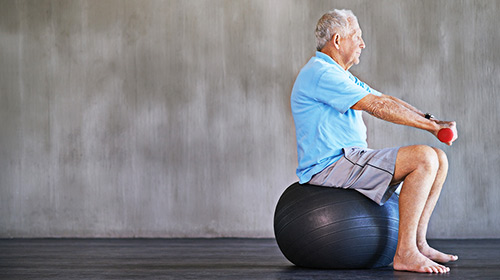 Repeatedly practising functional tasks, otherwise known as repetitive task training, or RTT for short, may be marginally more helpful than standard physiotherapy, to aid recovery of movement after a stroke, concludes a systematic review of the available evidence.

But the overall quality of the research data is not very high, the authors caution.

To find out whether different types of practice and/or the time spent on them, might affect how well RTT works, the authors reviewed 33 relevant studies, published from 2006 up to June 2016, and involving 1,853 participants doing a wide range of different tasks.

These included lifting a ball, walking, standing up from sitting, and circuit training.  Time spent training varied from 10 to more than 40 hours, spread over periods ranging from two to 20 weeks.

The overall quality of the evidence for arm, hand, and leg function was low, while that for walking distance and measures of walking ability was moderate, according to the Grades of Recommendation, Assessment, Development and Evaluation (GRADE) criteria.  Furthermore, study details were often incomplete, results were inconsistent across studies, and some comparisons included only a few participants.

But the pooled data showed that compared with those given standard physiotherapy or dummy treatment (placebo), people who repeatedly practised functional tasks showed small improvements in arm and hand function, walking distance, and in measures of walking ability. Improvements in arm and leg function were maintained up to six months later.  But there wasn’t enough evidence to quantify the risk of potential unwanted effects, such as falls.  French B et al.  Repetitive task training for improving functional ability after stroke. Cochrane Database of Systematic Reviews (Stroke Group) - open access.

Why is this review important?
The authors highlight that in the acute stage of stroke approximately half of all survivors are left with severe functional problems (Lawrence, 2001).  In this review they consider whether RTT alone can improve the ability to carry out routine activities of daily living, and include 19 new studies in their analysis.

What are the implications for research and physiotherapy practice?
NIHR clinical lecturer and research physiotherapist Dr Sarah Moore of the Stroke Research Group at Newcastle University says ‘this review suggests significant benefit for the use of RTT to improve arm and leg function.  As therapists we should continue to focus on the repetition of arm and leg functional daily tasks for stroke rehabilitation.

‘Interestingly, previous studies have indicated that higher training intensity (eg > 20 hours) is more effective, but the current study showed that dose, type of intervention, or the time spent on it made little difference.  Further research is needed to find out the optimal number of repetitions to include within sessions and whether this affects the outcome.  Better quality studies with larger sample sizes would give clinicians clearer guidance on the elements of RTT that lead to improved outcome.’

Despite current guidance that all health and social care professionals should promote physical activity in routine clinical practice, the evidence for physiotherapists on how best to do that is ‘sparse and disparate’.

That’s the conclusion of a scoping review of relevant research published over the past decade.

The authors from Sheffield Hallam and Keele universities base their findings on a search of key research databases, which returned 31 studies relating to physiotherapy practice, published between 2005 and 2015.

The number of studies published annually rose sharply during this period, which the authors describe as ‘encouraging’.

But only one study came from the UK; most came from Ireland and the USA.  And the bulk of the research focused on perceptions, attitudes, and barriers rather than on potential interventions.

Involving physiotherapists in more systems-based approaches, such as promoting healthy environments and workforces, could boost their impact on driving down physical inactivity levels, suggest the authors.

‘The predominance of scoping studies and the clear social, economic, and political drivers for change in this area highlight a need for more pragmatic interventional studies that can inform clinical practice,’ they conclude. Lowe A et al.  Physical activity promotion in physiotherapy practice: a systematic scoping review of a decade of literature. British Journal of Sports Medicine.