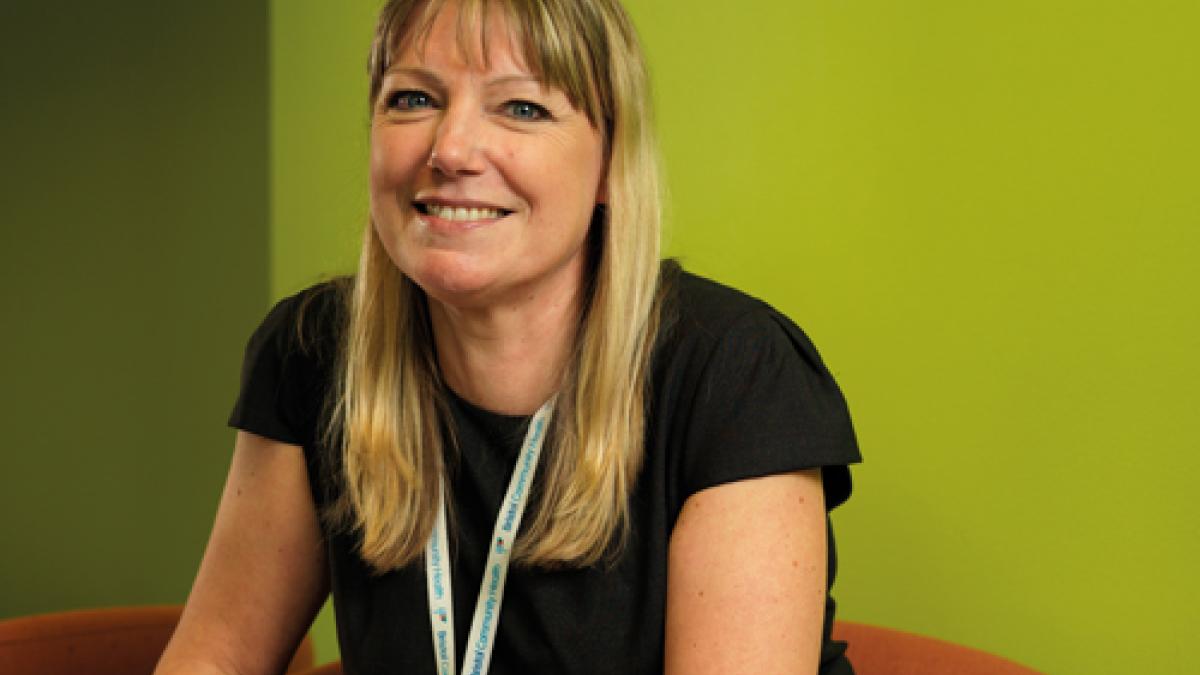 Claire Madsen has practised physiotherapy in continental Europe, educated the public about HIV and Aids when the diseases dominated headlines, and helped establish successful health services across Bristol. The diverse nature of her career proved to be the perfect preparation for her current role as deputy clinical director of Bristol Community Health Trust.
And her rise to the rare position of being a deputy clinical director with neither a medical nor a nursing background, helped land her the CSP’s 2015 demonstrating leadership award. Ms Madsen’s route to her current post began began when her trust’s medical director, Dr Mark Kingston (now retired), decided he wanted non-medical deputies.
Most of the community trust’s clinicians are therapists and nurses, not doctors, so the decision seemed logical. ‘Mark appointed me as his allied health professional (AHP) lead and then I was appointed as the deputy to the clinical director (who has a nursing background) when Mark left and the structure was changed.’
Ms Madsen’s physiotherapy career began after she qualified from what was then Sheffield Polytechnic in1988, before returning to her home city of Bristol to complete her junior rotations in the NHS.
After specialising in neurological physiotherapy and securing a senior post at Frenchay Hospital in Bristol, Ms Masden moved to Luxembourg in 1992 due to her husband’s job. From there they moved to Belgium, where complications in accrediting qualifications led to her broaden her professional horizons.

Ms Madsen’s first job in Belgium was working as an education officer for an HIV/Aids charity, just at the time when all aspects of the disease, were hitting the headlines.
Quite apart from working outside physiotherapy for the first time, the experience gained from operating in such a high-profile area was, she says, priceless. After moving back to UK, Ms Madsen worked for a year at a private hospital in Bristol – once again gaining experience of a different sector – before moving into the community, starting as specialist neuro physio and then being appointed superintendent of her community physio service.
It was in this job that Ms Madsen was given further opportunities to branch out, via two secondments. The first was to establish the Bristol pulmonary rehabilitation service, which has just celebrated its tenth anniversary. It began with 2.2 staff and is now treating more than 600 patients a year and running all oxygen services in Bristol. The second was to set up a musculoskeletal assessment and triage service (MATS) and spinal service for Bristol.
‘I learnt from there how important as a physio it is to branch out from physiotherapy and get the opportunity to manage a multidisciplinary team,’ she says. ‘These included nurses and therapists in the respiratory team. In the MSK team it was physios, podiatrists and doctors. As physios I think we are really bad at seeing our transferrable skills. Physios are very, very good at respiratory care, but traditionally, respiratory services are staffed by respiratory nurses and I think it is about challenging traditions.’

Ms Madsen sits on the consultants group at CSP, which aims to tackle barriers to healthcare roles and encourage members to move into leadership positions.
‘The other thing, which I have done over the years with my staff, is about challenging job descriptions,’ she says. ‘You should ask why a nurse is doing a particular job. Things like a community matron post: why should they be nurses’ posts, because therapists often have the skills to do that job?
‘As physios our character is such that we feel we have to be really, really good at something before we can do it and sometimes you have to put yourself in a position when you probably don’t know that much about something, but you are leading it.
So it is about thinking that you’ve got the leadership skills and you’ve got the knowledge, so you just need to learn a bit more about nursing or the other professions you are managing. It is very normal for a director of nursing to manage therapists, but it is not normal for a therapist to be a director of nursing.’
Once in her deputy clinical director post, Ms Madsen’s biggest challenge was convincing her non-therapist colleagues of her ability to do the job.‘I had to be accepted and recognised by nurses because they make up the majority of the workforce in our trust,’ she says.
‘Our clinical director, Aileen Fraser, is a nurse and she is very supportive. We decided not to work along profession lines, so I don’t manage only AHPs and Aileen doesn’t’ manage just nurses. The split is that I manage acute care and she manages long-term condition care so we are not differentiated by profession.’
Now, she has been completely accepted in her role. Ms Madsen’s chief executive was her ‘hardest win’, she admits, but she was one of the nominees for her CSP award.
‘I go to commissioning meetings now and I don’t think they remember that I am a physiotherapist any more,’ Ms Madsen says. ‘It’s just not an issue any more, it is about proving you can do the job when you get in there and then people forget what your profession is.’
Ms Madsen is Care Quality Commission (CQC) named person or ‘nominated individual’ for the trust and also works as a CQC inspector. She also sits on the board of the West of England Academic Health Science Network, enabling her to involve ther trust in all innovations led by the network.

Leadership skills are generic and transferrable, and physios need to have greater belief in their skills. Physiotherapists are well trained and qualified, and physiotherapy as a profession is becoming more confident, Ms Madsen believes. Then it is just a question of putting those abilities to greater use.
For Ms Madsen now, her goal is to become as a clinical director and look at what professional development she needs to make that step up. A chief executive post is not currently in her sights, partly because she still works as a clinician part-time and she would be reluctant to relinquish that.
‘At the moment I have a very bizarre portfolio. I line manage patient and public involvement service, complaints, the legal team, the risk manager,’ she says. ‘It is all really connected to patient care, so it keeps me very close to frontline patient care and I think I would really miss that.
‘I have had traditional operational management roles in the past and I have felt distanced from the patients when I have done that, which is probably one of the reasons why I have come back to this role, because what I really care about is patient care and the quality that we offer and this role allows me to do that.’

Ms Madsen’s advice for other physiotherapists considering a move into management is to look outside traditional roles.
‘There are lots of opportunities but they are not always necessarily in pure physiotherapy roles,’ she says.
‘The more experience of managing multidisciplinary teams you have, the better, because then you have a much broader understanding of healthcare, so any opportunities that you can take to do that are really important.
‘Challenge traditional roles, and ask: “Could I do that role, and if that is something I want to do then why shouldn’t I do it?”’
And Ms Madsen adds: ‘Throughout my career I have been lucky to work with people who have inspired me and managers who have encouraged and supported me to take chances and opportunities.’