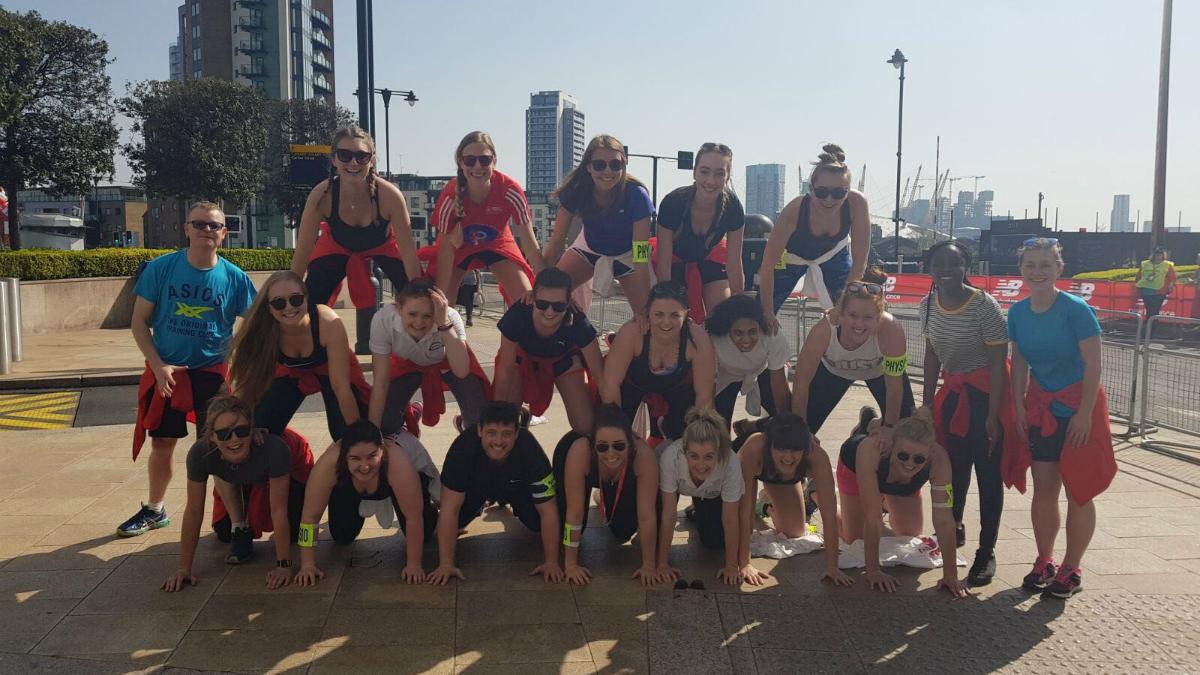 A total of 205 physiotherapists and students worked alongside St John Ambulance, podiatrists and doctors along the 26.2 mile route and at the finish area. Others volunteered for specific teams of runners raising funds for charities like the MS Society (see below).

Rory Brown, head physiotherapist at the finish line, said: 'It was a busier day due to the weather but we were much appreciated by the runners.

'Due to the heat physios were also able to draw on their cardio-respiratory skills and experience and not just their musculoskeletal knowledge in order to help manage and care for finishers.' 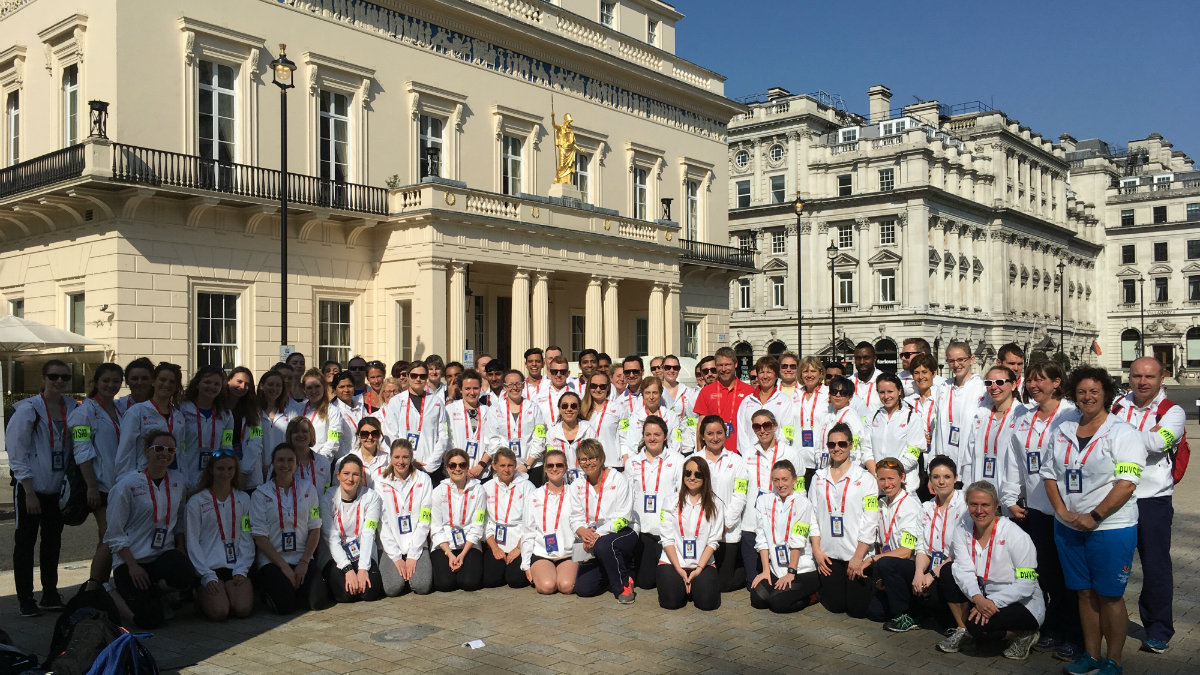 Some of the 75 finish line physio volunteers

Overall physio contact numbers were up about 20 per cent to around 1,400 this year, Mr Brown told Frontline.

'There was a marked rise in cramp in the main medical tents and also a lot more physio input and support with more medical issues. This tended to be focused in a couple of the medical tents rather than throughout. Runners were also finishing later and there was a need for physio support until mid evening.'

Abbi Taylor and Debra Silver were the lead physiotherapists for the course of the marathon.

They had 65 physios and 65 students based on 15 stations covering 10 miles of the route.

'All stations reported that they were extremely busy,' said Ms Taylor.

'Our stations were treating the usual cramps and muscular injuries but many of our physiotherapists were treating more unwell people who were struggling with the heat, supported by St John's and the doctors.' 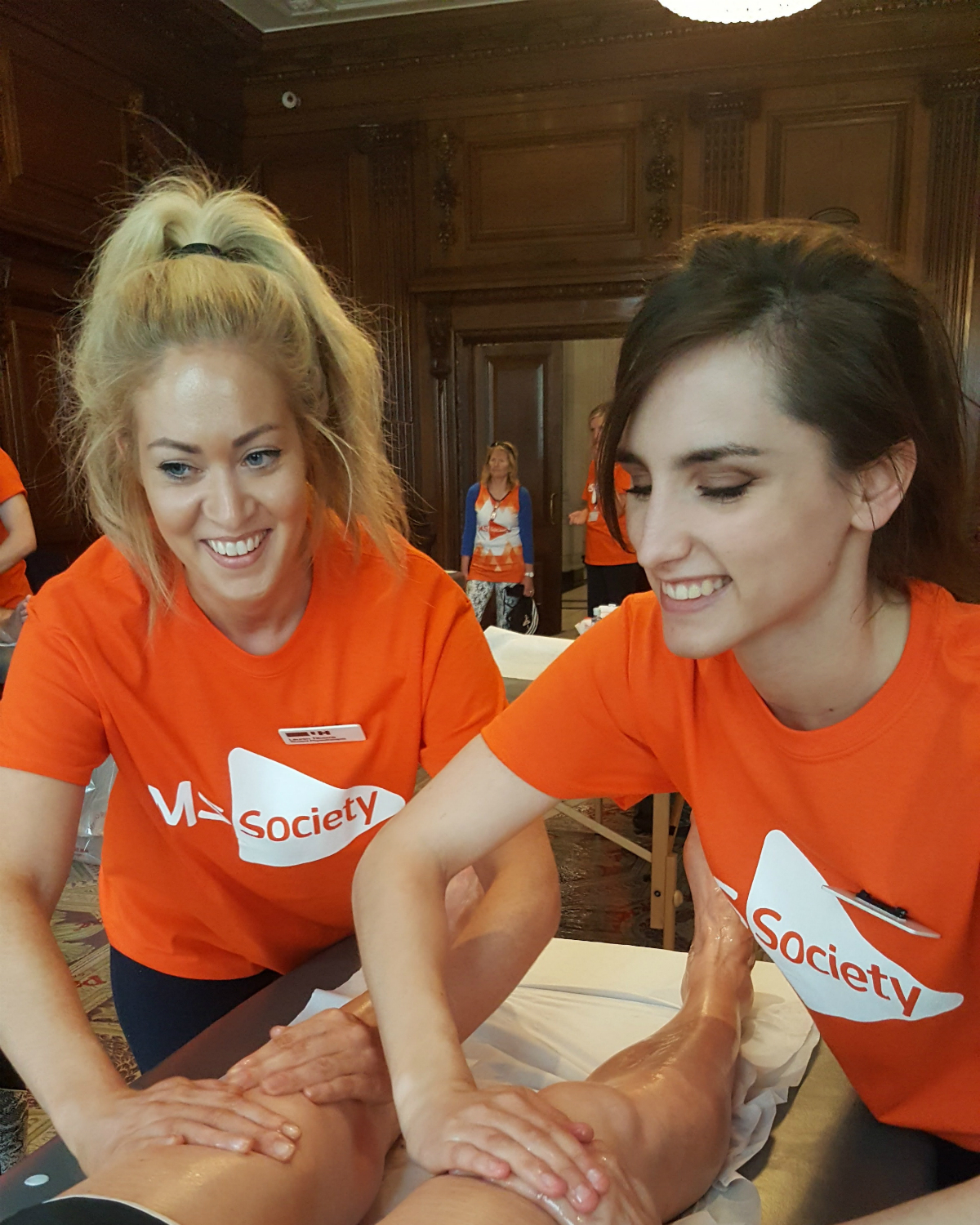 A total of 174 physiotherapy staff (127 women and 47 men) registered to take part as athletes.

A group of 30 second and third year physiotherapy students, assisted by staff from the University of Hertfordshire, was on hand delivering post-event massages to the 300 runners raising
funds for the Multiple Sclerosis (MS) Society.

Pictured, right, are students Lauren Titcomb (left) and Sophie Collins (right) with one of the marathon runners.

Karen Atkinson, professional lead for the physiotherapy programme, said: 'For our students it is a really valuable experience providing an opportunity to contextualize their practice; supporting the athletes at this event facilitates the development of problem solving skills needed to become competent professional physiotherapists.’

She said one runner commented: 'I was a broken man, but the students have glued me back together!'

University of East London students continued with their yearly tradition of triaging on the finish line,
under the supervision of senior physiotherapists. 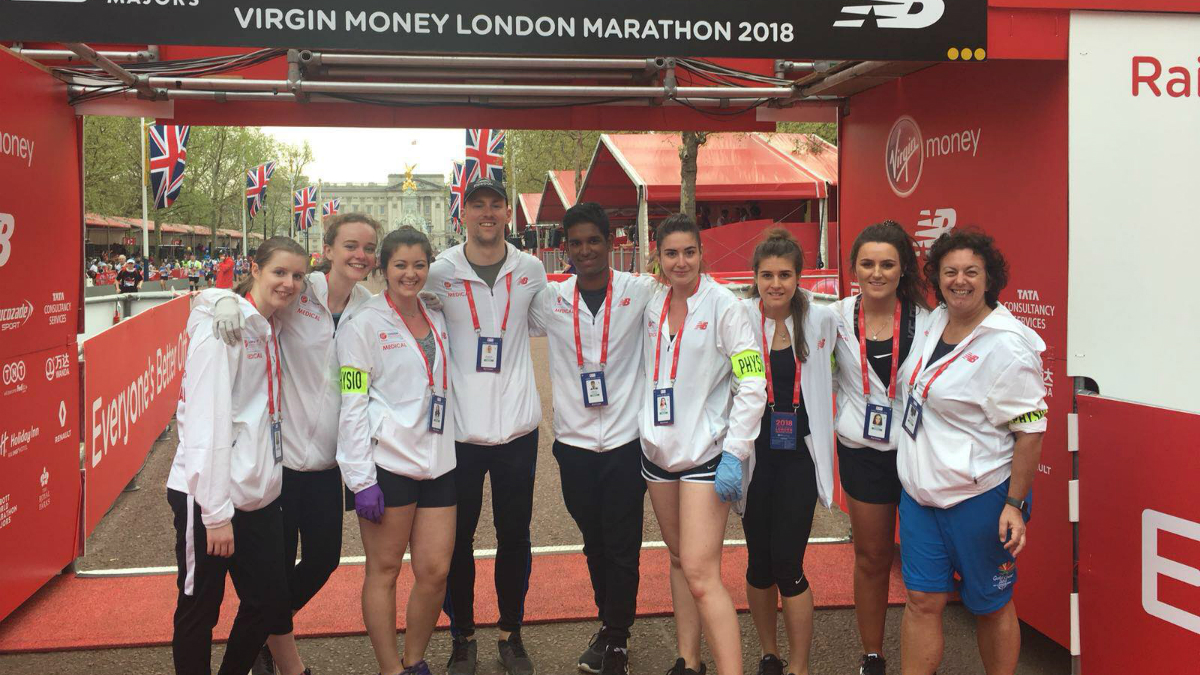 'By working alongside the St John’s Ambulance paramedics and other medical disciplines we were able to treat physiotherapy-related conditions such as cramps and muscle strains while facilitating the care of runners requiring more urgent medical help,' said student Rebecca Robinson.