Two physiotherapists have won a care and quality award from their trust, after being nominated by an amputee patient they helped to rehabilitate. 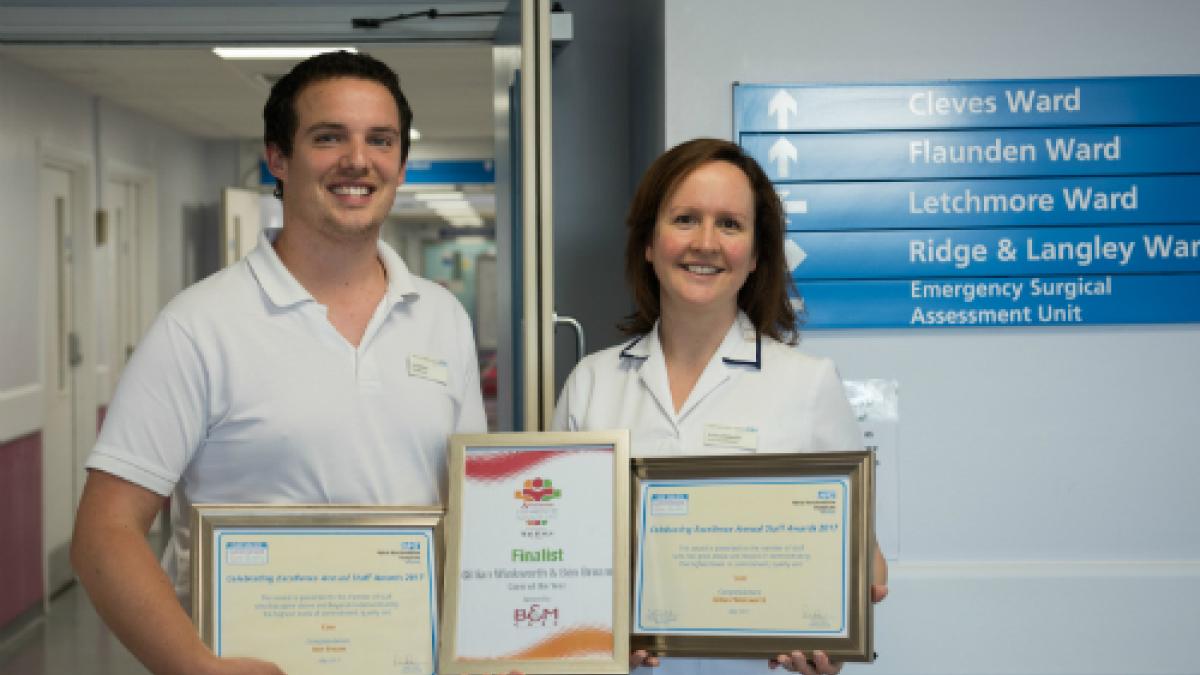 Physiotherapists Ben Bream and Gillian Winkworth with their award

Elizabeth Langton, who had a leg amputated due to a blood clot, nominated the physios after being rehabilitated by the pair at Watford General Hospital.

Ms Langton was an inpatient at the hospital for 17 days in September 2016. Ms Winkworth saw her on a Sunday, the day after her operation, discussed amputee rehabilitation and carried out an assessment for Ms Langton’s transfer from the intensive treatment unit to a ward.

‘Our job is to see patients who have had an amputation as soon as possible following surgery,’ said Ms Winkworth.

‘Due to seven-day working at the trust, this means we can see patients even on a weekend, as was the case with Liz.’

Ms Winkworth said she and Mr Bream were both really touched by the nomination, and that it was great for the inpatient therapy department to get this recognition.

‘To win the annual award is extra special, as there were a lot of lovely nominations and lovely stories of our hard working, caring colleagues,’ she said.

Both physios provided Ms Langton with physical therapy and psycho-social support while she was on the ward. And within two weeks of her operation she was discharged home, with a temporary wheelchair, and referrals for an outpatient class, a permanent wheelchair and a prosthetic limb.

Mr Bream said: ‘Liz was motivated and keen to learn new techniques and liked to be challenged, which challenged us as therapists too.

‘This meant that she could be discharged straight home rather than to intermediate care. Once home, Liz was able to attend the outpatient clinic run by Gillian and me, to prepare her for the provision of a prosthetic leg.

‘She is one of the most positive people I have ever met and her enthusiasm rubbed off on the other amputee patients.’

In her nomination, Ms Langton said: ‘Without the support of Gillian and Ben, my recuperation and recovery would have been long and difficult.

‘I really want to take this opportunity to thank them, and the whole of the physiotherapy department.

‘They are often overlooked, and have given me drive, determination, positivity, and more importantly, a good outlook for the future. Thank you just does not say enough.’