Ticket to ride: how hippotherapy can help disabled children

Gill Hitchcock meets children with disabilities in north Wales who benefit from a therapy despite any formal research to show it works. 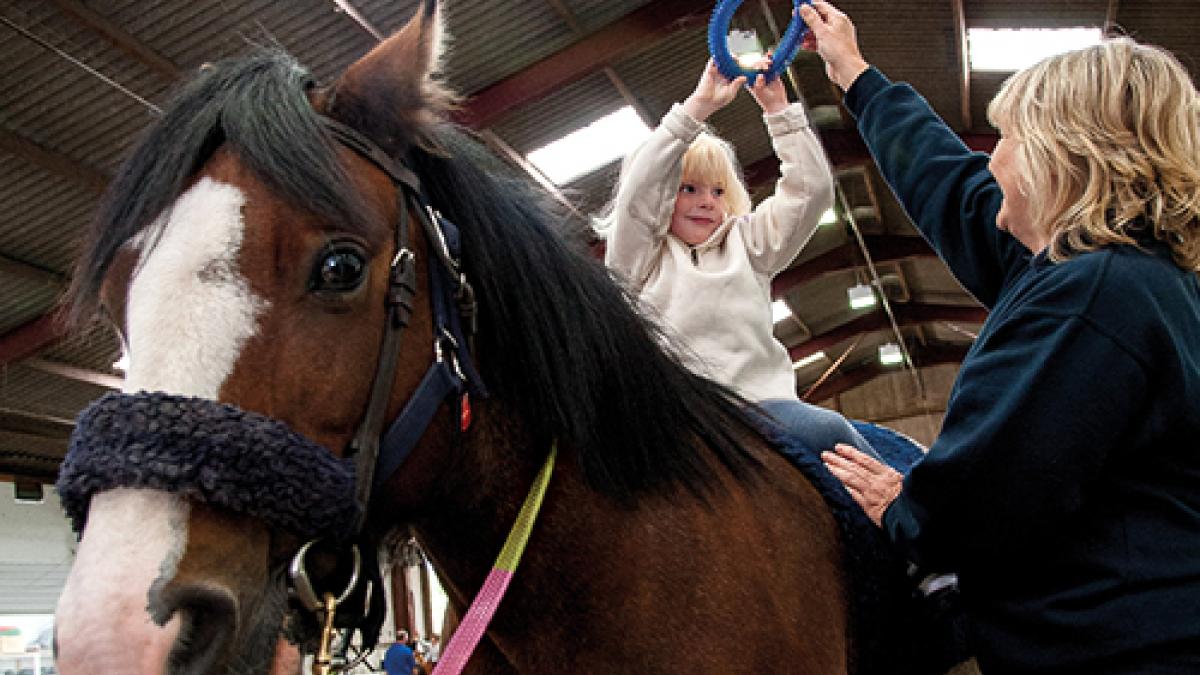 It’s often the unexpected that gets us. For Abbie Roberts it was a small incident in a school playground when she was just 11. She had picked up a younger child and hurt her arm, an event which led to crippling pain and serious disability. It had triggered complex pain syndrome and as Abbie explains: ‘I was in a wheelchair, unable to sit up unaided or do anything for myself, not even simple tasks.’
Three years on and Abbie is not only walking again, but taking part in national championships at Hartpury College, an equine centre in Gloucestershire, where she came third in a dressage competition. Horse riding is part of life for the 14 year old and, here’s the most amazing thing, the animals played a key role in her remarkable recovery.
Frontline meets Abbie at the Clwyd Special Riding Centre. It’s a charity run by volunteers which nestles below Hope Mountain in the rural north Wales village of Llanfynydd. Abbie started coming here two years ago for weekly hippotherapy sessions led by one of a small number of physios in the UK who practise this treatment, Lynne Munro.
Abbie’s mum Pattie Roberts says: ‘When we look back now at what made a difference, it was the hippotherapy. With the movement of the horses there were small improvements and she’s loved to come here.’
So how does hippotherapy work? In essence the gait of the horse influences the rider, who typically sits on its back without a saddle. As the animal walks, the rider experiences movements of the pelvis which are translated along the spine, affecting their hip joints and legs. The rider’s hip and legs are stretched by the rotundity of the horse and its warmth increases circulation.
‘The shape of the horse and the way that we can use its movement qualities offer a fantastic sensory motor experience for the patient,’ says Ms Munro.
‘As the horse picks up a hind leg and takes a step it makes the person move their centre of gravity out a little bit, and the other leg comes back in and picks up them back up again. So it enables the person to learn how to centre and balance on a moving base.’

Children and adults can benefit

As with all therapies, hippotherapy doesn’t suit everyone. But it can be helpful to those who have experienced an injury or a stroke, or with cerebral palsy, multiple sclerosis, delays in development, or even Down syndrome and autism spectrum disorders.
‘Hippotherapy is quite often seen as a paediatric activity, because the size of the children makes it more possible to do these moving around, turn around positions. But I think it’s of equal benefit for children and adults, in different forms,’ Ms Munro says.
It’s easy to see why horses were not part of Ms Munro’s earlier life. She grew up in an urban environment and qualified as a physio in the London’s East End. But in the 1980s she worked in Scotland at a centre for adults with learning disabilities, a stint that included taking people horse riding. ‘I could see the benefits this could bring,’ she says. ‘At that time we had three-part training in hippotherapy. Part one was here in north Wales, so I got in my little red Mini and drove all the way there. After that I was hooked.’

Ms Munro has practised hippotherapy one day a week at Llanfynydd for four years, and also runs sessions over the border in Shropshire. This morning four-year-old Isabelle Wynne is having her final session in the indoor arena, before she moves on to riding lessons at a centre for non-disabled people. Her mother Rebecca Wynne says Isabelle developed a brain tumour at two years. Surgery damaged the nerves on the right side of Isabelle’s body, leaving her with hemiplegia.
‘I’ve never been around horses, so to see the benefit of coming here is just amazing. She has improved so much,’ says Ms Wynne. ‘Her balance has improved. Her core strength has improved. Her confidence has improved. Her communication with other people has improved – it’s more than simply the physical side. And Issie absolutely loves it.’
The parents of other children make equally powerful arguments about the benefits of hippotherapy. ‘I noticed Elan’s strength improve within four to six weeks after hippotherapy and her core strength now is unbelievable,’ says Ceris Williams about her six-year-old daughter.
While Elan is enjoying her ride, Ms Williams explains that her child has quadriplegic cerebral palsy and that she brought her to the centre to see if she could be stimulated and strengthen in any way. According to Ms Williams, hippotherapy has aided Elan physically and – because she wanted to be able to tell the horses to ‘walk on’ – with her speech and confidence.
‘And the best thing is that she is getting physio and not knowing that this is happening,’ Ms Williams says. ‘Elan can be strong-willed and she didn’t always take to physiotherapy, because it can be a bit intrusive at that age.’
Sylvia Williams has brought her five-year-old granddaughter Amelia Scott-Melville, who was born at 25 weeks weighing less than 2lb and has multiple sclerosis. Hippotherapy is all about team working, as well as safety. Ms Munro is directing as three trained horse handlers, one at the reins and two on either side, walk Amelia around the soft-surfaced arena. Helmets are an option, but not used if they  would impede the child’s ability to benefit from this therapy.
All the horses are aged more than five years, have what Ms Munro describes as ‘some life experience’ and been through training and probation by the centre’s staff. ‘Not all horses are suitable,’ says Ms Munro. ‘They have to be able to accept a leader and two side walkers and some horses find that difficult.’

Next up is Jack Porter. His mother, Bethan Porter, says her two-year-old has taken a little while to get used to hippotherapy. In the first couple of weeks he cried all the way around the arena. Jack has diplegia and cerebral palsy and hippotherapy was recommended for him by the Riding for the Disabled Association. Despite Jack’s difficulties, Ms Porter believes the sessions are improving her son’s core strength, along with his speech and social interaction.
The positivity of these testimonies is undeniable, but there is little hard evidence about the benefits of hippotherapy, even though it’s nothing new. After all, it dates back to ancient Greece. One report, in the Physical Therapy Journal, concludes that hippotherapy merely ‘appears’ to be a viable treatment for improving balance and function in children with mild to moderate balance problems.
‘One of the obstacles is randomised control trials,’ says Ms Munro. ‘When you’re working in hippotherapy you can have a case study, but then you are looking at that person’s progress, rather than having a whole bunch of people.

The biggest challenge in running her hippotherapy practice, she says, is getting recognised by the NHS. In Germany and Finland it’s a prescribed treatment but, to be fair to NHS leaders, hippotherapy does not come cheap and they need evidence before stumping up scarce public funds.
There’s another challenge too: the UK has fewer than 30 trained therapists. ‘The more people we can have trained and out there working, the more likely it is that things will take off,’ says Ms Munro.
On the training front, things are looking up. This year Robert Gordon University and the Association of Chartered Therapists in Therapeutic Riding announced they were working together to deliver two accredited postgraduate modules for  physiotherapists and occupational therapists. The modules – hippotherapy and equine assessment – will be available in Aberdeen. This opens a training route for physios beyond the existing course delivered in north Wales.
It’s nearly lunchtime and Oliver Pemberton is ready to mount. He’s enthusiastic and Susan Pemberton says hippotherapy is helping her son, who is four and has mild cerebral palsy, by improving his flexibility, strength and confidence. ‘Oliver might find it harder to play football with his peers, whereas here he feels like he’s on a level playing field. And it doesn’t feel like physio.’