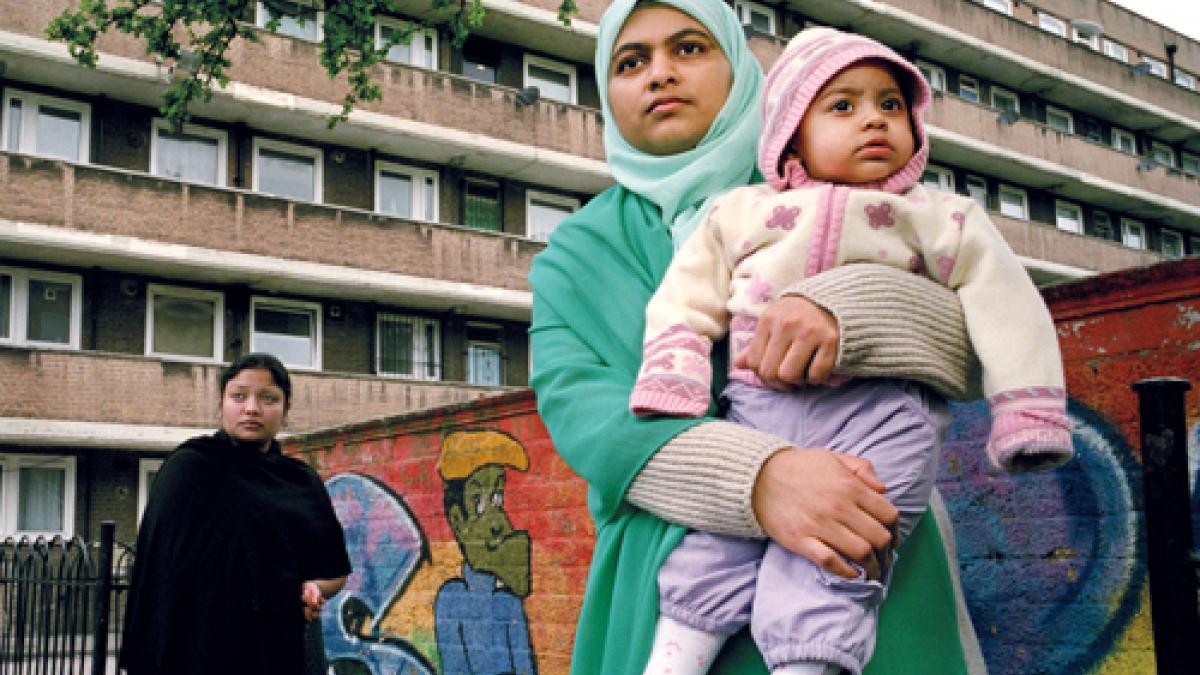 Jan Hura Begum with her eight-month-old baby Nazha. They live in a London borough with relatively high levels of conditions such as TB, asthma and diabetes. There is no suggestion that anyone in the photograph is affected.  Photo: Tom Stoddart/Getty

Many people think of tuberculosis (TB) as a Dickensian era condition. But current figures from the World Health Organization (WHO) show that, alongside HIV, TB is the most deadly infectious disease in the world.
Most new cases occur in China, India, Indonesia, Nigeria and Pakistan. But England has the highest rates of TB in western Europe, according to figures from Public Health England, with 12 cases in every 100,000 people.
And the numbers in London are even higher. Last November, a London Assembly report said rates of TB in parts of London were worse than Iraq, Eritrea and Rwanda.

In addition, the report found one London borough in three exceeds the WHO ‘high incidence’ threshold, with more than 40 cases of TB in every 100,000 people. The most affected areas of London, including Hounslow, Brent, Harrow, Newham and Ealing, have TB rates of more than 150 per 100,000 people.

She explains that the hospital’s clinical infection unit is a tertiary referral centre for the clinical diagnosis and management of adults with TB, as well as the management of complex cases of multi-drug resistant TB (MDR TB).

The unit receives TB referrals from across south east England and local district general hospitals. The trust’s physiotherapy TB provision consists of a band 5 physio who works half a day on the unit, and receives input from the respiratory team and the trust’s neuro-outreach physiotherapy team.

‘We don’t have a blanket referral for all patients who are admitted with TB, but we are lucky to work with fantastic nurses and doctors who are able to identify when patients need our input,’ says Ms Ricketts.

There is no typical pathway of care for TB patients who are referred to the unit, she says, as each case is different and physiotherapy treatment – when needed – varies depending on the presentation and site of TB in a patient’s body.

Most cases of TB can be successfully treated with a six-month course of antibiotics, says Mrs Ricketts. But drug-resistant strains of the disease can involve lengthier and more complex treatment, with antibiotics and injectable drugs, and often require inpatient care.

Physiotherapy may be needed if a patient with TB has a high secretion load, respiratory compromise or functional or neurological impairment. ‘TB can affect different parts of the body – it can be in your bladder or in your spine, or anywhere – but with pulmonary TB one of the biggest problems is that patients often become very deconditioned,’ says Ms Ricketts.

‘Patients sometimes have long admissions, so they often need rehab to help build up their muscle strength and get their mobility back.’

Inpatients with pulmonary TB do not usually need respiratory physiotherapy, she adds, unless they develop pneumonia or an infection that needs chest clearance. And their recovery times can vary, depending on their general health and the strain of the disease.

‘The treatment of MDR TB tends to be significantly longer, more complicated and have a greater risk of side effects,’ says Mrs Ricketts.
‘And, with the increased incidence of TB, we are seeing larger numbers of patients that are more complex to treat and this is challenging our clinical reasoning and historical practice.’

Due to the highly infectious nature of the disease physios and other clinical staff have to take precautions before they treat patients with TB. Those with pulmonary TB are kept in isolation while they are infectious.
‘On the ward there are negative pressure rooms for containment isolation,’ explains Ms Ricketts. ‘If a patient is confirmed with TB then we have to wear masks, especially during chest physio or aerosol generating procedures [which stimulate coughing].’

The National Institute for Health and Care Excellence recommends that clinicians only wear masks in cases of suspected MDR TB, but many trusts take a more pragmatic approach and recommend wearing masks in all cases, says Ms Ricketts.

‘That is one of the most challenging things: building up a rapport with the patients while wearing a mask,’ she says.

‘Patients get so much from facial expressions, so not being able to see your face can be difficult. You have to think about your communication and body language skills – and with some patients there is a language barrier as well… Talking through a mask to someone who doesn’t have English as a first language can be a challenge.’

Patients with TB can present with complex neurological deficits that are secondary to the brain or spine being infected.

As a result, Ms Ricketts and her team work jointly with physios and an occupational therapist from the trust’s neuro-outreach service, coordinating early assessment and management.
Nicola Green, a highly specialised physiotherapist, is part of the trust’s neuro-outreach physiotherapy team. ‘We see patients with all sorts of neurological impairments – it could be mild balance problems, low alertness levels or something more severe,’ she says.

‘What we see the patient presenting with depends on which area of the brain has been damaged.’
Neurological damage can lead to various physical symptoms, such as spasticity or balance problems, or affect the patient’s cognitive function.
Ms Green says the early management of patients with complex neurological needs can include seating, cognitive assessment and behavioural, tone and positioning management.
Patients with neurological damage caused by TB may have long-term rehab needs. In these cases, Ms Green says patients are often referred on to specialist community services or inpatient units, such as the Wolfson Neurorehabilitation Centre based at St George’s Hospital or Queen Mary’s Hospital in nearby Roehampton.

The physios at St George’s have introduced some new working practices to combat complex cases of TB.
‘As physios we would never have previously used MI-E [mechanical insufflation/exsufflation] cough assisted devices or IPPB [intermitted positive pressure breathing therapy] with infectious TB patients,’ explains Mrs Ricketts. ‘However, over the last year we have used MI-E effectively with a handful of infectious TB patients.’
Mrs Ricketts explains that positive pressure devices have traditionally being contraindicated in these cases, due to the risk of a rupture to the patient’s pulmonary artery and an increased risk of the airborne transmission of TB.
‘But expert opinion is now changing about the use of positive pressure for cough augmentation in this patient population under certain circumstances,’ she says.
New guidelines have been jointly developed by Rachael Moses, a consultant respiratory physiotherapist at Lancashire Teaching Hospitals NHS Trust, Will Ricketts, a respiratory consultant with a special interest in TB at Bart’s Health, and Nicholas Hart, clinical director at Lane Fox Respiratory Unit, part of Guy’s and St Thomas’ NHS Trust. The guidelines on the use of mechanical insufflation: exsufflation in patients with TB are now under peer review.
Ms Ricketts says there is a gap in evidence for the role of physiotherapy with patients with TB. ‘In our day-to-day practice we can clearly see the impact that physiotherapy, and in particular our model of shared care between two teams, has on individuals and their recovery,’ she says.
‘But it would be great for physiotherapists working in this area to share best practice, develop research projects together and help build the evidence base to further inform practice and raise the profile of the work we do.’

TB is an infectious disease caused by bacteria, which can be passed on through coughing and sneezing. Most people who get the condition have had prolonged exposure to an infected person.

TB can cause disease in any part of the body, but it most commonly affects the lungs. This is known as pulmonary TB, and it is the only infectious form of TB.

The most common symptoms of infectious TB are:
With treatment, TB can be cured completely with no long-term effects. But left untreated it can cause permanent damage to organs and tissues and prove fatal.