Physio student and disabled athlete Kadeena Cox tells Robert Millett how she struck gold in the London Stadium in July. 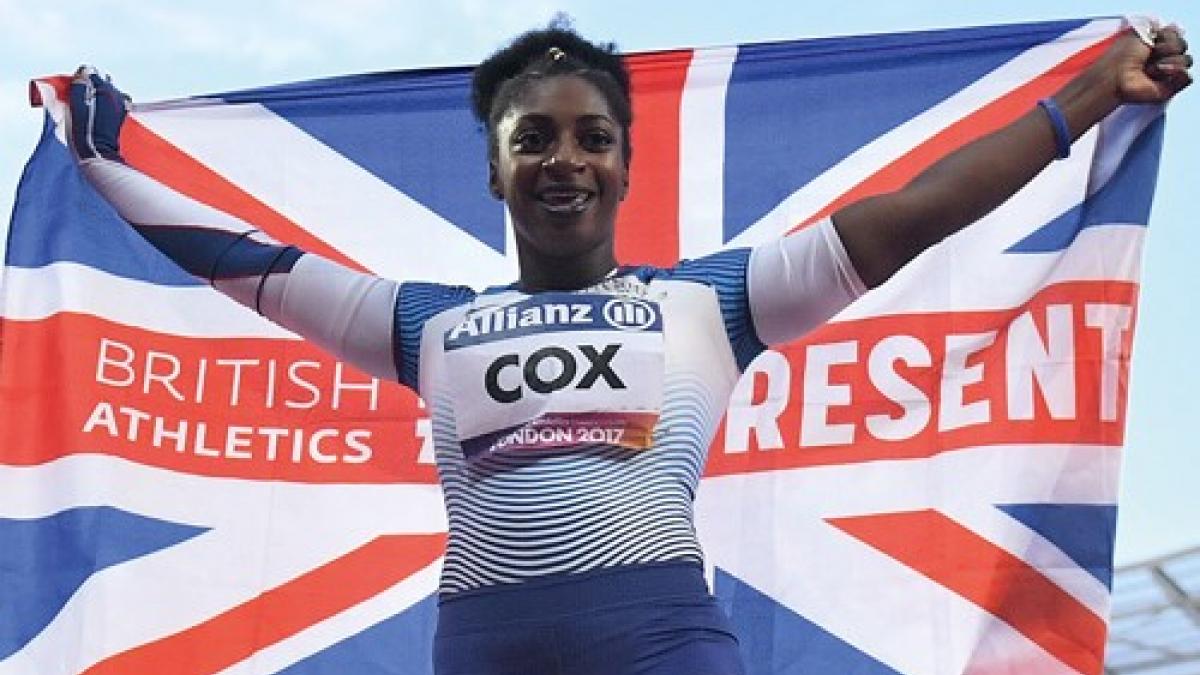 Many physiotherapy students will shortly be unpacking books and course notes as the academic year starts. But there’s nothing ordinary about having a Team GB uniform and three medals in your bag. Kadeena Cox, who is about to begin her third year at Manchester Metropolitan University, had a stand-out summer in which she achieved a triple medal win for Great Britain at the World Para Athletics Championships.
These took place in London from 14-23 July. Ms Cox, who has multiple sclerosis (MS) and races in the T8 disability category, won gold in the 400 metre race, silver in the 100 and bronze in the 200. The student, who is 26 and lives in Leeds, told Frontline: ‘It was a really good championships for me. It was a bit tricky, in terms of managing my condition and because I had a hamstring injury, so I was a little worried going out there.’
Ms Cox’s success at the championships came in the wake of an impressive performance at last year’s Paralympic Games in Rio de Janeiro, Brazil, where she won medals in two different sports – gold for track cycling and bronze for athletics. But competing in London was a ‘totally different’ experience, as she explains: ‘This time the crowds were all cheering for us, whereas in Rio they were mostly cheering for the Brazilians. To win a medal in front of a home crowd was amazing. The support we got, and the noise they made, was insane. It lifted you up, helped you down the track and made you want to get a medal.’

Ms Cox competed as an able-bodied athlete until 2014, when she had a stroke and was diagnosed with MS. ‘I have dystonia on my right side, so I have a lot of uncontrolled movements and spasms, which can get significantly bad, and weakness throughout that side,’ she says. ‘I also have burning, tingling sensations and in other areas I have little or no sensation. But I’ve got so used to all the things I have to deal with that I don’t see them as issues anymore.’
Ms Cox says her MS can hamper her studies, as the condition causes fatigue and affects her memory and concentration. ‘It does hinder my ability to focus in lectures or when I’m sitting at my computer, trying to get work down and remember what I’ve learned. So I use a Dictaphone and an iPad to take notes when I’m on placement, as I can’t write for a long amount of time. And because of my slower typing and lack of concentration I get extensions on my assignments.’
Her course work has given Ms Cox insights into her own medical issues and helped her sporting career. ‘I have a better understanding of my condition, what is going on with my body and why it reacts the way it does. And it’s given me an understanding of how to prevent injuries, and what I can do in the initial phases when I do get injured.’

Alongside her studies, Ms Cox continues to train for events such as next year’s Commonwealth Games, to be held in Queensland, Australia. Her weekly schedule includes two track-running sessions, three gym workouts and two cycling sessions. Balancing her studies and her training ‘can be tricky’, she says. ‘Managing placements has been a juggling act. But my university has been massively supportive and I’ve been lucky to have great clinical educators who have been really helpful.
‘Due to my MS I do shorter placement days, which allows me time to recover and get my training sessions in. And I go to pre-placement meetings to talk about my condition, how it presents and how that impacts on my working day.’
With all her commitments, Ms Cox says she doesn’t get many opportunities to ‘just hang out’ with fellow students – much as she’d like to. ‘Being on the British team for two sports, while also doing physiotherapy placements, doesn’t leave much time for socialising – let alone sleep!’

Ms Cox applied to study physiotherapy after witnessing the variety of roles the profession offers, due to a combination of her previous work experience, some sporting injuries and the rehab she received following her stroke.
‘I’ve always had an interest in helping people and I’d had lots of sports physio for my hamstring and Achilles tendon. Then I spent quite a lot of time working in care homes and in specialist autistic centres, where I saw aspects of physios’ work and their role in rehabilitating people. That ability to aid someone in that process, to help them do something they couldn’t do before, seemed like a very special thing to me and I really wanted to be able to do that. Then I had physio myself after my stroke and I continue to have it to help me manage my MS symptoms.’
While continuing to strive for sporting success, Ms Cox is also looking forward to graduating. ‘I will probably end up specialising in neuro, and I’ve got a special interest in paediatrics as I’ve worked a lot with children with cerebral palsy, so that’s something I’d like to go into,’ she says.
To Ms Cox, the best thing about being a physio student is ‘the opportunity to learn and be taught a job where you’re going to be able to help people’. And her top tip for any new students is ‘make sure you manage your time well.’ fl