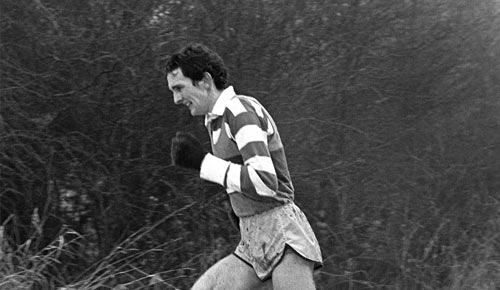 Neil Black has seen the future of elite sports physiotherapy and it’s thrilling. It’s so exciting in fact, that he can barely hide his exuberance.

His excitement is understandable because as performance director for UK Athletics, his remit is to take athletes known only to track and field aficionados and turn them into household names by ensuring they win medals – ideally gold ones – at major championships.

And in the two years since his appointment he’s done that in spades, with the GB athletics team securing more medals at this summer’s European Championships than ever.

Having qualified in 1981, Mr Black has been there from the very early days of elite sports physiotherapy to witness, and partly mould, its extraordinary development.

‘When I think about physiotherapy and sport in the mid-80s, the commonest thing would be for someone to suggest an athlete has an ultrasound, do some simple exercises and put an ice pack on it,’ he says. ‘Now, it’s a different world. The knowledge and the way it’s applied, the team of people involved and the way they interact and work together. It’s unrecognisable.’

Mr Black’s enthusiasm was fired when as a promising middle distance runner in north east England he was treated by physiotherapist Norman Anderson. ‘An amazing guy who loved his job’, Mr Black says of the man who was seen as something of a guru figure for famous local athletes such as Brendan Foster and Jonathan Edwards.

He decided there and then that he wanted to be a physio, but after qualifying from what was then Newcastle Polytechnic he deliberately steered clear of an ‘easy’ route into sports physio, instead focusing on disabled patients after competing his NHS rotations.

But eventually his prowess as a runner brought him to the attention of an innovative sports injury clinic opening in Newcastle, and he never looked back. He moved into private practice and developed a reputation for treating sportspeople, and ‘got more and more interested in the systems that were supporting Olympic athletes’.

Mr Black was appointed national lead physiotherapist at the English Institute of Sport, and became chief physio for Loughborough-based UK Athletics in 2004.

He became sports medicine and science lead in 2007.

During this time he worked closely with head coaches supporting them in their performance decisions, and over time he helped to draw up the multidisciplinary model for producing incredible athletic performance.

The UK elite athletics world now doesn’t really refer specifically to physiotherapists, talking instead of physical therapists. It is, he says, one of the first sports to look at skill sets rather than rigid areas of expertise.

The aim is to cluster this knowledge, experience, and technical know-how around the athletes, with coaches and therapists introducing a series of small inputs designed to get the very best out of training sessions.

‘Take this morning here at Loughborough’, he says.

‘We probably had 15 athletes, six or seven physical therapists, 10 coaches, two biomechanics, and a sports psychologist dropping in and out.

‘It’s a very productive way of working, although it is very expensive, but we are in the business of winning medals and competing with other countries that will be putting in their own resources’, he says.

The National Lottery has helped, funding much of the work, which allows the creation of small, bespoke teams to support athletes including Olympic champions Mo Farah, Jessica Ennis and Greg Rutherford.

And it’s not just during training sessions that this attention to detail applies. The GB athletic teams are becoming ‘experts in recovery’. At the European championships, the GB team was the only one to use whole-body cryotherapy, as well as heated clothes to keep athletes warm prior to competing, while support staff brought drinks to athletes giving interviews in the media ‘mixed zone’ to ensure they began to recover straight after competing.

‘The real critical thing is understanding the timing and order of importance of this bespoke support, and that’s something I’ve learned from physiotherapy’ says Mr Black.

‘You can know what to do but if you don’t get the right application in the right order and with precision, it’s no good.’

This approach to elite sport is a constant struggle for improvement, and what a rate it’s evolving at. ‘Sports medicine is so juvenile it is untrue, and one of our strengths is that while we are pretty pleased with what we have done so far we know we are really only at the beginning,’ says Mr Black.

‘Physiotherapy will be a critical part of that – and I am a huge supporter of physiotherapy – but I’d like it to be confident enough to say it is only part of physical therapy supporting sports performance.’ He urges young physios wanting to enter this world to keep their minds open and be prepared for a seat-of-the-pants ride in an area of the profession that is changing almost week-by-week. ‘They need to understand that we are part of a team and realise that their role at any one moment in terms of what they do or say might be the most important thing in the care of that athlete, but two minutes later their role is say and do nothing,’ says Mr Black. fl