Public health: a picture of health? 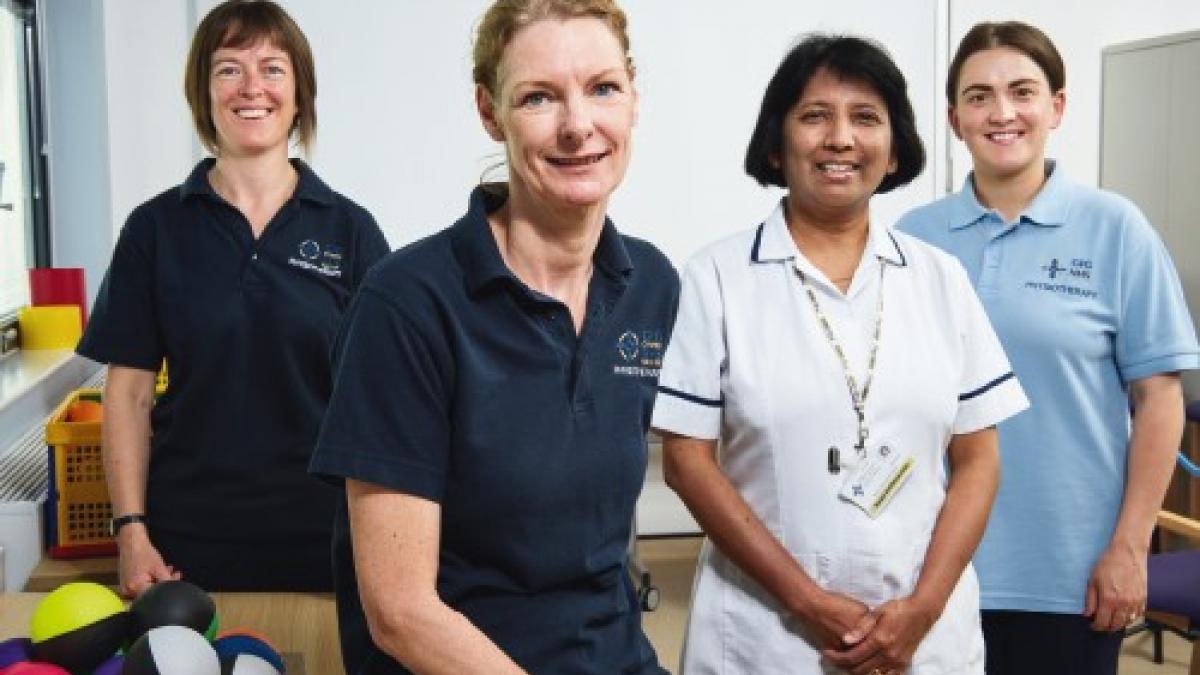 ‘We are fire fighting,’ says Naveed (Nav) Iqbal, the team lead for community physiotherapy services at Cwm Taf University Health Board. Mr Iqbal is based in Merthyr Tydfil, the Welsh Valley town that was once synonymous with the mining industry. He is talking about the continuing battle to keep many older people in his community safe from trips and falls when they live in houses that can be difficult to navigate.
‘My patients live in tiny cottages with narrow, steep stairs. It’s like an obstacle course for them and it means they can’t get out,’ he says. ‘And, due to the cottages’ cramped nature and construction materials, the council repairs team say they can’t do much to improve things. We would like to do health promotion work with these patients but we are constantly firefighting. Ninety nine per cent of my work is with frail elderly people. We have many patients with lung disease and there’s a massive increase in dementia, and so hundreds of falls.’
The legacy of decline since the demise of mining more than 30 years ago means the people of Mr Iqbal’s patch – the three valleys of Methyr, Cynon and Rhondda – are among the most unwell communities in the UK. Obesity, mental illness and misuse of drink and drugs are rife.
Debbie Davies, deputy head of physiotherapy at the board, and a Welsh representative on the CSP council, is clear. ‘The 300,000 people in our catchment area live for three quarters of their lives in good health. Compare this with more affluent areas of Wales where people live out nine tenths of their lives in good health. That is a massive amount of time to live in ill health.’

Arriving in Merthyr after a rattling all-stops train journey along the beautiful River Taff valley from Cardiff, the town centre is busy but far too many people look overweight and unwell.  Substance misuse is responsible for a significal number of strokes among people under 30, says specialist neurophysiotherapist Louisa Walker. ‘It’s very difficult when you see a young father who can’t pick up or play with his children.’
Levels of sickness are borne out by prescribing rates. Ms Davies says the NHS in Wales writes, on average, 26 prescriptions per patient a year. In England and Scotland, it’s 19. And recruitment and retention rates for GPs and physiotherapists are as troubling as in many parts of north-east England, where there are similar high rates of unemployment and chronic ill-health.
In a bid to reduce the pressure, and create more fulfilling and responsible roles, a brand new model was launched in the summer. It involves physiotherapists taking on more of the musculoskeletal (MSK) burden in general practice: ‘The team comprises a lead physio, two Band 7s, 8 Band 6s plus admin and support staff – all paid for with money from the four local GP boards,’ says Ms Davies.
There are 180 physiotherapists working for the health board, many home grown. Mr Iqbal feels that they bring much needed continuity of care, which is in part missing due to difficulties in recruiting GPs. ‘We know many patients with long-term conditions. We can build up a rapport with them and we aren’t constrained by 10-minute appointments,’ he says.
In April, the board launched the Stay Well at Home service, which aims to pull together health and social care services to help prevent unnecessary hospital admissions, reduce waits for patients after treatment and ensure patients can return home as swiftly as possible. The new service employs occupational therapists, physiotherapists, social workers and assistant therapy practitioners in nearby Llantrisant and at the Prince Charles Hospital in Merthyr Tydfil.

As part of the effort to tackle obesity, physiotherapists can refer patients to the Welsh National Exercise Referral Scheme. Sessions cost £2 and classes are tailored to suit participants – some are low-impact or even seated. But getting frail and immobile people to classes can be difficult, says Ms Walker. ‘There is not always the transport system, many can’t afford taxis and some say exercise classes cost too much.’
Ms Walker also points to a lack of knowledge about nutrition and what healthy food might be. ‘One man told me he wanted to lose weight so we talked about healthy options. He suggested pasta. I asked what he would have with it. He suggested bread. Other people say they are cutting out fizzy drinks, like cola, and having energy drinks instead!’
While living with ill-health can be grim, Ms Walker, Mr Iqbal and Ms Davies all describe a community that is close-knit and fun-loving. ‘Everyone speaks of their “aunties” down the road when they are not even related,’ says Ms Walker.
In the heavy snows of 2012, Mr Iqbal’s team got calls from concerned neighbours in remote areas saying ‘we haven’t heard from so-and-so, could you go and check on them’.
While the mines have closed, Merthyr is still a place where chimneys pour with smoke. On retirement, miners and their families were entitled to a yearly pension that included coal. Ms Walker also talks about the commemorations a year ago to mark the 50th anniversary of the disaster at Aberfan – four miles from Merthyr – where a mountain of spoil from the colliery engulfed cottages and a primary school killing 116 children and 28 adults. ‘That is still quite difficult for people to deal with – many moved away because they could not cope,’ she says.
Things are not all gloomy. The beautiful scenery brings in tourists. Mr Iqbal, a cyclist, sings the praises of Bike Park Wales, the UK’s first full-scale mountain bike park, which starts just outside town. The River Taff is a great place for walking, kayaking and birdwatching.
The team’s home is in the gleaming £35m Keir Hardie University Health Park, which opened in 2012. It’s an innovative one-stop shop for physiotherapy, occupational therapy, social work, outpatient clinics and GP surgeries.
Physiotherapists say they would like more extensive diagnostic facilities as patients have to travel to Pontypridd for some investigations. However, Ms Walker says patients really like the Keir Hardie Health Park: ‘The name was carefully chosen to emphasise health, rather than an institution.’fl

Louisa Walker is one of a handful of physios in the UK who uses SaeboFlex gloves. The system, developed by two US-based occupational therapists, comprises  a gauntlet-like splint that helps increase muscle tone and develop better grip and release skills. The glove has adjustable spring-loaded pulleys that are attached to the fingers and thumb that pull the hand open.
SaeboFlex uses repetitive exercise to exploit the brain’s plasticity – the ability to re-programme itself after a stroke or other brain injury. The system, which comes in a large wheeled carrier containing components needed to suit each hand size, means that more than one patient can be treated in a session.
A full set of equipment costs around £25,000.
Louisa also uses a Saebo Mobile Arm Support, or SaeboMas, a weighted and sprung frame structure which can be adjusted to provide ‘zero-gravity’ support for patients with shoulder weakness so they can carry out exercise drills to improve eating or drinking.
Ms Walker says she is in the process of applying for a full master’s degree and thinking about doing her research project on work using the system.

Talygarn House, 20 miles south of Merthyr, was a Victorian mansion that was converted into a hospital and convalescent home in 1923 for miners injured at work. Ceri Thompson, a former miner, now curator of coal-mining collections for the National Museum of Wales, says the facility aimed to get men fit again as soon as possible because there was such a shortage of manpower.
At any one time, around 100 miners, aged 16-70, were in residence. It seems to have been a great success. In 1949, for instance, Talygarn treated 2,209 patients. Of these, more than 90 per cent returned to mining – 69 per cent to their normal work and 23 per cent to lighter jobs. During this period, the hospital employed four orthopaedic surgeons, a matron, a female physiotherapist, four male remedial gymnasts and a craft instructor.
The hospital was equipped with gyms, radiotherapy and massage departments. Due to the need to harden up the men for the collieries, a carpentry shop was provided. Later, two replica coalfaces were installed so that patients could practise for a return to work.
Mr Thompson says that in the 19th century, surgeons or apothecaries were retained by mines to provide basic care. ‘Most people in work paid into a friendly society, which would have paid benefits to miners who were out of work due to illness or injury. If they couldn’t afford the doctor, people relied on folk remedies.’
High accident rates drove the creation of the Mines Medical Service in 1944 and the establishment of medical treatment centres in pithead baths. Following nationalisation and the creation of the NHS in 1948, some 200 medical centres and 473 medical units were established. By the 1970s, the service was the biggest industrial health service in Britain employing 47 medical officers and 200 nurses. Talygarn was taken over by the NHS in 1951 and continued as a rehab and physio centre until it was sold in 2000.