Lesley Mercer, who led the battle for fair pensions for CSP members, reflects on what it is like to face retiring from the CSP later this month. 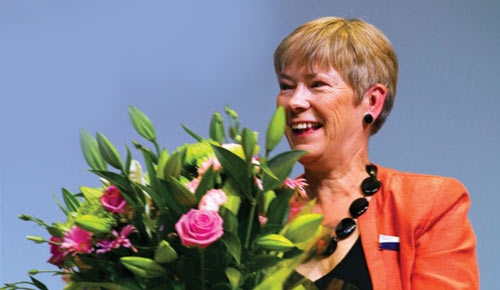 It’s hard not to have mixed emotions on turning 60.  But retiring from a job you have loved dearly at the same time makes things even more complex.

I started work with the CSP back in 1995 as a senior negotiating officer, after having worked for a number of other trade unions before then. I was allocated to the society’s East Anglia and Oxford regions, which meant lots of travelling but never a dull moment. I was lucky to work with two brilliant networks of stewards and safety reps and still get a kick when I bump into a member I haven’t seen for a long while and they say ‘I remember you when you were our CSP officer in ...’

While no year can ever be described as quiet in industrial relations terms, 1995 was a corker when it came to challenges. NHS trusts had recently been created, requiring membership bodies like the CSP to seek union recognition agreements with each and every new employer in place of just the one national agreement.

On top of that the government of the day decided to break up national ‘Whitley’ terms and conditions in favour of local pay. A CSP-wide ballot for industrial action and numerous local grievances followed. Huge chunks of local union rep and management time were swallowed up negotiating local pay and grading structures.  Life as a CSP officer was far from peaceful! And that was without counting my external roles as an employment tribunal panel member, and independent lay chair for the NHS complaints procedure.

Thankfully the local pay experiment was eventually abandoned. This paved the way for negotiations under a new government to establish what became known as Agenda for Change. By then I was combining regional work with the role of assistant director in the society’s employment relations and union services function. One of my first roles was to represent CSP members in the first major review of the NHS pension scheme. This involved long hours of negotiations, sometimes far into the night, and a veritable forest of paperwork. For light relief, I sought election to the TUC general council and swopped my employment tribunal role for membership of the government’s Central Arbitration Committee.

Then, in 2005, I was appointed director of the CSP trade union function, which I viewed then and ever since as an enormous honour. The working years that followed had many good moments but, in industrial relations terms, my memory is dominated by the far-reaching impact of the worldwide recession, growing competition in the NHS, several difficult years of graduate unemployment and the start of regular trade union-wide marches and rallies.

Some events buck that trend such as the magnificent support shown by CSP members for the November 30 2011 strike over pensions and the turnout for the massive TUC demonstration on March 26 earlier that year. And for me personally as director, there was the unwavering support of successive industrial relations committee and council chairs.

One year later, I was proud to be elected as TUC president, the first person to be drawn from a combined professional body and trade union. And I felt even prouder later in the year to be awarded honorary fellowship of the CSP. I know is it a phrase so often brought out at award ceremonies, but neither of these personal achievements would have been possible without the enduring support of my colleagues within the trade union function, the senior leadership team, and the wider CSP.

With just a few weeks to go before my retirement on 30 September one question I am now regularly being asked is ‘what are the highlights of my time with the CSP?’  Not an easy one to answer. Tempting though it is to cite the ‘big’ events like those I have just mentioned, what I think will stay with me for longest are the under-the-radar success stories, such as helping a member facing dismissal to retain their job, and all the positive feedback that society members have so generously given over the years. And I have to mention too the camaraderie and team spirit that forms the core of the CSP.

I can’t say I’ve had what I’d consider a ‘low’ moment at the CSP, although there have been an abundance of challenges and scary situations. Preparing to chair the four-day annual congress of the TUC was one such occasion. Speaking at a gay pride festival in Trafalgar Square and realising that who the largely teenage audience actually wanted to hear was the boy band coming on after me, was another. And I will never forget the moment, in the autumn of 2011, of waiting for the Electoral Reform Society to phone through the result of the CSP pension ballot, with an industrial relations committee meeting fixed for later that day.

Looking forward, I think the next general election will be a very significant one for CSP members for many reasons. But whatever outcome, I think the society is in good shape to meet whatever is thrown its way, building on its strengths as a professional body and trade union. I have not a shred of doubt that my successor as trade union director, Claire Sullivan, will do an excellent job and that the society’s industrial relations committee will continue to ensure proper governance. The willingness of so many CSP members to give up their time in this way is not the kind of asset that shows up on a balance sheet, but worth its weight in gold.

As for me, I am not exactly intending to put my feet up. I am planning to combine freelance employment and stained glass work with voluntary work, still leaving time – hopefully – for some serious rest and recreation.

Oh and yes, I will be there with the CSP contingent on October 18 supporting the Britain needs a Pay Rise rally. The only difference is that I will have travelled there using my wonderful (and free) 60+ London travel card! fl

Working with Lesley over eight years as industrial relations committee (IRC) chair was an amazing experience. I learnt an incredible amount as Lesley very much leads by example. She always worked hard to improve the working lives of CSP members.

Lesley put 100 per cent commitment into everything she did from preparations for our IRC meetings to tough negotiations with employers. She always had the CSP at the heart of what she did. When TUC president, she used any opportunity, where it was appropriate, to talk about physiotherapy. Her thorough approach was evident when the IRC needed to make difficult decisions, for example industrial action over the pension dispute.

Lesley also used her commitment to social justice to help members see that physiotherapy does not sit in isolation, and an interest in wider social issues is very much in line with our core principles of making peoples’ lives better. Alex McKenzie, former chair, CSP industrial relations committee

Lesley has been an outstanding trade unionist and tremendous friend to working people of all backgrounds. As an active member of the TUC’s executive and general council – and as our Congress president during 2012-13 – she has also done much to raise the profile of the CSP and physiotherapists across the wider trade union movement. An eloquent champion not just of her members but also of the immensely valuable work of the physiotherapy profession, Lesley has been instrumental in challenging the government’s attacks on the terms and conditions of dedicated public servants. Above and beyond this, her commitment to keeping our NHS in public hands has been second to none; equality, fairness and social justice are what have always inspired Lesley. I have been enormously proud to work closely with her over the years, and I wish Lesley all the best for a long and healthy retirement. Frances O’Grady, TUC general secretary

Anyone involved in employee relations will know that tensions can run high, personal values can run counter to rational debate and stakeholder relationships and politics can at times seem overwhelming. At the centre of that is trying to do the right thing for patient care, in the short and in the long term. Those who had the privilege of working with Lesley will know she managed to balance this perfectly. With great skill and commitment to seeking solution, she was always calm, always sincere and always putting patients first. These background efforts are not always appreciated by the wider system but are crucial to the partnership working we enjoy in the NHS today. She will be greatly missed. Dean Royles, chief executive, NHS Employers

I feel honoured to have worked with Lesley.  She’s really modelled how a joint trades union and professional body produces the best of both. Her respect within the trades union movement was helped by her sense of humour and gentle manner too. Sue Rees, CSP chair of council

Lesley has been a passionate campaigner for the physiotherapy profession, individual members, the health care sector, patients, carers and service users. For a relatively small trade union, the CSP certainly punches above its weight, primarily because of Lesley’s leadership and the respect for her across the trade union movement. Ann Green, former CSP chair

TIMELINE: CSP’s journey as a union