Physiotherapists are experts in weight management, but less good at promoting their skills. Gill Hitchcock reports. 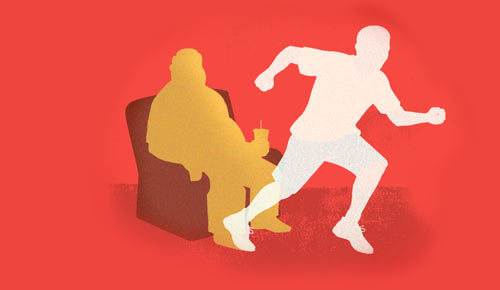 Waistlines are one of the few growth areas in the UK. Like the economy, we have slumped and physical inactivity is contributing to the nation’s widely acknowledged obesity ‘epidemic’. Official statistics  show that in England alone more than 60 per cent of adults were overweight or obese in 2012; while fewer than 50 per cent of men and 40 per cent of women reported walking for 10 minutes or more on at least one day in a month.

The figures are shocking. But Andrew Coward, who is responsible for commissioning obesity services at Birmingham South Central Clinical Commissioning Group (CCG), believes we are ‘at the foothills of the Himalayas’. He says Birmingham’s health and social care budget is £2.9 billion and predicts that if the current trajectory continues, obesity-related problems will account for £2.6 billion by 2030.

‘No system could cope with the disease burden that is potentially emerging,’ he says. ‘I am up to my eyeballs in NHS policy in terms of commissioning and reconfiguration, how should the hospital sector or community services look in the context of austerity or whatever. And as I keep saying to colleagues, no matter which models we come up with, if we don’t get this one right then anything we do is doomed to failure.’ Dr Coward believes that although some cities are in a worse position than others – whether it’s relatively deprived Birmingham or well heeled Oxford – obesity is an issue. ‘And as we are in a crisis, we need the physiotherapy profession on our side,’ he says.

To promote exercise, Birmingham South Central CCG tends to use ‘lifestyle advisers’ commissioned by the city council and supplied by third sector organisation Gateway. Dr Coward says that 99 per cent of the CCG’s referrals to community physiotherapists are for musculoskeletal (MSK) problem and is he unsure whether they provide advice on diet and exercise.

CSP chief executive Karen Middleton recognises that the physiotherapy profession suffers from a lack of awareness about its scope: ‘You need to legitimise discussing weight issues and physical activity as part of treatment. I think physios do that now, but what I would say is that this is not visible to commissioners. That is what I think is the issue.

‘If your role is part of a weight management programme, then there definitely isn’t a problem and it will be visible that that is what you do. It’s the hidden work we do around physical activity that I want to see getting a higher profile.’

This is a tough one. While there is evidence to show that multidisciplinary interventions for obesity are effective, it is difficult to measure the efficacy of physiotherapy on its own. Obesity is a complex condition to which diet, exercise and a range of psychological and social factors contribute.

Sport can be a ‘turn off’

Ripal Patel, a CSP adviser and practising MSK physio, wants more research into the role of physios in managing and preventing obesity, but says that promoting good health is the remit of all frontline practitioners. By raising weight-related issues physiotherapists can have a huge and positive impact.

‘I‘m not suggesting GPs refer everyone for physiotherapy just because they are overweight, but if there are biopsychosocial reasons why they are not active, then physios can support them to become active by helping to address those reasons,’ she says.

Given the obesity crisis and that a lot of MSK problems are related to body mass index, Dr Coward believes ‘it’s a no brainer‘ that this should be part of a physiotherapist’s specification. In Ms Patel’s experience, patients who are overweight can respond better to advice from a healthcare professional than an exercise instructor.  An initial referral to a physio can be a good way to get someone started with short-term goals, with a view of course to handing them over to a community organisation.

Ms Middleton thinks another problem is that when people think about obesity management and physical activity they automatically think of sport – and the next extension is sports therapists.

‘The link between obesity management and sport is sometimes unhelpful,’ she says. ‘Instead, you need to think in terms of physical activity, and then the term “physical” leads you to physiotherapy, rather than “sport” leading you to other professions.’

Sport can be a turn off and physios should be talking to patients who are overweight about adding physical activity to their everyday lives. ‘I mean, if I’m going for a workout I park as near the gym as possible. How ridiculous is that?’ Ms Middleton says.

This approach complements obesity guidance from the National Institute for Health and Care Excellence (NICE). It recommends that interventions to increase exercise should focus on activities that fit easily into people’s everyday routines and are tailored to individual preferences and circumstances. It suggests that ongoing support should be given in person or by phone, mail or internet.

Ms Middleton is a fan of YouTube video Let’s make our day harder, Dr Mike Evans’ take on ‘sitting disease’ and its exacerbation by new technologies and habits such as sitting in front of a screen for hours or texting people in same building. The Canadian medic’s video highlights the single biggest factor in good health: being active.

On the technology problem, Dr Coward comments: ‘Clearly children do lead a more sedentary life style. If you take a child’s life in the ‘60s, a lot of people didn’t have cars. We were lucky to have a television. I hope this isn’t sounding like the Monty Python sketch, but there certainly wasn’t a PlayStation.’

But he thinks there is a problem with physio interventions – certainly in Birmingham – because of an historical shortage of staff and waiting times of up to 12 weeks. He imagines physiotherapists, like GPs, are often under a lot of pressure to get patients through and deal with the problem on front of them. ‘Clearly to do the lifestyle issues – which are critical – you do need the luxury of a bit more time. Given the context of the waiting times for physios, I don’t think they have that luxury.’

Ms Patel, who also works as an MSK physio at east London’s Homerton Hospital, argues that even brief advice from a healthcare professional can be effective in increasing physical activity, however.

Physiotherapists with their education, training and competence in behaviour change, biomechanics, therapeutic exercise, and a wide range of other relevant experience, knowledge and skills are ideally suited to identify, manage and prevent obesity, she says. ‘And as funding is diverted to addressing the impact of obesity, we need to promote ourselves and make our services more commissionable in the future.’

NICE calls for dedicated resources to be allocated so that all health professionals can prioritise the prevention and management of obesity. This may be a tall order for a financially challenged health service, but the alternative may more costly. By the middle of the century we might, as the National Obesity Forum suggests, feel lucky if only 50  per cent of the population is obese and the annual cost is only £50 billion. fl