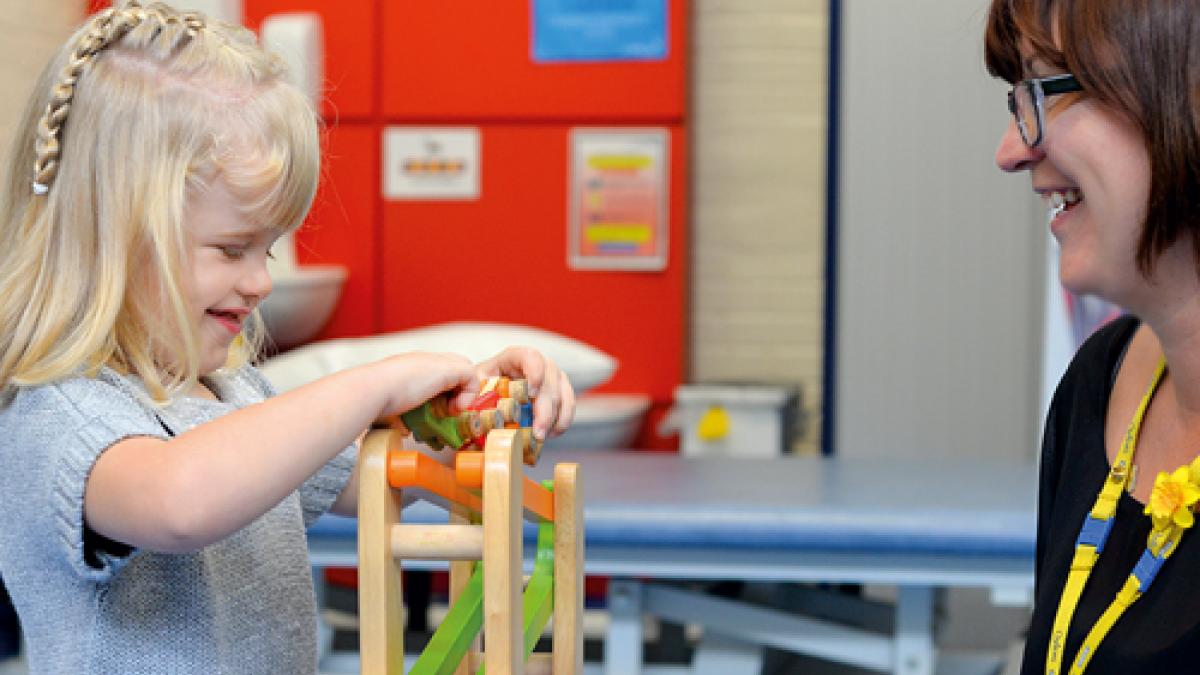 Researchers have found that independent movement plays a vital role in the cognitive and social development of children 1. But children with severe disabilities are often wheelchair bound, restrained by supportive equipment or rely on others for movement. As a result, they have fewer opportunities to learn compared to their able-bodied counterparts.
Interventions such as physiotherapy can help to enhance the motor skills of severely disabled children, but without daily practice the benefits may not last in the long term 2. And studies conducted at the University of Southampton 3,4 have shown that children with cerebral palsy are far more likely to engage with goal-oriented interventions if they are incorporated into daily activities, rather than being delivered discretely with a carer or therapist.
In line with these findings the London borough of Greenwich is championing a collaborative, goal-orientated approach that aims to increase movement opportunities for disabled children.
The Movement Opportunities via Education (MOVE) programme emphasises that movement is a vital factor in the development of a child’s understanding of the environment, spatial concepts and communication methods.
In particular, it focuses on supporting the physical goals of children who have not developed the skills of sitting, standing and walking at the expected age.
The scheme, which has been running since 2010, is based at the children’s physiotherapy department, part of Greenwich community health services and ultimately Oxleas NHS Foundation Trust.
Claire Higgins is the department’s principal physiotherapist and an accredited MOVE co-ordinator.
She explains that the project helps disabled children to move more in their educational settings, by embedding movement practice into their daily routines.  It also provides training for parents, teachers and carers so they can independently deliver the programme.
‘MOVE encourages children to be active throughout the day, not just during their physio sessions,’ says Ms Higgins.
‘And if everyone in a child’s life is helping them work towards a physical goal then they have far more opportunities for practising those movements.’
The initiative began after the trust teamed up with the charity MOVE Partnership to run a pilot at two schools in the borough.  Funding was initially supplied by the UK government’s Aiming High for Disabled Children scheme, but due to the pilot’s success the project has now secured permanent funding of £35,000 a year from the local authority.
Since 2010 the programme’s reach has rapidly expanded. It is now being provided to almost 100 children in more than 20 settings across the borough, including both mainstream schools and special schools.
As project co-ordinator Ms Higgins is responsible for overseeing and managing the service’s development. She works with MOVE assistant Laura Taylor and Lin Wright, the trust’s MOVE outreach practitioner. Team members work to highlight the importance of an ‘everyday’ approach to activity, explains Ms Higgins, and dispel the idea that children should only be ‘treated’ with therapy.
‘The traditional model of therapy would be: I’m a physio, I see you once a week, I give you an exercise programme and then I might do a block of treatment for six to eight weeks,’ she says. ‘But school age children spend five days a week at school and what happens in all those other hours of the day has an impact. So it’s about finding opportunities within a child’s day to maximise their movement potential.’

The programme is available to children aged from two to 16 with severe or complex disabilities. Many of them have developmental delays or genetic conditions;  those with cerebral palsy make up almost half of the typical caseload.
Initially, a baseline assessment of the child’s critical skills is undertaken. This reflects the child’s ability to carry out 16 functional skills, which include unsupported sitting, standing, transitioning from sitting to standing, walking forwards and backwards and walking up and down slopes and steps. The assessment is followed by collaborative goal setting and the establishment of a MOVE routine for the child to carry out at home or school.
‘It could be something like making an independent transition between two pieces of furniture at nursery,’ explains Ms Higgins. ‘Or seeing if it would be practical for a child to sit on the edge of the bed while you help them get dressed.’
Children are also issued with a MOVE passport, which is designed to accompany them throughout their school life. ‘Information from the assessments is collated into the passports and these are given to the school and to parents and travel around with the child to any respite care they have,’ explains Ms Taylor.
The passports help to map a child’s physical journey in a common language and capture a life-long profile that helps them through their transitions, adds Ms Higgins. All the children are monitored and receive, at minimum, a yearly review of their mobility skills and progress. ‘We are finding that in mainstream settings the children need reviews much more rapidly, and some have them every three months. So we assess and set new goals whenever they need it,’ says Ms Higgins.
When a child achieves a goal the team produces a certificate, which is often presented to them during school assembly as a way of celebrating their movement success. If a child masters all 16 critical functional skills they are said to have ‘graduated’ from the MOVE programme. ‘But we don’t stop with the children then, as we then go on to more intricate skills like opening doors,’ says Ms Taylor. All the goals are designed to help children gain lifelong skills and promote self-management. They also have the potential to help reduce lifting, making it easier to deliver care and aiding transitions.
The charity’s research has shown that many children on the programme have made significant improvements in their functional mobility, and their ability to learn. But Ms Higgins says MOVE team members take care not to take sole credit for any improvements to a child’s motor or cognitive development. ‘We don’t claim that this project or the team are the reason children develop, because they obviously have a natural potential to develop and they receive a lot of other input,’ she says. ‘We aren’t making children walk, but we are celebrating movement success. And the MOVE programme provides a structured assessment, a common language and is patient centred – and those are some of the key drivers for health care.’

The team provides free MOVE practitioner training to people in the borough, in the form of one and two-day courses.
Course attendees typically include parents, carers, learning support assistants, physiotherapists and occupational therapists.
‘People often ask what’s the difference between physiotherapy and MOVE, or suspect that training people might be diluting our skills as therapists,’ says Ms Higgins. ‘But this is not about de-skilling physios. We are just imparting knowledge to parents and carers about finding creative ways to help the children perform functional movements every day.’
Ms Higgins adds that her physio role includes providing the children with standardised assessments and looking out for any orthopaedic changes. She also prescribes exercises to help them achieve their goals, which are additional to the movements they follow as part of their MOVE routines.
More than 600 schools and organisations in the UK use the MOVE programme and more than 3,000 practitioners have been trained. In addition, 13 local authorities have made agreements to set up programmes.
‘MOVE is being used nationally, but it is mostly in pockets and limited to special schools so we think we are the first instance of it being taken up as a borough-wide agreement,’ says Ms Higgins. As a result, the team hopes that Greenwich will come to be seen as a ‘borough of excellence’. ‘That’s the long-term vision, that we will be a model for others to follow,’ says Ms Higgins.
She adds that the team welcomes visitors. Physiotherapists seeking more information should email MOVE@oxleas.nhs.uk The MOVE Partnership fl

In 2008, The MOVE Partnership began measuring the progress of 200 children from 18 special schools in the UK over three years. During this time 98 per cent of children on the programme made progress in functional mobility skills.
In addition, 43 per cent of the children showed improvements in their functional skills and more than half (55 per cent) maintained skills or were working towards their next motor milestone.