Physios are proving their worth in new positions. Gill Hitchcock talks to two who have broken through the glass ceiling by gaining ward management posts, which traditionally tended to go to nurses. 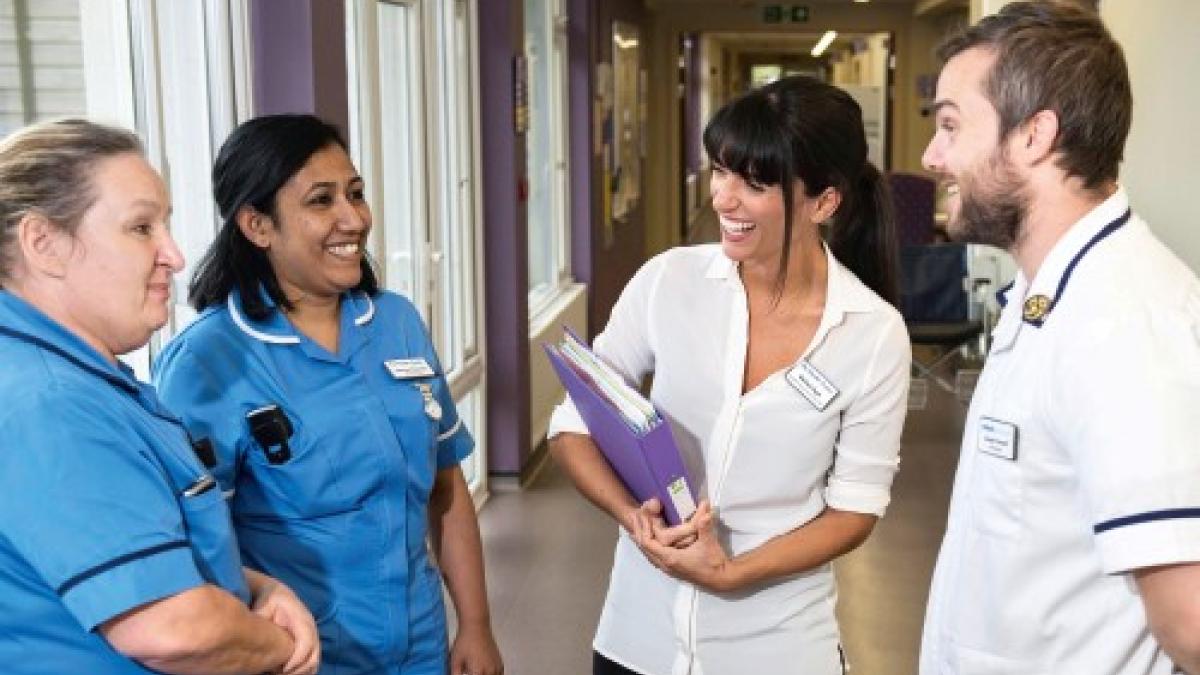 Rachel Pepé with team members at the Sussex Horder Centre

Rachel Pepé was leading the inpatient physiotherapy team at the Horder Centre orthopaedic clinic in East Sussex, when she felt she had reached a ceiling at work. Aware of the potential for further improvements to patient services, she was frustrated by her lack of influence over other professions, particularly nursing.
Then the ward manager left. Although a physiotherapist had never held the post, Ms Pepé reflected on her skills, and what she could bring to the role and, after lengthy discussions with colleagues and others, applied for it.
‘My organisation was initially cautious and I even contacted the Care Quality Commission (CQC) to ask about their views,’ she says. ‘But, when I looked at the job description, and took out a few of the bits that were specific to nursing, there was nothing a physiotherapist could not do to lead the team well – a team that incorporates nurses, healthcare assistants, physiotherapists and occupational therapists.’
Her application was successful and, a year later, Ms Pepé was managing the elective orthopaedic ward in a hospital that received an outstanding rating from the CQC in January.
Ann Ross, chair of the CSP’s professional network for leaders and managers (LaMPS), believes ward management could be a great career move for physiotherapists, saying: ‘It’s an opportunity to influence the whole system. We tend to have a much more holistic view of our patients and from a ward manager’s point of view, we can bring a lot to the table, particularly in patient-centred care.’
While ward managers often have nursing backgrounds, Ms Pepé says, with that profession struggling to recruit, a gap has opened up that physiotherapists can fill – and with flying colours.

At Worcestershire Royal Hospital, senior physiotherapist Lucy Kindley is the manager of Evergreen ward, which mainly provides rehabilitation for older people who are medically fit and awaiting discharge. Keen to retain her clinical work, she shares the role with the nurse ward manager. Her time is split 50-50 between physiotherapy and management.
‘I saw it as a fantastic opportunity to work closely alongside the nurses and to build bridges with other professions,’ she says. ‘It was a way to understand how a ward works and how the different roles on that ward work too. I wanted Evergreen to be a ward that promoted independence with every intervention – I thought the best way to get that across was to lead by example. Managing the ward gives me the opportunity.’
Evergreen ward was initially a temporary measure, opening in 2016 for six months to relieve winter pressures. But the level of rehabilitation, which Ms Kindley says she worked hard to achieve, resulted in 40 per cent of patients who had been designated for further care in a community hospital going home instead. Evergreen is now a fixture.
‘The goal was that, by having a physiotherapist in one of the leadership roles, a rehab ethos would be embedded,’ says Ms Kindley. ‘That was what the hospital hoped for, but nothing was set. I was the one who said “This is what I would like the team to be achieving”, and by getting patients up and out of bed, getting themselves dressed – very much on trend with the #endPJparalysis campaign – we achieve very good results.
‘I was auditing every single discharge from the ward and we were able to prove the positive effect on patients. The chief executive was really impressed and decided to keep us.’
Ms Kindley admits, however, that the transition from working on a ward to actually managing a staff of nurses, healthcare assistants, a physiotherapy assistant and a ward clerk, was a massive learning curve. And, she says it’s a ‘24-7 job’. In fact, her responsibilities don’t finish at the end of the working day; taking weekend or evening calls about patients is part of the job.
As one of the few, Ms Kindley found little information on how to go about taking on the role within the physiotherapy community, but creating a bond with the nurse ward manager and close links with the director of nursing and other managers helped greatly.

In contrast, Ms Pepé contacted the CSP, asking to be put in touch with members who held similar roles. Comments in iCSP helped too: ‘We use iCSP as a hospital to engage in discussions about standard procedures, and to gather opinions about exercise, because evidence out there can be vague.’
There is also the LaMPS’ mentorship scheme. ‘We have moved away from being a training provider and provide mentorship if someone wants to link with one of the LaMPS members,’ says Ms Ross.
‘It’s about helping people to see what skills they have that may go beyond physiotherapy. I guess the thing is that, as a manager, you need good leadership skills, to be able to lead by example. These are things that people can be supported to develop.’
One of the biggest challenges for Ms Pepé was getting the nurses used to a different style of leadership. ‘At one point, I thought: I don’t know if I am ever going to win the nurses over. I think it was the fact that I am a physiotherapist and that was unusual. It took time – until we had successes and they could see how things were improving on the ward. It was about gaining trust.’
Physiotherapists and nurses have different considerations, Ms Pepé says. But opening up communication has been a major benefit. One way she achieved this was to get the nurses and physiotherapists to hand over care at the start of a working day, and to get together at midday meetings too.
Ms Pepé takes inspiration from the clinical experiences of a range of professions, particularly agency staff: ‘We don’t use any therapy agency staff, but drawing on the experiences of agency nurses has been interesting because they work in many organisations and see a range of clinical practices. Using agency staff doesn’t provide a benefit cost-wise, but we can ask how are other places are doing things and how it compares to what we’re doing.’

Knowing that it is still pioneering for a physiotherapist to be a ward manager, and inspiring others to think outside the traditional boundaries of the profession, has been a fantastic experience for Ms Pepé. ‘That is not just from a physiotherapist’s point of view – it’s inspiring nurses to think outside their roles, too,’ she says.
Under her leadership, the physiotherapy staff have learned from their nursing colleagues – about medication, dressings, drains and catheters, for example. And the physiotherapists have had much to teach the nurses about exercise and mobility.
Ms Pepé enjoys seeing other professions learn about the physiotherapist’s role in rehabilitation: ‘It is really positive for the patients and fulfilling for us.’
Ms Ross thinks people from diverse backgrounds with the right skills, knowledge and competence are moving into healthcare management. ‘That’s very reassuring,’ she says. ‘Perhaps under old structures there was a glass ceiling beyond which physiotherapists couldn’t go.’
What advice would Ms Pepé offer CSP members who may be considering a move into ward management? ‘Focus on your key skills as a physiotherapist and what you can bring to that role. Don’t be deterred by people telling you it’s not a physiotherapy role because you will have to overcome boundaries.’
Proud of her profession, Ms Kindley continues to wear her physiotherapist’s uniform in white, despite the tradition of ward managers dressing in navy blue. ‘It has taken a little getting used to for visitors because they look for navy and sometimes I have to put myself forward as the person in charge.
‘And it does mean I stand out at meetings – a sea of navy and then me in white. You get used to it though.’fl