Greens, blues and high-heeled shoes: memories of training in the 1940s

Just before her death last year, Brenda Tillotson sent us this reminiscence of physio training in the 1940s. 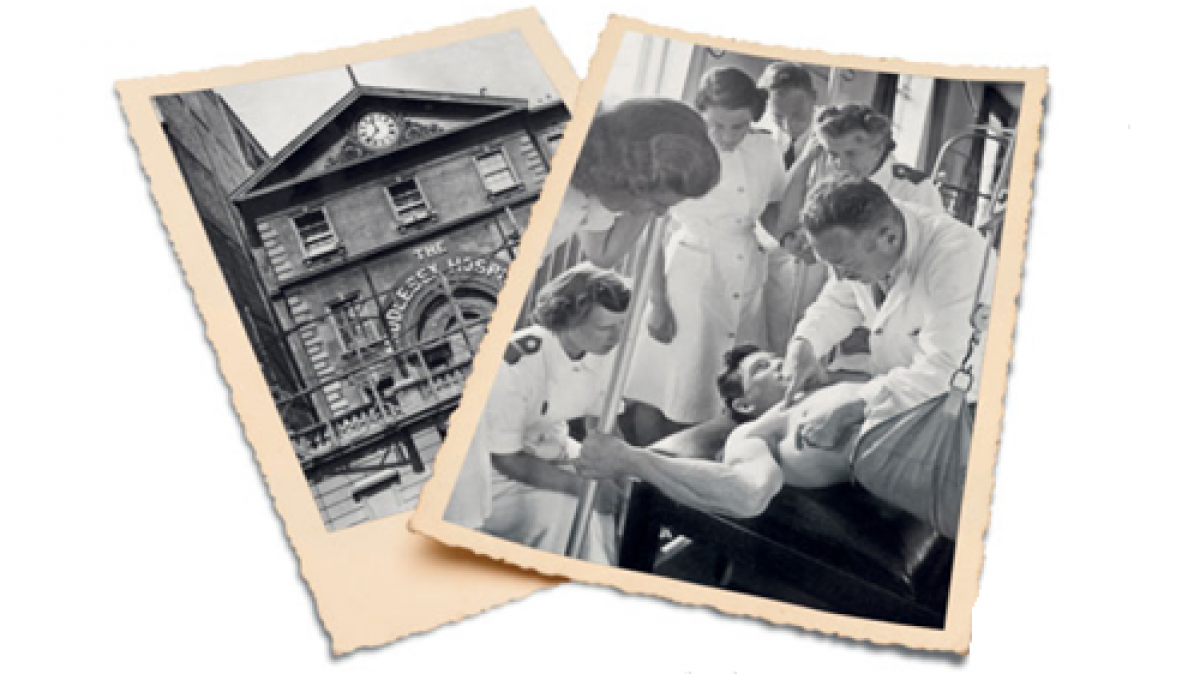 One morning in 1945 I walked through the main doors of the Middlesex Hospital, proudly carrying Gray’s Anatomy under my arm. I was thrilled to be starting my training in massage, medical gymnastics and electrotherapy at this renowned teaching hospital.
The fearsome lady superintendent extended a cool welcome. We students were instructed to be quiet at all times, never pass senior staff on the stairs, always ask permission before entering a ward and address all medical staff as ‘Sir’.
‘Never enter the medical school without a chaperone. And keep all your social life outside the hospital.’ With these words the lady superintendent swept out.
We were then taken through long underground passageways to the physiotherapy school on Cleveland Street, where we realised why our lecture room was in the main hospital. Like many other London buildings, much of the school had been destroyed in the Blitz. Its remaining windows were cracked and taped.
I lived in a dingy room in a hostel beside Westminster Cathedral. Other students commuted long distances from home, or rented tiny rooms where they went down two flights of stairs to wash their dishes in the bath. But the hospital arranged for us to have a daily meat-and-two-veg lunch at an Oxford Street restaurant, which we quite enjoyed.
Clothes rationing was in force and our uniforms, in Middlesex Hospital green, were hand-me-downs from pre-war students. I spent endless hours mending my ‘greens’, which disintegrated further every time I washed them. We wore directoire knickers, with elastic around the thighs, for gym – rigorous exercise classes continued throughout our training – and white lab coats with the sleeves rolled up when treating patients.

Our first lectures were not on anatomy but infections. Boils, carbuncles, pulmonary tuberculosis, syphilis and gonorrhoea were common among our patients. Penicillin had been discovered before the war but was not yet in general use.
Then we started lectures in anatomy, pathology, electrotherapy, medical gymnastics and massage. Hours were spent learning Swedish exercises that seemed to have no relevance to patient care. Thankfully, we were also taught simple breathing exercises and some basic exercises for joints and major muscle groups. With this meagre knowledge, we were let loose to treat patients at the afternoon outpatient clinic.
Most of the patients were Londoners, tough people with a delightful Cockney sense of humour. Some came from Soho: we had been warned not to confuse the ‘massage parlours’ there with massage therapy clinics. One afternoon, a patient ran in panting, ‘Sorry I’m late, deary. I was busy and didn’t have time to put me knickers on.’
Some lecturers assumed we all came from upper-class families and told us we should always accept a salary even if we didn’t require one, as we might be working with people who did.
After three months, our set was sent to Stoke Mandeville Hospital, which had been converted to a military hospital. I found digs in Aylesbury with my friend Pauline Martin. We shared a freezing bedroom, where we donned thick pyjamas and bed socks and wound woolly scarves from our hips to our armpits before climbing into an uncomfortable home-made bed – to be awakened with a thump when the bed legs collapsed.
We loved being at Stoke Mandeville, where the wards were light and airy and we had no more cleaning chores or weekend duties.
Dr Ludwig Guttmann had established the National Spinal Injuries Centre there in 1944. We would stand at attention by our patients’ beds as he gave treatment commands in military fashion. It was a privilege to be taught neurology and neuropathology by him. The only problem was his thick German accent: Pauline and I would spend half the evening translating our lecture notes.
When up and about, the servicemen wore traditional hospital ‘blues’: royal blue trousers and jackets with white shirts and scarlet ties. They asked us to take them out, but there was no transport. One Friday night Pauline, our friend Nancy and I hired a furniture removal van, loaded it with wheelchair patients and took them to a pub.
During cold weather the men played indoor wheelchair hockey and, in the summer, did archery in the field behind the hospital. They had awful wooden wheelchairs but, even so, became skilled in manoeuvring them.
On the plastic-surgery wards we saw severely burnt Polish airmen, whose facial disfigurements caused difficulty in communicating.

Birth of the NHS

The war was ending and change was in the air. In July 1945, the Labour Party won the election and prime minister Clement Attlee announced plans for an NHS. Medical schools were told to accept female students, and four physio students applied to be the first women doctors trained at the Middlesex.
Back in London, Pauline and I found the Middlesex had opened a cafeteria for students. Sometimes we’d go out for egg and chips (fish was too expensive) or treat ourselves to jam tarts and tea at a nearby café.
We were each given a disarticulated skeleton in a wooden box. Finding the bus drivers were on strike, I hitched a lift in a car and sat down next to the good-looking driver. ‘What’s in the box?’ he asked, while negotiating heavy traffic. ‘A skeleton,’ I replied. Luckily, we didn’t crash.
We had some excellent teaching from leaders in their fields such as Professor John Kirk, head of the Middlesex anatomy department, eminent orthopaedic surgeon Philip Wiles and Professor Keith Simpson, the Home Office forensic pathologist, who kept us riveted to our seats as he described murders and legal cases in lurid and amusing detail.
At that time, patients were kept in bed for 10 days to three weeks after surgery. We gave them bed exercises to prevent thrombosis and pulmonary embolism. On the dermatology wards, we treated patients with pemphigus vulgaris and ichthyosis so severe they were unable to move their limbs. We gave exercises to young men with ankylosing spondylitis who were being treated with radiation to the spine.
Patients started to put on weight, though the hospital diet hadn’t changed. Then someone noticed visitors were bringing gifts of grapes, oranges and bananas as they had before the war: the barrow boys were back on London’s streets.

In November 1947, we sat our final examinations. Only 10 of our class of 22 had withstood the physical and academic rigours and qualified. There were no graduation ceremonies; I don’t even remember saying goodbye.
I started work at Edgware General Hospital in north London in January 1948, and later emigrated to Canada.
Though much of what we’d learned was obsolete by the time we started work, it taught us to put up with frustrations, to accept change and to realise that learning is a lifelong process. fl