Physios were at the forefront of the humanitarian response to the hostilities in Gaza last summer. Lynn Eaton reports. 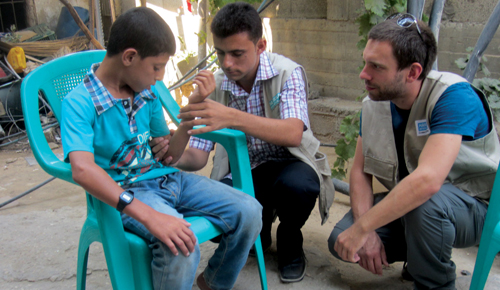 Physios, like many other healthcare professionals, are always eager to help out in a humanitarian crisis. But, when CSP members put their names forward for a new register of volunteers, set up by the UK government in 2011 to help co-ordinate offers of help, many would have expected to be dealing with typhoons or earthquakes.
However, last year volunteers on the UK International Emergency Trauma Register (UKIETR) were called on for a very different situation: the humanitarian emergency in Gaza that followed the Israeli operation in July.
Although it was an entirely man-made crisis the challenges were similar to a natural one, according to physio Peter Skelton, who is no stranger to disasters. Peter is rehabilitation project manager with Handicap International, a charity that provides training for physios on the register. He has been involved in the relief operation after typhoons hit the Philippines in November 2013 (Frontline, 17 December 2013) and in Haiti, Libya and Jordan.
Although the first reaction is to send surgeons in to such situations, Peter and his colleagues knew would not be enough. ‘Whenever you have a large humanitarian crisis, surgery is performed in very difficult conditions,’ he says. ‘There will be amputation, infection, peripheral nerve damage, spinal cord injuries, skin grafts and complex fractures, often with external fixation. That all requires an enormous amount of rehab.’
Handicap International has been involved in Gaza since 1996, working with children with disabilities such as cerebral palsy. So, when the severe escalation in hostilities in Gaza began, his organisation already had staff on the ground.
After an initial assessment team went to Jerusalem in August, three UKIETR teams were sent to Gaza in the following two months. There were 60 rehab professionals on the register at the height of the Gaza escalation, 20 of whom had completed a three-day clinical training course about starting humanitarian work. They were invited to join the mission.
‘Most of these were physios but some were occupational therapists. All had trauma experience, and some had experience of working overseas,’ says Peter. ‘What was really great was that we engaged with organisations like the British Association of Chartered Physiotherapists in Amputee Rehabilitation (BACPAR), the Association of Chartered Physiotherapist in Neurology, Adapt, the CSP’s international health and development network, and the British Association of Hand Therapists. We also worked with several non-governmental organisations.’

But the 20 volunteers weren’t trained for a conflict or post-conflict zone where threats might include being kidnapped or coming under fire. ‘We spent two days in the Sussex countryside going through hostile environment awareness training,’ says Peter. The first of the three teams, including three physios, went out to Gaza with Peter in September, just after the ceasefire was announced, to assess the situation and provide training for the Handicap International teams already in Gaza.
During their visit, physios abandoned their normal duties to transport patients or took on auxiliary roles. They had responsibility for their existing disabled patients, many of whom were  now living in difficult conditions often without water or electricity. Now they had newly-injured patients, many with complex multiple fractures, amputations or burns, who had to be discharged earlier than was ideal.
The local teams were, Peter says, ‘fantastic’. But their physio skills and training were not sufficient for the complex cases they now faced. The two teams of UK volunteers who have been out since worked alongside Handicap International staff, providing treatment but – more importantly – training. ‘We are at a critical moment for the role of rehab in responding to a humanitarian crisis,’ he says. ‘Experts need to be deployed really early.’ fl

Three volunteers reflect on the day that affected them most

We arrived at Tel Aviv airport early in the morning, tired after the flight from Heathrow, but excited. We were driven to Jerusalem and managed a little sightseeing in the old city.
We had planned to go in to Gaza the following day but our permits weren’t ready. Instead we did some teaching preparation. The following morning we got a call which confirmed we were clear to go to Gaza.
We had been briefed on how to conduct ourselves during the Erez border crossing, the official entry point for non-governmental organisation workers from Israel into Gaza.
We each carried huge, black 100 litre duffle bags. They contained minimal personal belongings plus donations for the local Handicap International teams, such as Theraband and compression bandages for amputees. We also carried large trauma kits.
The crossing point is a huge hangar where you pass through turnstiles like those once seen at football grounds. We struggled with the rucksacks, one person going through first, putting the big bags through the turnstiles afterwards.
After three hours, we emerged through a grey sliding door and sat down on two benches nearby, waiting for a man in a golf buggy-type vehicle to appear and drive us along the final stretch of no-man’s land.
After the desert-like border area, my first sight of Gaza was of damaged and blackened apartment blocks in a built up area. We were met by very friendly Handicap International staff and, after one final bag search, we were in Gaza.   Abi Aston is a paediatric physiotherapist  based at the Royal National Orthopaedic Hospital, Stanmore, Middlesex

7am At Handicap International (HI) office for security brief
9am Meet with Rafah area team to start clinical visits. First patient (median nerve and flexor tendon injury) assessment/treatment plan completed by local Gaza team with only reassurance needed from us – fantastic to see the progress in their clinical skills and their growing confidence.
10am Second clinical visit (median nerve and tibial ex-fix, plus patient’s son with head injury). Local physio points out where he lives amid the rubble ... a reminder for me of the situation the clinicians are living and working in.
12.30pm Visit nine-year-old girl, arranged specifically for review of possible lower limb peripheral nerve injury and wound/dressing review. Referred to me and Lesley (major trauma nurse) as local therapy team all male. Simple clinical session gaining patient trust – emotionally this is probably the toughest case we have seen.
13.30pm Debrief with Rafah team. Reassured them they are doing a fantastic job at learning new skills and applying them. Brilliant to feel we are leaving them with tools to continue.
3pm Final mission de-brief at HI office. Extremely positive feedback. We agree to continue work to provide plan/guidance for next time – it’s not ‘if’ but ‘when’. Zoe Clift is an extended scope practitioner at Guy’s and St Thomas’ Hospital, London

Returning to Gaza after a visit six weeks previously, I saw a couple of amputees I’d seen earlier. Ossama was one.
Like so many he’d suffered multiple injuries when his cousin’s house collapsed in the shelling – head and facial fractures, widespread superficial burns, deep wounds to his left leg and an amputation on the right. And he’d ‘arrested’ twice. He was the only survivor of 19, many were relatives.
When we first met Ossama, being able to walk again was naturally a concern for him. He was uncertain if he would get a prosthesis. He had remaining family to care for and was apprehensive about the future. But the local community team reassured him and he was quickly referred to the local prosthetic service supported by the International Red Cross.
It was great to meet him again. He volunteered to help us on an amputee rehab workshop we ran jointly with the Red Cross. He was doing well, coping with reduced vision and hearing and some pain but he was about to get his prosthesis and was having physiotherapy at the centre in preparation.
He seemed really motivated to return to his work as a supervisor in a local iron company. He said work was his hobby. Unemployment is especially high in Gaza, so to see him on the brink of returning was really encouraging, and his resilience humbling.  Mary Jane Cole is a senior lecturer in practice education at Kingston University and St George’s, University of London, and vice chair of BACPAR
Handicap International is an independent aid organisation working in situations of poverty and exclusion, conflict and disaster. The charity works alongside disabled and vulnerable people in more than 60 countries worldwide. For more information, visit  there website here.