Jean Driscoll is passionate about integrating health and social care in order to improve provision for patients in Dundee. Ian A McMillan meets the CSP award winner. 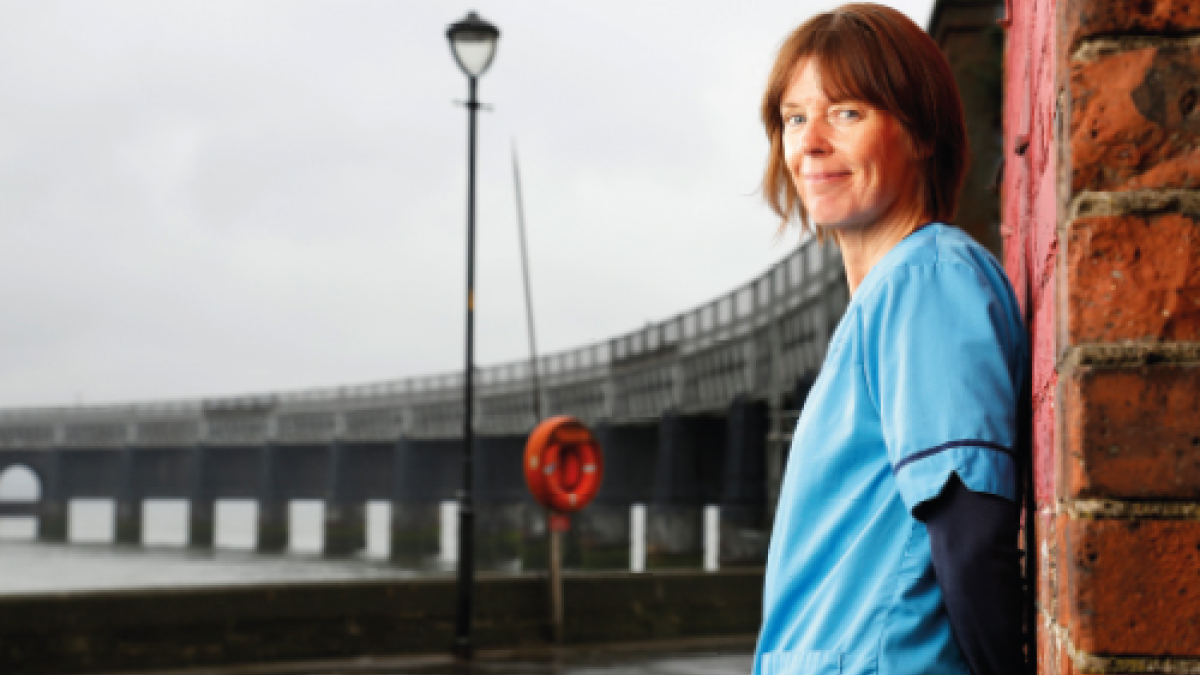 Physiotherapist Jean Driscoll clearly revels in leading the Dundee community rehabilitation team. She manages 23 members of staff: 10 physios, four occupational therapists (OTs) and nine support workers. Team members, who Ms Driscoll says are supportive and enthusiastic, are based at the Kings Cross Health and Community Centre – a mile or so from both Dundee and Dundee United’s football grounds. Originally, King’s Cross was an infectious diseases hospital, equipped with its own bakery.

Last December, Ms Driscoll notched up a career highlight, picking up a CSP excellence award on behalf of her team in London. Her achievements were lauded by a colleague who put her name forward in the awards’ ‘demonstrating integration of health and social care’ category.

‘It’s a lovely environment to work in and I just love my job,’ she said when Frontline visited in March. ‘We are there for each other and let’s say it’s not difficult to come into work. All of us are constantly advancing our skills. As the health service and the world is changing, our service is evolving to meet those demands.’

In recent years the Tayside NHS team’s work has been bolstered by awards from the Change Fund – part of the Scottish government’s Reshaping Care for Older People strategy.

The fund’s aim is to help prevent patients from being admitted or readmitted to hospital and to promote swift discharges.

The team covers the whole of the city of Dundee, reaching out to parts of neighbouring Angus, and Perth and Kinross, Ms Driscoll explains. Dundee, Scotland’s fourth largest city, was once famed for its jute mills (which, interestingly, had a large female workforce as women were cheaper to employ than men). The raw material, imported from India, was processed in Dundee into products such as canvass and twine which were then exported around the world.

The industry and the port gradually declined in the last century as cheaper options became available overseas, triggering widespread industrial decline and unemployment. But optimism is in the air again with a £1 billion overhaul of the former docks area promising to make the city more attractive to tourists and businesses.

In general, the team sees older people (nine patients in 10 are 65-plus) in their own homes. ‘We have aligned our service with social care and have divided Dundee into eight geographical areas, based on electoral wards, each having a physio who “shares” an OT,’ says Ms Driscoll. Despite the team’s size, there is plenty of interaction and camaraderie. ‘Most people start their day’s visits from the centre, return at lunchtime for peer support and come back in the evening before leaving for home. Some visits are done in pairs if, for example, there are safety concerns, and we have systems to ensure that those visiting patients’ homes alone are safe.’

‘Our OTs are co-locating with the social work OTs, which is a huge step forward in terms of integration and I will still line manage them.’ Integration is something of a buzzword at present, and was a key part of the 2015 CSP award, but has a long pedigree in Dundee.

For example, Ms Driscoll’s team has been training care staff in the social services enablement team – which supports older vulnerable people at home – on topics such as delivering gait education and basic exercise programmes for several years.

‘We also do joint visits with them to see how they put it into practice. Because we have skilled them up, it frees us up to spend more time with the more complex patients. They also can go back and do more maintenance with the patients than we, or our support workers, could. It’s all about health promotion and is working well.’

One of the most common conditions in Dundee is chronic pulmonary obstructive disorder (COPD). Among some older patients, there is probably a link to employment in the jute mills. ‘Working with jute wasn’t good for people’s lungs,’ says Ms Driscoll.

But an alarming proportion of the pulmonary team’s patients are in their 30s, Ms Driscoll reveals. ‘There are pockets of deprivation in Dundee and we have higher rates of COPD than many other places. It’s quite frightening how in recent years we are seeing more younger people whose COPD has been triggered by smoking tobacco and other substances.

‘By the time they are referred to us, perhaps by a GP or a counsellor, they will have said they want to do something about that and perhaps made a lifestyle change. We can educate them to self-manage their condition and increase their exercise capacity.’

There is also a falls service and an intermediate care service, the latter based in a unit known as Bluebell. ‘The physiotherapy staff also work at the Kingsbury care centre (a psychiatry of old age centre) and are beginning to get involved at the McKinnon centre for people needing care after being discharged from a local brain injury unit,’ Ms Driscoll explains.

Overall, the community rehab service receives about 3,000 referrals a year, but of course, there are ebbs and flows. ‘In any one week, staff covering one electoral ward areas might have 50 referrals, while another might have 10,’ says Ms Driscoll. But staff are willing to share the burden when colleagues are under pressure. ‘One of the strengths of the team is that we help each other out.’

Though the core staff are fairly stable, there is some churn with Robert Gordon University students coming and going on placements. In addition, physios on rotation from the city’s Ninewells Hospital join the team for stints lasting from six to nine months, depending on their banding. ‘Having this valuable community experience makes them better physios when they go back to the hospital. Their discharge planning will be better, for example,’ says Ms Driscoll.