NHS funding pressures mean physio services are under threat across the country.  What lessons were learned by those who fought against proposed cuts last year?  Mark Gould reports. 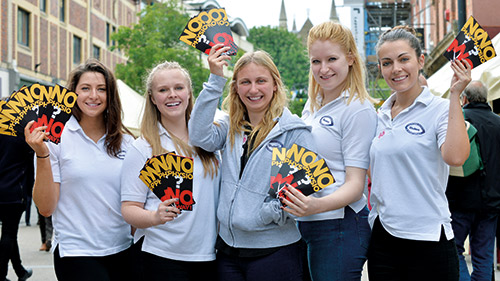 Student physios took to the streets in Worcester to highlight the cuts
Physiotherapists are playing a prominent role in campaigns against cuts to services as managers wrestle with the seemingly unwinnable struggle between rising demand and limited resources.  Physiotherapists have achieved some successes, in areas such as Mid Essex, where proposals to cut outpatient musculoskeletal services were overturned, but NHS services across the country are under renewed, and what can feel like relentless, pressure.
Clinical commissioning groups (CCGs) in Worcestershire and Kent announced last month that they are to slash the number of people eligible for hip and knee replacements. Those who will miss out will be offered extra physiotherapy, which could increase demand on an already stretched service.
Last December 44 health systems covering the whole of England published their five-year sustainability and transformation plans (STPs). The scope of STPs are massive; in many cases they may require radical changes to the way in which services are delivered, and who delivers them. As a result, physiotherapy services may well be affected.
Kevin Dale is the CSP negotiating and organising officer for East of England who helped organised protests against cuts in Mid Essex and Worcestershire. He says there are a number of ways to respond when physiotherapists are concerned that changes could have adverse consequences.  Mr Dale said it’s vital for stewards and CSP members to alert CSP officers when they are aware of any potential threat to physiotherapy services, whether from STP or CCG plans.

He said the Mid Essex campaign worked on two fronts: making the professional arguments for keeping physiotherapy; and campaigning effectively to influence key people.
The CSP commissioned a YouGov survey asking people in Essex what they would do if they were in pain and unable to get a hospital appointment for physiotherapy. ‘The top two answers were (a) go to accident and emergency and (b) go to my GP. With this information, we were able to make the argument that financially it made no sense and that physiotherapy actually saved money,’ Mr Dale said.
CSP members organised a day of action in Chelmsford, using the ‘No physio, No way’ branding created by CSP staff for the campaign. ‘We collected hundreds of signatures, linked with other health groups and distributed a leaflet to GP surgeries, community centres, libraries and cafes. The petition, with a covering letter from CSP chief executive Karen Middleton outlining the support for keeping physiotherapy and the benefits it brings to the NHS, was sent to the CCG.’
In Worcester, the campaign was organised along the same lines, making the professional arguments, attending CCG meetings to make the physiotherapy case and to put questions. Physios linked up with the local trade’s council, which was organising action against the proposed cuts, and the CSP senior negotiating officer, Jim Fahie, made the case for saving physiotherapy at a public meeting.
CSP steward Naomi Morris, who works for Provide, which runs NHS community physiotherapy services in central Essex, helped organise the Mid Essex protest.
‘We arranged a meeting directly with the CCG to discuss the proposals and tried to offer different options that might go some way to achieving the savings they were looking for.
‘We made the case that the latter two options would be a waste of our training and would not be conducive to successful treatment of patients and tried to offer different savings,’ Ms Morris said.
The CSP steward advises using social media – ‘Twitter and Facebook and anywhere else to spread the word’. Ms Morris says: ‘It was important to help publicise the proposals and spread the word regarding the public consultation meetings to maximise attendance and increase public awareness as we found the meetings were not necessarily well advertised.’
Anyone considering talking to the press should speak first with their organisation’s communications manager. ‘Their initial response might be “don’t say anything” but eventually you should be able to negotiate a way around it so you can get your point across while maintaining a corporate, professional stance. You have to present the public with the facts without negative emotion, be honest, be clear and think about the message you want to convey,’ Ms Morris added. Physio staff contacting local media are advised to put together a simple statement setting out their case to minimise the chances of errors or misinterpretation.
Steve Tolan, the CSP’s head of practice, says campaigns show that meaningful solutions are possible when physio staff approach commissioners in the spirit of collaboration.
‘If a commissioner is under intense financial pressure it is something we have to accept – therefore the idea of wanting no change is not an option – we need to think about how we can help produce a solution that suits commissioners and patients. There are no bad guys in these situations so we must move away from that mind-set.’
In Mid Essex, Mr Tolan says physiotherapists were able to demonstrate that by making cuts to physiotherapy there would be unintended consequences that could be more expensive. The aim was to develop evidence-based solutions that would help to achieve the commissioner’s goals.
‘In Worcestershire, the latest proposals for restricting knee and hip replacements will drive more patients to physiotherapy services, so increasing demand. This could have benefits, but could also raise issues for the service.’ fl

If your service is under threat