Physiotherapists based at the edge of London’s East End use a collaborative approach to improve staff health and wellbeing, as Robert Millett discovers. 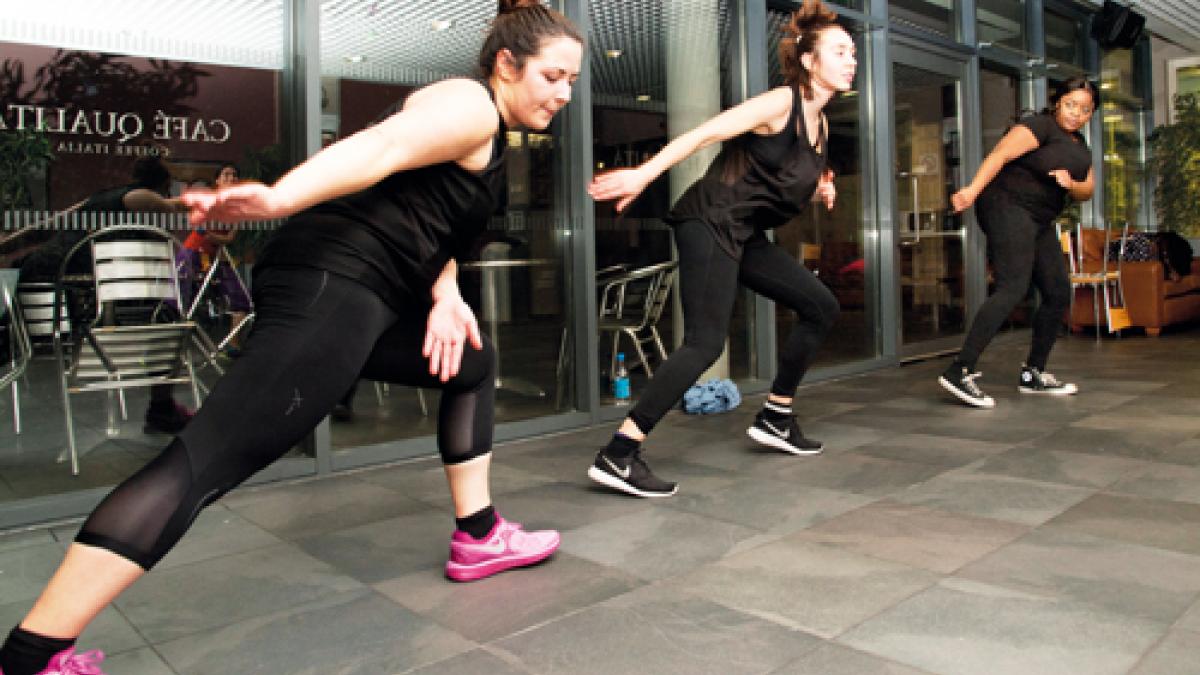 A physiotherapist is improving the health of colleagues  at her trust by collaborating with  other disciplines and forging community  links. Anna Young is a specialist bariatric physiotherapist at Homerton Hospital, part of Homerton University Hospital NHS Trust, in Hackney, east London.

In her main role, she supports patients who are preparing for, and recovering from, bariatric surgery. But alongside her day-to-day duties, Ms Young also acts as a healthy workplace champion and leads an innovative, multidisciplinary group that strives to increase the health and wellbeing of staff.

Ms Young explains that the trust employs almost 4,000 staff, working at the main hospital site and more than 70 community locations. There are no dedicated health and wellbeing staff and no allocated budget for promoting staff health, she says.

Yet, despite these limitations, the trust managed to obtain an Achievement award from the London Healthy Workplace Charter last March and it gained the charter’s Excellence award last month.

The origins of this success story lie in 2013 when Ms Young volunteered to join the hospital’s Move for Health team. Shortly afterwards, she became the lead for health and wellbeing events at the trust.

‘I took on a small group of volunteer physios who held annual Workout at Work days and occasional health stalls,’ she says. ‘They help organise all our events, willingly give up their lunch times and spare time to make posters, contact people and do whatever’s needed.’

Ms Young enlisted the help of the trust’s communication team to promote activities through the staff magazine, and set up an intranet page and Twitter account.

In addition, soon after taking on the role Ms Young teamed up with the trust’s staff experience lead Margaret Bingham-Crisp.

‘Margaret was doing a lot around staff benefits so I asked “Why don’t we combine our forces and come up with some new ideas?”’ she explains.

Ms Young and Mrs Bingham-Crisp organised the trust’s inaugural health and wellbeing day and invited a range of departments and health professionals to take part.
‘The cardiology team, dieticians, stop smoking service and library team all participated,’ says Ms Young. ‘And we  invited local community health services, the council and their public health team, representatives from local leisure centres, the library, a local gardening scheme and a social enterprise cafe.’
Stands provided information on topics such as physical activity, local exercise classes, healthy eating, smoking cessation and weight loss. Staff received free health checks and taster sessions of massage, reflexology, Zumba dancing and Pilates.
‘We managed to get more than 200 members of staff to come,’ says Ms Young. ‘And because we had combined forces it wasn’t seen as just a physio thing – using all the health promotion resources at the Homerton helped us to reach out to all the different staff groups.’

Following the successful event Ms Young and Mrs Bingham-Crisp invited more collaborators to join them and established the Healthy Homerton core group. Group members include a non-executive director, an associate director of workforce as well as staff members from departments such as catering, communications, facilities, dietetics and physiotherapy.
Since being formed, the group has organised a range of events for staff: wellbeing, exercise and mindfulness sessions as well as Schwartz rounds (evidence-based forums where staff discuss some of the emotional and social challenges of caring for patients and offer mutual support).
Members have also lobbied successfully for their health and wellbeing agenda to be prioritised in the trust’s annual quality account for 2015-16. And Healthy Homerton has now been recognised as being a key part of the trust’s staff benefits ‘brand’.
Improvements have also been triggered by the group’s successful bid to gain the London Healthy Workplace Charter award, says Mrs Bingham-Crisp.
‘The charter helped us see where the gaps were,’ says Ms Young ‘Mental health and substance abuse were probably our two weakest areas – so it was great to identify that. As a result, our employee health department is now supporting and writing up a new mental health policy, new guidelines and a great referral pathway.’
The group has met a local community group focusing on alcohol awareness and liaised with substance abuse organisations. ‘We are also setting up meetings with a training provider so that we can get 16 managers and team leaders trained as mental health first aiders,’ says Mrs Bingham-Crisp.

The team follows up every event with questionnaires and receives feedback from the national annual staff survey reports.
‘The survey shows that since the Healthy Homerton group started there has been a significant move towards more people saying “Yes, the trust does look after my health and wellbeing”,’ explains Mrs Bingham-Crisp.
‘We also get feedback from staff directly,’ says Ms Young. ‘People come to us at events and say “You measured my body mass index last time and afterwards I started going to the gym, I changed my diet and now I’ve lost weight” so it’s really encouraging to hear those stories.’
Ms Young believes other physios who are interested in spearheading similar initiatives in their workplaces should just ‘go for it’. ‘Don’t be afraid to just get going with ideas,’ she says.
‘Get as many people helping you as possible. There are probably other departments running education or information sessions for services users, so join forces and arrange for the information to be available for staff as well.’

Make the most of free information

One tip is make the most of resources and free public health information. ‘Get in contact with local public health teams as they have all the information about health and wellbeing services in your area,’ she says.
The Healthy Homerton group hopes to extend its approach into the national ‘making every contact count’ agenda, to benefit staff and patients.
‘If you are giving your patient a few exercises to do then why not address some of their other health issues as well, by signposting them to local services,’ says Ms Young. Ultimately, the group hopes to gather evidence that demonstrates that improving staff health directly benefits patients. ‘It’s common sense, really,’ says Ms Young.
‘If you want to provide a good service and care for patients then you need your staff to be healthy.’

Jocelyn Walder, an infant feeding specialist midwife, will have clocked up 30 years at the Homerton by 2017. Eight years ago she developed acute disseminated encephalomyelitis (an autoimmune disease), and became paralysed from the neck down. After six months in hospital she returned to work in a wheelchair and unable to stand.
The Healthy Homerton team helped Ms Walder with exercises and made her aware of community services she could access.
‘That’s the most important thing of all – just knowing,’ she says. ‘Because there are little pockets of services out there, but if you don’t know exactly what’s available then you can’t access them.’
Ms Walder became involved with Ability Bow, a specialised gym. ‘The instructors are all specially trained and the equipment is designed for people with disabilities,’ she explains.
Ms Walder is now able to use a Zimmer frame and her speed of movement and fluency continues to improve. ‘I’m very lucky that work has continued to support me with flexibility for hospital appointments, and I’ve been able to adjust work hours to make exercising possible.’

Last year the team organised a six-week step challenge, involving 34 staff teams. ‘More than 200 people signed up and I think the appeal was that people realised it was very simple,’ says Mrs Bingham-Crisp. ‘People could just make small changes to get involved, by getting off the bus a stop early or by just going for a walk at the weekend, for example.’
The winning team’s prize was takling part in an experience day at the Lee Valley Lee Valley White Water Centre in Waltham Cross, Hertfordshire, which Ms Young arranged.
‘I talked them into offering a few experiences for our winners – and as a thank you we said we would promote their services around our trust,’ she says.