Sometimes patients don’t realise they have become dependent on drugs prescribed in primary care. Robert Millett talks to two physiotherapists about the hazards. 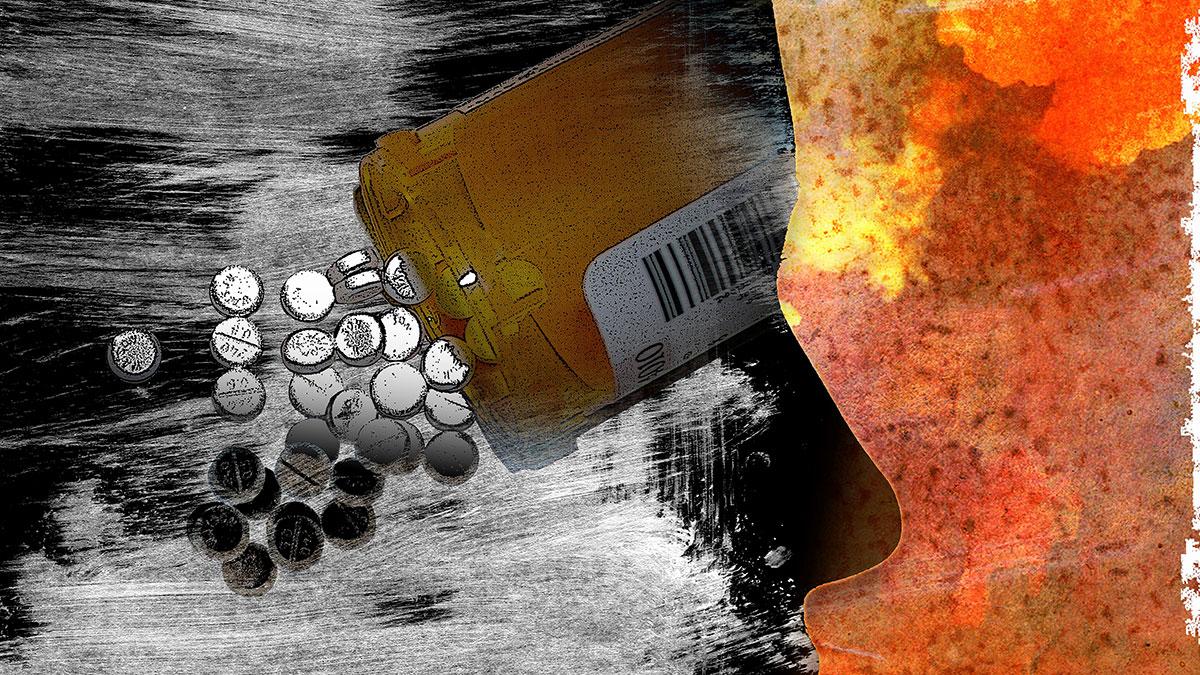 One in 11 patients in England was prescribed a potentially addictive drug last year. The figures, published in a report by the Public Health Research Consortium, add to growing concerns about the risk of prescription drug addiction. In response, Public Health England (PHE) has launched a review to examine issues of dependency and withdrawal in relation to these medicines.
CSP professional adviser Pip White says the one-year review, which began in January, focuses on medicines frequently prescribed in primary care settings, such as benzodiazepines, anti-depressants and opioid painkillers.
The aim is to examine how prescribed medicine addiction may be affecting people with conditions such as anxiety, insomnia, depression and non-cancer related pain.
Ms White says physiotherapists who are annotated with the Health and Care Professions Council as prescribers are likely to use some of the under-review medicines with their patients, especially those related to pain control and spasticity management.
‘There are around 700 supplementary and independent prescribers compared with hundreds of thousands of nurses and doctors who can prescribe,’ she says. ‘And not all physio prescribers will prescribe these medicines, so physio prescribing will have a very small impact overall in the total number of prescriptions for these medicines.’
However, she adds that prescription medicine addiction is an issue that all physiotherapists should be aware of, not just those with independent prescribing rights.
‘As all these drugs act centrally on the brain, there is a risk of dependence and tolerance with prolonged use, which means patients might not be able to stop taking them easily and/or need a greater dose of the medicine over time to get the same effect.’

Awareness of the risks

Dave Baker, an extended scope physiotherapist based in London, has been a supplementary prescriber for 10 years and became an independent prescriber in 2014. He agrees that all physios should be mindful about the potential for addiction, especially in relation to opioids.
‘A lot of physiotherapists may be well placed to flag up these types of issue,’ he says.
‘But many may not be considering this issue when they talk to patients, or may not feel confident about broaching the topic. So I think there is a need to raise awareness and highlight potential opportunities to help and support our patients.’
Mr Baker says physios can help to identify behaviours that might indicate a patient is at risk. He suggests good communication is key. ‘Just ask patients about the medicines they use, how they came to be on them and whether they still require them,’ he says.
‘It could be as simple as saying “Do you feel you still need this medication?” or “Shall we talk to your GP about starting to reduce the medication?”
‘People are generally open about it and often feel this is an area they don’t get an opportunity to discuss. Sometimes they are taking medication they no longer need. Or they may tell you about medicine over-usage, and you can advise them about safe and appropriate usage.’
From his own experience, Mr Baker has found that a range of factors can lead to patients, knowingly or not, misusing their medication. ‘People don’t always recognise the signs of addiction or realise they are potentially becoming addicted,’ he says.
‘Sometimes it’s not until they discuss medicine usage, or someone suggests the possibility of reducing their dose, that they show reluctance to do so and start to become aware that they have developed dependency issues.’
He also says that when a patient appears to be misusing or abusing medication, physios need to be aware of their local policies and guidelines, which should detail how such information may be passed on and the potential services to which patients can be referred.
‘Accessing appropriate support may mean liaising with a patient’s GP and local specialist services that have knowledge or experience of addiction.’

While the PHE review is taking place, NHS England plans to conduct an unrelated public consultation, this summer, about the list of controlled drugs physiotherapists can prescribe. ‘There are limitations in place on which controlled drugs physio prescribers can use, and the CSP is working with NHS England to review this list,’ says Ms White, its professional adviser.
‘While separate to the PHE review, this work will include some of the medicines within the PHE review that physiotherapists can’t currently prescribe independently, such as Tramadol.’
In addition, the Home Office and the Medicines and Healthcare Products Regulatory Agency are reviewing whether they should reclassify gabapentin and pregabalin (GABA-ergic medicines) as controlled drugs, due to their increasing recreational misuse and abuse. Physiotherapy prescribers can currently prescribe these two drugs, and both medicines are included in the PHE review.
However, Ms White says it is unlikely the PHE review will affect what physiotherapists can prescribe, although it may affect how the medicines are used and how patients who take them are managed. ‘If medicines are reclassified as controlled drugs then they can only be independently prescribed if they are added to the restricted list, which physios can prescribe from,’ she says.
‘However, if a medicine is not on the restricted list, a physiotherapist prescriber can still prescribe it if they work within a written clinical management plan as a supplementary prescriber.’
She adds that, as clinical evidence develops, the CSP expects physiotherapists to update their prescribing practice to ensure they continue to use all medicines safely. This should include considering de-prescribing strategies, to help reduce the use of medicines known to cause dependence with prolonged use and ensuring that prescribing is in line with published clinical best practice.
The PHE review, which is due to report its findings in 2019, aims to collect evidence about the nature and likely causes of dependence among people who take prescription medicines, as well as examine effective prevention and treatment approaches for each drug category.