Physiotherapists are coming up with inspiring ways to tackle COPD, which affects at least 1.2 million people in the UK – a sharp rise over the last 10 years. Gill Hitchcock reports. 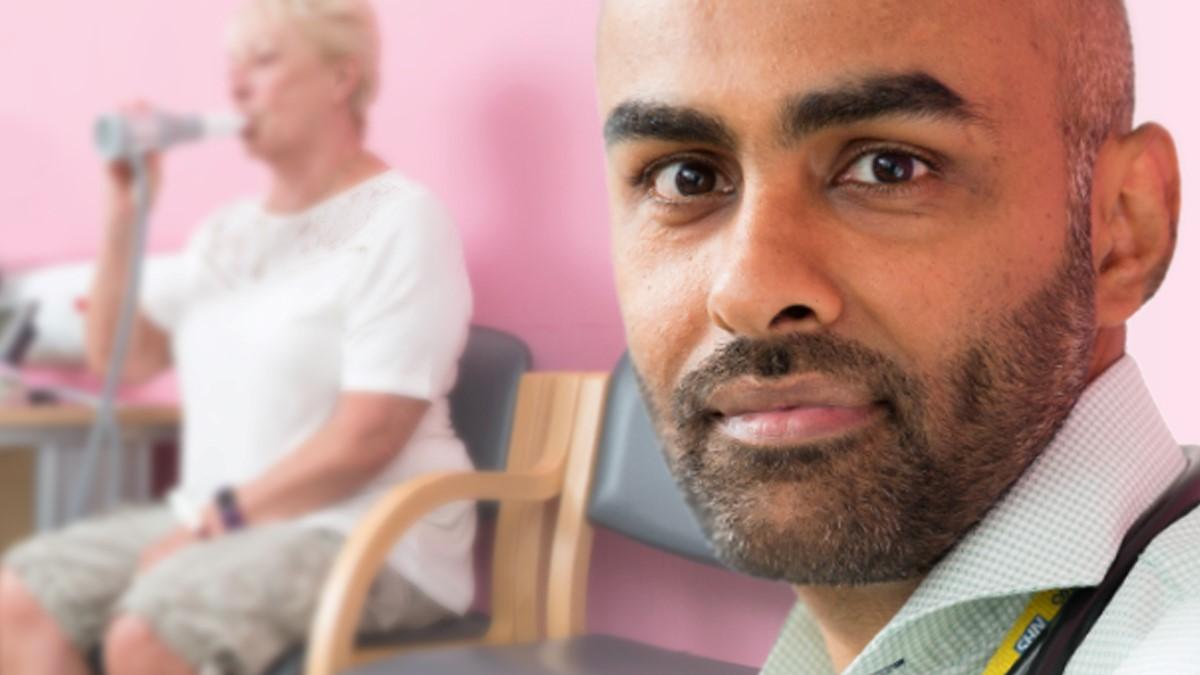 The beauty of this clinic is that you catch people early. You have a window of opportunity to make a difference, Manish Chatterjee says. In the London borough of Greenwich, the NHS clinic diagnoses chronic obstructive pulmonary disease, or COPD – the second most common lung disease after asthma in the UK. And the work done there is making a positive impact.
Since it was fully launched in 2016, in hospitals across the borough, Mr Chatterjee has been the senior clinician. A physiotherapist specialising in respiratory care and an independent prescriber, he sees people aged 35 and over, referred by GPs. All have symptoms of COPD, a group of lung conditions including bronchitis and emphysema, which make it difficult to empty the lungs of air because airways are narrowed.
Across the UK, 1.2 million people are living with diagnosed COPD, says the British Lung Foundation. This means that two per cent of the population – four-and-a-half per cent of everyone aged over 40 – have the condition. What’s more, the problem is growing.
The number of people with a diagnosis has increased by 27 per cent in the last decade, from below 1,600 to nearly 2,000 per 100,000, the foundation has found.
This could mean more undiagnosed cases are being found, or that the disease is becoming more common. Changes in record keeping could be a factor. However, prevalence increased by nine per cent between 2008 and 2012, while record-keeping practices remained the same.

The charity believes that millions of people across the UK have COPD and don’t know. They are simply struggling with their symptoms and a lower quality of life. Because they are not receiving treatment, their condition is progressing quickly.
In Greenwich, Mr Chatterjee says he developed and set up the clinic because he has a special interest in diagnostics and medicine management for COPD and asthma. Since 2010, he has been accredited by the Association for Respiratory Technology and Physiology. ‘The patients I see have a lung function test, known as spirometry, and a full respiratory assessment. The findings and diagnosis are discussed with our respiratory consultant, Karnan Satkunam.’
Certainly, Dr Satkunam is happy with this way of doing things. He says it allows his hospital, the Queen Elizabeth in Woolwich, to function more effectively. This is because the COPD clinic is able not only to diagnose, but to advise and treat patients. Only those who really need to see him are referred on to his consulting room.
On Mondays and Thursdays, Mr Chatterjee sees patients for up to an hour each. ‘Depending on the assessment, if the patient has COPD, perhaps has frequent infections and is struggling, then we would accept them on  to the COPD team’s caseload for ongoing care,’ he says.
‘Then there is a cohort of patients who don’t exacerbate much, but are smokers. So I refer them to the smoking cessation service. In addition, if they use inhalers I may titrate their inhaler therapy.’

An analysis of the service shows high attendance: 93 per cent of patients turn up for appointments. Of those, 40 per cent are diagnosed with COPD. The rest include a significant number of people with asthma and a small number who have been inappropriately referred.
What Mr Chatterjee really likes about the clinic is its ability to intervene early with education, not just about quitting cigarettes but physical activity too. He sees it as a ‘perfect opportunity’ to prevent lung deterioration, rather than treating people when their lung function is difficult to manage and there are huge cost implications for the NHS.
A report on COPD, published in April by the Royal College of Physicians, points to pulmonary rehabilitation – an exercise programme and advice on managing the condition – as one of the most effective interventions. Where necessary, Mr Chatterjee refers his patients to such a service provided by the Greenwich COPD team. This means a seven-week course of twice-weekly education and exercise sessions which, for some people, is a big commitment.
He says: ‘I had a patient in clinic today who said she couldn’t go for pulmonary rehabilitation because it was too early – the programme starts at 11am. And, believe it or not, it’s only 100 metres from her house. So I said, fair enough, but how about we give you a DVD and then we can send someone to your home and monitor you?
‘It’s all about seeing the problem from the patient’s perspective and trying to find a solution. At the end of the day it’s how you promote this, so to speak.’

Meanwhile, the Royal College of Physicians says there are other significant problems with pulmonary rehabilitation. One is under-referral, another that a large number of patients (40 per cent) do not complete treatment. ‘I feel that transport, accessibility and motivation are key factors that affect and influence attendance rates for pulmonary rehab,’ says Mr Chatterjee. ‘Our service is offered at two centres, both of which are central and easily reached by our population.
‘We need to promote this as a physical activity programme specially designed for people who have a lung disease and feel short of breath. Some may be better, some may be worse, but the issues will be the same.’

There is another way to do this too. BreathingSpace, a community service based at Rotherham NHS Trust for people with respiratory conditions, came up with the simple but effective idea of a leaflet. It gives patients a comprehensive explanation of pulmonary rehabilitation.
The catalyst was an audit in 2015 showing that 11 per cent of BreathingSpace patients didn’t enrol for pulmonary rehabilitation after their assessment. The primary reason was simple: they were unaware of what pulmonary rehabilitation was all about. However, a second audit in 2017, after the leaflet had been distributed throughout the trust area, showed the figure had dropped to two per cent.
Kate Martin, physiotherapist and therapy team lead for BreathingSpace, says: ‘We recognised that people didn’t really know what they were letting themselves in for. They were turning up for a pulmonary rehabilitation assessment not knowing what it would involve. By providing people with a leaflet beforehand, the uptake became a lot better.’
She says the leaflet isn’t distributed outside the trust, but her team is considering making it available through GP surgeries. Her advice for other pulmonary rehabilitation services is: ‘Take all the steps you can to make sure patients have a good understanding of what to expect’.
Meanwhile, the Greenwich clinic may be a victim of its own success. It is oversubscribed and, as a consequence, waiting times are now eight to 10 weeks when they used to be four to six weeks, Mr Chatterjee says.
It is no surprise that Dr Satkunam would like to see its capacity increased.
‘This clinic is extremely valuable in terms of Quality Improvement Project criteria’, says Mr Chatterjee. ‘It is very cost effective. I have been fortunate to work with consultants who have been very proactive in promoting this. And now they are reaping the fruits.’