Physiotherapists are ideally placed to reduce the long wait – often years – for a diagnosisof acetabular hip dysplasia. This would improve quality of life and the outcome for patients, says Liz Evans. 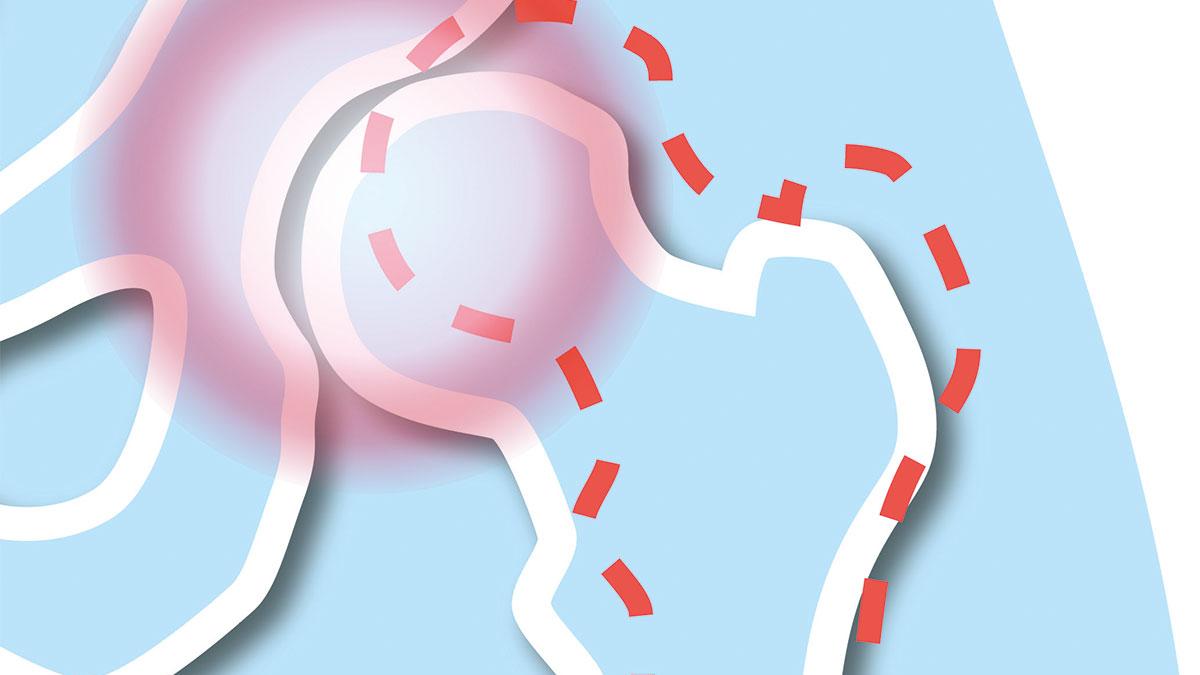 Although well recognised in infants, when it is known as developmental dysplasia of the hip, hip dysplasia in adolescents and young adults is poorly understood. This treatable condition is commonly referred to as acetabular hip dysplasia (AHD) because it is identified in the mature or near mature skeleton by a shallow, sometimes poorly oriented acetabulum (Troelsen 2012). The abnormal biomechanics this causes leads to disabling hip pain and dysfunction, which rapidly develops into premature, secondary osteoarthritis (OA). The problem is that poor recognition leads to delayed or misdiagnosis of AHD and the consequences can be devastating for the patient.
Acetabular hip dysplasia leading to premature, secondary osteoarthritis (OA) means that, shockingly, people as young as 18 may lose their native joint to total hip replacement (THR). The associations of THR with older people and the limited activity THR causes, means that young people are understandably devastated by the prospect.
Alternatively, when hip dysplasia is recognised early, joint-retaining, corrective surgery known as periacetabular osteotomy (PAO) is often the surgery of choice. This is highly specialised surgery carried out only by a select and very limited number of surgeons in the UK.
It is essential for a successful outcome that PAO is implemented before the joint degenerates into OA (Steppacher et al 2008) and when the joint remains congruent. Early diagnosis is vital but as Clohisy et al (2008) highlight, there are deficiencies in the quality of diagnostic evaluation in pre-arthritic hip disease. While this point was made some 10 years ago at the American Orthopedic Association’s 2008 Orthopedic Forum, little has changed since.
However, physiotherapists who carry out standard hip assessments are well placed to raise relevant questions when patients present with initial hip pain and to improve the diagnostic opportunities for these patients by providing early referral for x-ray and to a specialist PAO hip surgeon.

Throughout the medical literature, AHD is the subject of a great deal of research. The focus for decades has been the reliability of x-ray diagnostic measures and the development of surgical methods. This research has improved surgical treatments and much of it emphasises the need for accelerated recognition of the condition to facilitate early intervention, in order to maximise PAO surgical outcomes. The problem is that because of the young age and, often, high activity level of patients presenting with initial hip pain, the clinicians they consult typically assume a diagnosis of femeroacetabular impingement (FAI) or provide treatment for a variety of soft tissue injuries. This means that dysplasia can be overlooked. Improved awareness to increase the index of suspicion for AHD when appropriate, is required and the indications for x-ray need to be recognised and promoted.
Promoting early recognition of AHD requires the provision, for clinicians, of a clear clinical picture of the physical presentation of the condition. Yet establishing this clinical picture of AHD is challenging. AHD can be seen as a wide spectrum of features. For instance, not only can first symptoms present within a wide age range (12-50 years), but the factors that trigger them vary widely, according to the individual’s activity level and predisposition. It has therefore been recognised that research is required to establish regularly occurring features on which clinicians can gauge their index of suspicion for x-ray referral and definitive diagnosis.
Due to the poor record of accurate diagnosis for AHD, estimating the incidence is difficult. As Pun’s 2016 review highlights, reports indicate a range in the general population of 1.7-20 per cent but her review points to various studies that find an incidence of 3-5 per cent (Jacobsen & Sonne-Holm 2005; Jacobsen et al 2005; Gosvig et al 2010; Ortiz-Neira et al 2012; Engesaeter et al 2013, cited in Pun 2016).
More confidently recognised is that in patients undergoing total hip replacement before the age of 40, more than 25 per cent were due to underlying hip dysplasia (Engesaeter 2011). In a study of 311 subjects with either DDH of infancy (n=102) or AHD (n=209), bilateral AHD occurred in approximately 60 per cent of patients with young adult onset, less than 20 per cent of sufferers having left hip involvement only (Lee et al 2013). In the whole subject cohort, more than 90 per cent were female and over half had first degree relatives with a history of early hip disease.

Our Young People’s Hip Conditions research hub has collected more than 200 patient stories, currently undergoing analysis. The impression so far is that there are recurring patterns, ranging from unpredictable onset of incapacitating symptoms through to insidious declines in function, with patients feeling they have to accept a consistently diminishing quality of life. Patient histories show a strong family link with early hip disease, frequent memories of non-specific hip ‘niggles’ throughout childhood or adolescence and a high sporting activity profile.
Overwhelmingly, the picture that emerges is the painful experience endured in the search for an accurate diagnosis. Frequently these highly motivated individuals are inventive, persistent and determined in their mission. Furthermore, when diagnosis is finally forthcoming, patients’ problems persist. In 2011, Gambling and Long carried out a study to explore the experiences of five young women adjusting to the diagnosis of hip dysplasia. The study recognised two major evolving concepts among these young women: first, that their diagnosis challenged the way they viewed themselves and questioned their identity as a young women; second, as the women grew to understand the long-term implications of their diagnosis, they began a major quest to save their native joint.
Hence we return to the vital need for early recognition and relevant referral to a PAO surgeon. At Cardiff University, we have set up a multidisciplinary research hub, which includes patient groups, with patients taking direct and active roles in our research. We are linked to surgeon groups, the International Hip Dysplasia Institute, the Steps charity and DDH UK, in our determination to break new ground in this life-changing condition. We welcome new members to our group.
Liz Evans is a senior lecturer in physiotherapy at Cardiff University. See Three Minutes for a personal story.