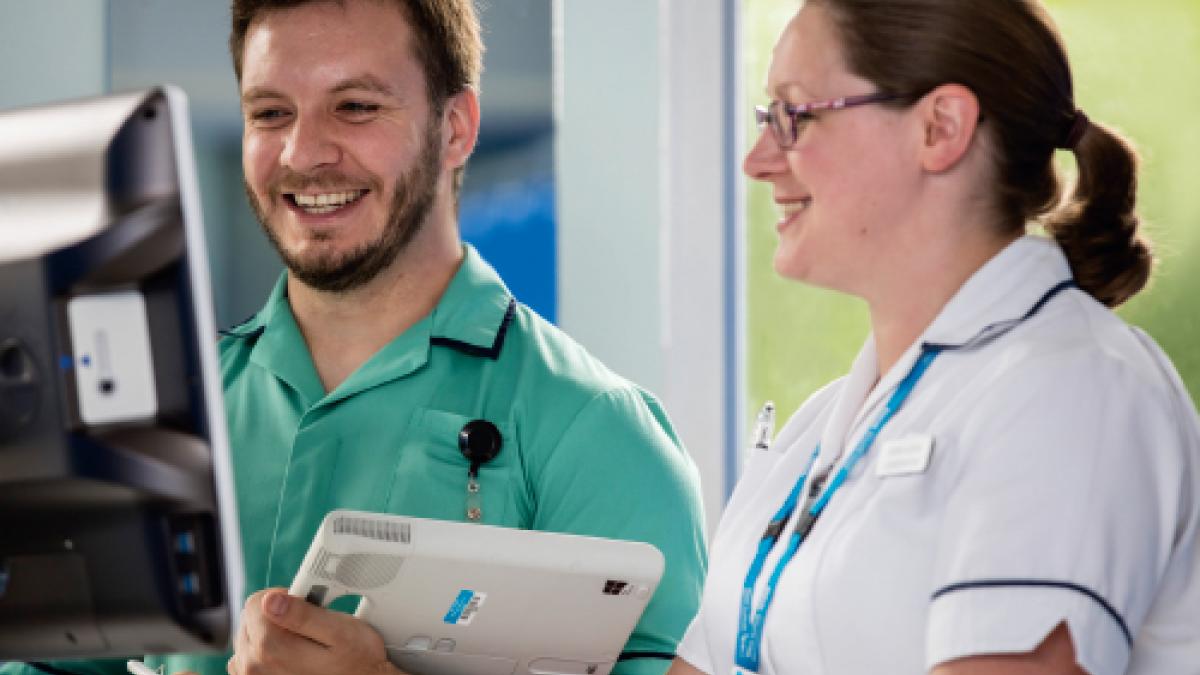 Sarah Judge is considering her professional future. After 16 years at West Suffolk Hospital, 13 of them in trauma and orthopaedics, the clinical specialist physiotherapist could make a permanent leap to healthcare technology. It seems a stark choice, but her decision will follow a path spanning clinical and IT work that began in 2014.

It was the year West Suffolk – ‘a small hospital with quite grand ambitions,’ as she describes it – started e-Care, a £19 million electronic patient record (EPR) programme. And it was when a number of clinicians were seconded to the project, with Ms Judge as the allied health professions (AHP) lead.

‘IT have poached me,’ she says. ‘I’m on a secondment to the IT department as one of their advising clinicians. Officially, we’re called the clinical support team. Rather than having an IT department and then clinical staff who are using e-Care, we are bridging the gap between the two.’

e-Care went live in May, replacing West Suffolk NHS Trust’s 20-year-old patient administration system, an unsupported mission-critical software system at the end of its lifespan. Now the emergency department is paperless; e-prescribing operates across the trust and all observations and clinical notes are recorded electronically.

Dermot O’Riordan, West Suffolk’s chief clinical information officer, says the EPR was never just about IT. Rather, this is a clinical change project that relies on clinician involvement from the outset, and having an allied health professional (AHP) on board has made a huge difference.

‘We’ve gone live and there are always problems, but there have been no disasters,’ he says. ‘And there haven’t been any issues with the AHPs, because Sarah was involved. She ensured they were listened to, their needs were catered for and they were properly trained.

‘Sarah has become an expert in the system. She knows how it works and what she’s talking about. And that’s been respected across the organisation.’

Currently working full time on e-Care, in August 2014 Ms Judge faced the uneasy task of combining two jobs: in physiotherapy and technology. ‘It was a bit of a challenge, because you want to do both as well as possible, and actually sometimes it’s quite hard to concentrate on both at the same.

‘But I like a challenge, to push myself. And I think it’s good to take ourselves out of what we know and trust, especially if it’s something big which is going to change to our professional lives. I would rather be involved and have a say, than let other professions decide what we do.’

How does Rose Finch, West Suffolk’s professional lead for physiotherapy, think her team of 43 whole-time equivalent physios is benefiting from Ms Judge’s input? ‘It’s been very significant and means we have a really professional, knowledgeable, constructive voice at the table. Without that, I think it would have been a doctors and nurses thing, without a doubt.’

The intended provision for physios and other AHPs looked primitive. Ms Judge describes it as a blank electronic page into which physios could record interventions. Plans for anything more sophisticated were not expected for up to 18 months after the official launch.

‘What I have been able to do is to push for us to have more than just the basics, so we can do our job to the highest standard,’ says Ms Judge. ‘So looking at creating specialist templates and different assessment templates. We created before these before e-Care went live.

‘And a big piece of work was pulling in all the different assessment forms and paper forms and working out the best way to recreate them in an easy-to-use electronic format.

‘Physiotherapy had probably 40 or 50, so it was a case of going to the different specialties and teams and saying “We have all these, but what’s the best way to use them in future? Do we need them? Can we adapt them?” ’

The result is that physios have 15 readily-available electronic templates, plus a degree of functionality so they can recreate or tailor them. But that’s just the start. e-Care is a 10-year programme with ambitious plans, including giving community physios, GPs, neighbouring Addenbrooke’s and Papworth hospitals, as well as patients, access to the hospital e-record.

Over the coming 12 months West Suffolk’s physios will be consulted about further improvements. ‘For example, there’s a standard physiotherapy assessment template provided in the system by Cerner, which does a little bit of everything, but nothing in great detail,’ says Ms Judge.

One of the initial benefits of e-Care, according to Ms Judge, is as simple but significant as notes being legible. And because healthcare professionals find it easier to type than write notes, ‘fuller clerking’ of assessments when people are admitted can help physiotherapists with their treatment of patients.

Ms Judge talks about the system having built-in ‘safeguards’ to ensure tasks are done at the right times. ‘For example, every inpatient should have a venous thromboembolism and a rhesus status assessment shortly after admission. So these are going to be done in a timely fashion, which makes the patient’s stay safer.’

If an inpatient’s initial screening indicates they have a high risk of falling, the system automatically tasks a falls assessment to the physios or occupational therapists.

Physiotherapy lead Ms Finch believes there is a tendency for large organisations to marginalise AHPs, but that it is vital they are at the forefront of digital programmes. ‘IT systems should work for us, not hinder us or be a bolt-on. The other thing is that our emerging workforce, the one coming out of university, is much more tech savvy.’

Meanwhile, Ms Judge’s IT secondment runs until 2017. Will she stick with technology, or return to the clinic? ‘That’s the six-million-dollar question. I honestly don’t know. I do miss seeing my patients, but this is a different way of helping them.’