BBC presenter Andrew Marr talks to Lynn Eaton about his physio experiences after having a stroke aged 53. 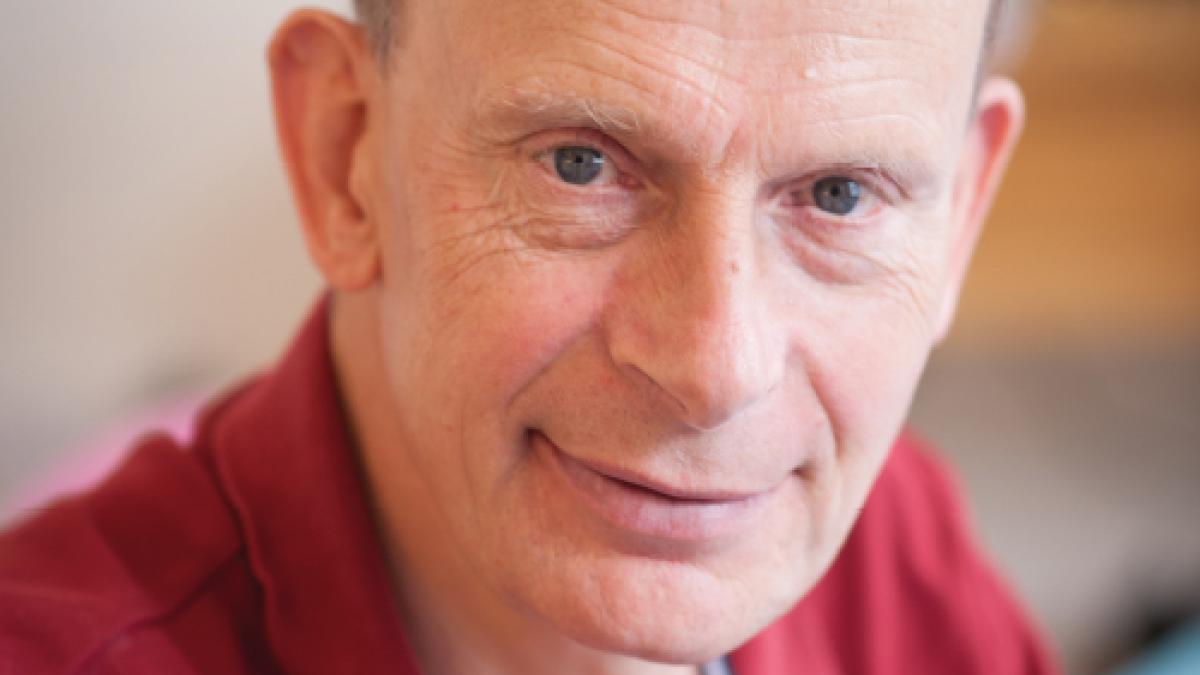 Building a good relationship with your patient is key to their recovery, as any physio knows. But what about when your patient is someone who is constantly in the public eye?
That’s the challenge for Jo Tuckey, from North London Neuro Physio, who has TV presenter Andrew Marr as one of her patients. ‘I will watch his programme, but will look at his posture or what his arm look likes. And I know full well he can turn round and his balance is much better when he’s not stressed because he is on live TV.’
Andrew had his stroke nearly four years ago, in January 2013, at the age of 53. Jo has been his physio since October 2013, initially seeing him three times a week during gaps in his gruelling broadcasting schedule. The input is paying off: ‘When I started working with Andrew,’ she says, ‘he was having some falls and was more self-conscious.’ But things are very different now. He manages several flights of stairs in his north London home, walks across Primrose Hill to the BBC and is back exercising in the gym.
Andrew is one of 152,000 people who have a stroke in the UK each year, of whom one in four is of working age. For him, being in the public eye is a mixed blessing. ‘You are always aware of being watched,’ he says. ‘But on the positive side, lots of people come up and say “well done”.’ He had a dissection to the carotid artery, affecting the movement to the left side of the body. Although he can walk, he still has limited movement in his left leg and left arm and his smile is a little lopsided.
Before the stroke, Andrew had been a keen long distance runner into his late 40s and had completed the Amsterdam marathon (in 3 hours 53 minutes). In fact, it was a running injury, a snapped Achilles tendon, that gave him his first experience of physiotherapy. But his knees deteriorated so badly he had to stop running. Instead, he opted for short bursts of intensive exercise.
‘I was under a huge amount of pressure and I wasn’t taking the kind of exercise I was used to. So we got a rowing machine in the house and I absolutely caned it on the machine.’ That’s when the first stroke happened. Andrew believes he had another after being given clot-busting drugs in hospital, which he thinks caused a life-threatening bleed on the brain. Andrew spent nearly eight weeks in Charing Cross Hospital in west London, first on the hyper-acute stroke unit and then on a general stroke unit. ‘The NHS care was wonderful and the nurses and physiotherapists were fantastic. I was out of bed and in the gym very early on.’

But the first physio he saw after his stroke put him right about the intensive rowing. ‘I was trying to do five miles in 20 minutes at the top gearing. She said that would be tough for a 20-year-old professional rower. “For a man of your age,” she said, “it was clinically insane”. ’ When Andrew returned to Richmond, where he then lived, the intensive physio he’d had in hospital wasn’t so readily available.
‘We are absolutely brilliant at saving people’s lives from stroke but we are not good in saving people’s quality of life after a stroke. I realised that if I was going to make any improvements, I needed more physiotherapy than the NHS system was going to provide.’ Initially, Andrew had private physio in Richmond three times a week. Once he moved to north London, to be nearer work, he continued that level of engagement, but with Jo. ‘That intensity of physiotherapy was only available privately,’ says Jo, who qualified as a physio in 1990, then specialised in neuro-physio in the NHS.
A member of the Association of Chartered Physiotherapists in Neurology (ACPIN) professional network and its former chair, Jo set up her own physio company in 2012. ‘I see the gap, at this later stage, where people frequently say I just feel abandoned. Is this it?’
Andrew knows he is fortunate. ‘Others are less lucky and don’t have the money to spend on [additional physio]. But if 50 per cent of the people of working age with strokes were able to get back to work and paying taxes, rather than receiving benefit for the rest of their lives, think of the effect on the welfare budget.’

So what’s his own recent rehab been like? Apart from the intensity, the regime is not especially different from anyone else’s, says Jo. Andrew enthusiastically picks up the story: ‘When I first saw Jo I was walking very, very slowly and with a stick. We spent a lot of time breaking down the issues with my walking. Are the abductor muscles strong enough? Do I need to do more with my hamstrings?’ He has no voluntary ankle movement on the left, so his foot drops badly. He now wears a very lightweight ankle foot orthosis, which Jo recommended. Andrew has also seen improvement to the subluxaton (droop) of his shoulder. He has finger flexion and is getting a tiny bit of voluntary finger extension.
With plans to cut down on physio supervision and do more rehab on his own, Jo has been accompanying Andrew to a local gym, offering advice on what he can do safely. He had hated gyms but now plans to go three times a week. He’s using the stepper, treadmill and – very, very gently – the rower. ‘I’m a reformed character.’
Andrew also has a trainer, who advocates using intense weights to build and strengthen muscle. He supports Action on Rehabilitation for Neurological Injuries. The charity can provide specialist trainers and this, he believes, can complement physio provision. For those of us more used to seeing Andrew interrogating a high-profile politician or presenting a hard-hitting documentary, there is another, gentler side to him. His Twitter handle describes him as an ‘elderly amateur painter’ first, then a ‘presenter’. He even considered going to art college.
Andrew is an optimist, someone who adapts and survives. Rather than mope because he can no longer paint landscapes outdoors, something he loved pre-stroke, he’s opted for a studio and painting abstracts. The studio is his relaxation: ‘I come back feeling great. It’s certainly good for the inside of my head.’
Andrew is also realistic about how full a recovery he can make. ‘I have a good life, I can work well, I can follow my hobbies. I can get on to the tube, get up and down stairs.
‘However, am I going to get my full range of movement back in my ankle and in my hand and fingers? There is a possibility the answer is “no”.’ He talks instead of the joy of walking, of being on Hampstead Heath with his 21-year-old daughter in the late summer sunshine and looking at the deep blue sky rather than his feet. ’I was able enjoy it, without having to think “another step another step”, or feeling frightened,’ he smiles, with genuine delight.
So, what of that all important relationship between physio and patient? ‘There’s much more psychology involved in good physiotherapy than perhaps the public understands,’ he says. ‘You have to have a physiotherapist who you like and trust and who puts up with you. They become a kind of friend, part of your life.
‘If it wasn’t for Jo, the honest truth is I wouldn’t do my physiotherapy. I have a very short attention span and I get bored with repetitive exercises. But throughout, she’s talking to me, making me laugh and I try to make her laugh.’
And his message to Frontline readers? ‘We need more physiotherapists and more physiotherapy. And physiotherapists have to make the case to government that this is an investment that would pay back quite quickly.’ fl