An explanation of the Working Time Regulations as they affect physiotherapists.

The Working Time Regulations came into force in Great Britain on 1 October 1998 and in Northern Ireland shortly thereafter. The Regulations were introduced in order to comply with the Government’s obligation to implement European Working Time Directive through domestic (UK) legislation. The Regulations were amended for the first time in 1999 and then again on an almost yearly basis until 2009. This information paper outlines the provisions as at March 2013. It includes relevant case law and physiotherapy case studies.

Available to CSP subscribers only 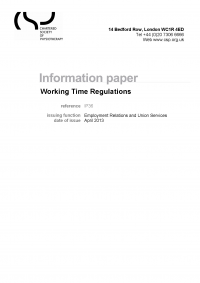