TUPE The Transfer of Undertakings (Protection of Employment) Regulations in England, Scotland and Wales

Available to CSP subscribers only 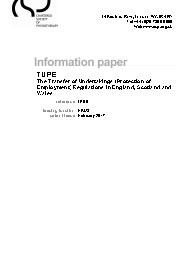