The annual Scottish National Party (SNP) conference in Aberdeen this week (13 October) provided an opportunity to promote the physiotherapy profession to a wide audience. The CSP joined the ‘healthcare hub’ in hosting a fringe discussion with public health minister, Joe Fitzpatrick MSP and a reception with Jeane Freeman MSP, cabinet secretary for health. 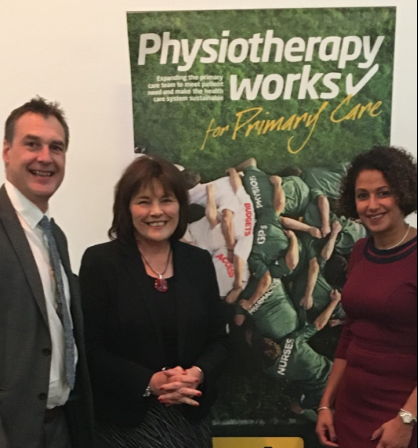 The expanding role of physiotherapists as first contact practitioners in GP settings was welcomed by the audience and panellists alike, and the discussion highlighted the potential of physiotherapy to transform health services by focussing on restoring and maintaining health through rehabilitation, early intervention, preventative and anticipatory care.

Speaking at the event, Kenryck Lloyd-Jones said, “It’s been a very valuable engagement, and really encouraging to hear the support in the audience for extending physiotherapy in primary care. Questions from service users, local councillors and national representatives stressed the need for better public information and future investment, which all chime with the CSP message.”

Mr Lloyd-Jones added, “we are also grateful to the cabinet secretary for personally picking up the issue of physiotherapy workforce planning and look forward to meetings with the Scottish government health directorate later this month”