Forth Valley physio leads use of red, dementia-friendly walking frames

A physio-led project has inspired a Scottish hospital to introduce brightly coloured, dementia-friendly walking frames to its wards, in place of the usual grey/silver models. 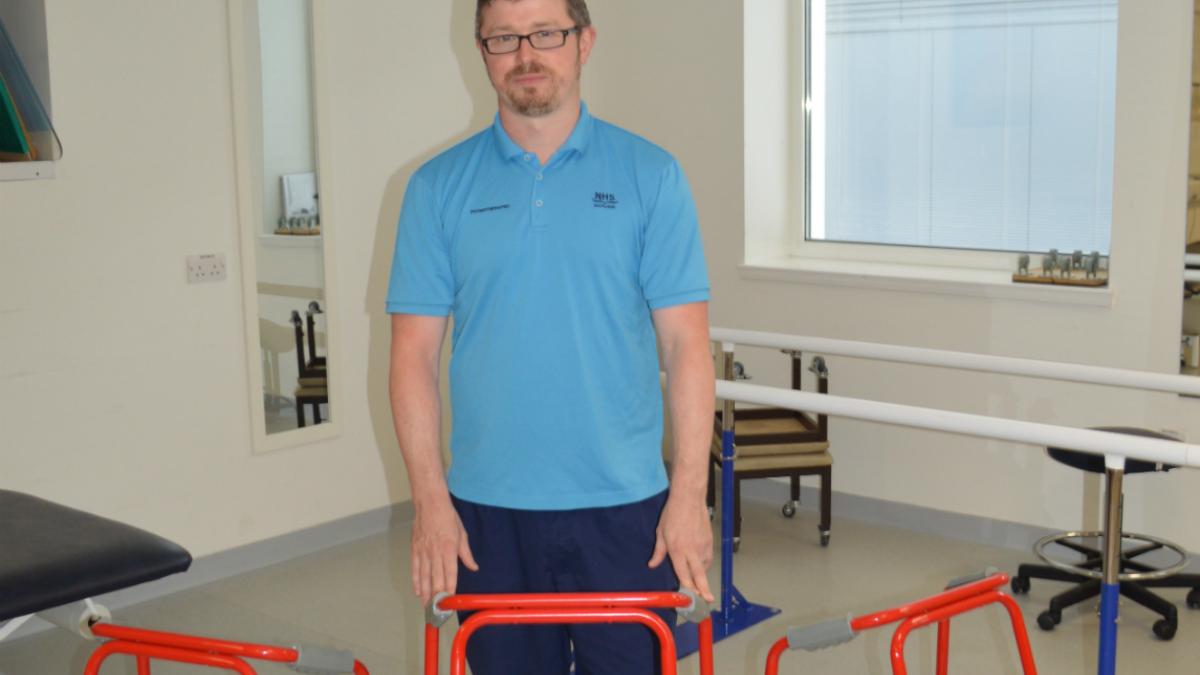 David MacKenzie, a specialist inpatient physiotherapist at Forth Valley Royal Hospital in Larbert, developed the idea after completing a dementia champion course.

He told Frontline: ‘Following the course, I was particularly taken by the importance of vision and colour for patients with dementia.

‘The hospital environment can be challenging for dementia patients due to lack of contrast between walls, floors and equipment.

‘I’d witnessed patients using their table to move around, and realised this was because it was the biggest block of colour in their rooms. Evidence has shown that using a coloured tumbler, with patients with cognitive or sensory impairments, increases fluid consumption by 84 per cent and I thought why not have coloured walking frames too?’

Mr MacKenzie conducted a short quality improvement project at the hospital to investigate the possible benefits. The small-scale pilot trial used funding, from local charity the Friends of Forth Valley Hospital, to purchase a small number of red walking frames.

Data collection took place once a week over a ten-week period, with five patients who were identified as suitable participants.

‘One patient went from using their frame only 20 per cent of the time, and never leaving their side room, to 100 per cent compliance with the red frame and they began walking up and down the ward corridors interacting with both staff and fellows patients,’ said Mr MacKenzie.

He added that people with dementia find the red frames easier to see and are more likely to be use them to help them walk and regain their independence.

Dawn Gleeson, NHS Forth Valley’s AHP co-ordinator at the hospital, said: ‘This is a simple but effective way of making it easier for patients with dementia to be more active. This is not only important for their overall health and wellbeing, but also supports great confidence and independence.’

The hospital has now received a further 80 red walking frames, which they are making available to patients with dementia.

Frontline previously reported on a similar trial, which took place at Frimley Park Hospital in Camberley, Surrey, in 2015.