You only die once: end-of-life care 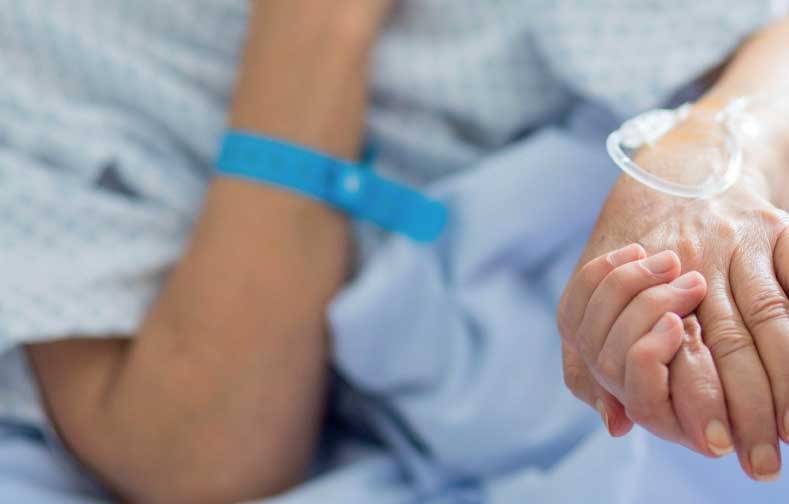 Physiotherapists can go on helping patients right up until the end of life. Even in the final stages of illness, physiotherapy has been proved to relieve pain and improve mobility. And on top of easing symptoms, physios can help a patient take decisions that ensure that they have the best possible death.
The government is currently considering changes to the NHS constitution that would give patients more control over their healthcare, including at the end of life.
And in a report on improving end of life care, published in March, the House of Commons health committee called for staff to be trained in both communication and ‘advance care planning’ – including the legal status of different options.
People will be encouraged to make decisions such as in what circumstances they would or would not wish to receive life-prolonging treatments, and where they would prefer to die. At present, most people say they want to die at home or in a hospice, but more than half end up dying in hospital.

For health professionals, this means encouraging patients to make well-informed decisions in good time and to leave written instructions.
‘A patient I’d known for some time, who had chronic obstructive pulmonary disease, was admitted to a local acute hospital’s high-dependency unit,’ says Emily Stowe, day therapy manager at St Clare Hospice in Hastingwood, Essex.
‘But he was hospital-phobic, he really needed not to be there. I visited him and I was very upset that he was in the wrong place. The hospital said he was too unwell to go home to die!
‘In the end, Macmillan nurses got him home, with support from our team. His wife rang me to say “I’m lying beside him. He’s been tickling the dog’s belly, which is just what he wanted to do.” He died within a couple of hours.
‘A good death – in the end – but the whole thing was very close to being extremely traumatic.’
Physios, with their communication skills and good relationships with patients, are well placed to help people talk things through.
‘It’s a difficult conversation to have,’ says Ms Stowe, a member of the Association of Chartered Physiotherapists in Oncology and Palliative Care (ACPOPC) committee. ‘No one likes thinking about their own death. But it makes a huge difference to the person and also to the family’s bereavement process.’
Patients who don’t wish to receive cardiopulmonary resuscitation (CPR) can ask their doctor for an official form making this clear. Usually known as a ‘do not attempt CPR’ (DNACPR) form, this has to be signed by a GP after discussion with the patient.
Details of the form and its use vary. It doesn’t rule out other interventions. And a form may be issued without a patient’s request, when CPR is expected to be unsuccessful or to do more harm than good.
‘If cardiac or respiratory arrest is an expected part of the dying process and CPR will not be successful, making and recording an advance decision not to attempt CPR will help to ensure that the patient dies in a dignified and peaceful manner,’ says the General Medical Council.
‘It may also help to ensure that the patient’s last hours or days are spent in their preferred place of care by, for example, avoiding emergency admission from a community setting to hospital.’

Most people think CPR has a much higher success rate than it actually has: less than 20 per cent of patients receiving it in hospital survive long enough to go home. Especially with an older or frail patient, the procedure can break bones, injure internal organs or cause brain damage. The sight can be horrific for relatives.
‘I had a patient who died quietly while watching one of his favourite television programmes,’ Ms Stowe recalls. ‘His carer came back into the room and found him dead. It could have been a perfect death but, as he didn’t have a DNACPR form, his carer had to dial 999 and paramedics tried for an hour to resuscitate him.
‘If someone doesn’t want CPR, it’s important to have the form,’ says Ms Stowe. ‘Otherwise people start trying to resuscitate them and it’s tragic for the family.’
Scotland and Wales have national policies on DNACPR forms, but there’s no single policy for the whole of England at present. So care providers have been producing their own, and physios would need to be familiar with their trust’s documentation.
‘It’s important for health and care professionals to feel more comfortable talking about these issues,’ says Joe Levenson of the National Council for Palliative Care (NCPC). ‘There’s definitely a role for physiotherapists in talking to people with life-limiting conditions, helping them make their wishes known and providing support.’
To hone these skills, training courses and materials are available from organisations such as Dying Matters. A coalition led by the NCPC, Dying Matters aims to make a good death the norm, under the slogan ‘You only die once’.
‘Sometimes a patient says something like “I’m a bit worried”,’ says Ms Stowe. ‘That could be an opening point for you to say “These are the sort of things you could look at … ”.’

It’s likely to be a relief for the patient to make a plan and know their wishes should be carried out. After that, a physio can continue helping by listening to the patient.
‘It’s about allowing the patient to prioritise,’ says Ms Stowe. Physiotherapy could help a patient achieve a final goal, such as one last outing. Otherwise, this may not be the time to concentrate on their physical potential.
‘Ask “What is the most important thing I can do for you?”,’ she says. ‘If their biggest concern is that they’re frightened of dying, they’re not going to be interested in doing exercises.’

What should you do if a patient dies while you are visiting them? Community physios should know if their trust has specific instructions, as these may vary from place to place.
In general, you need to carry contact details of patients’ GPs with you, and to know which patients have a valid DNACPR form stating that they do not want CPR.
If a patient dies while you are there or just before you arrived, and you can see the DNACPR form, you should call the GP to certify death.
If you don’t have the DNACPR form in front of you, dial 999 and carry out CPR until the ambulance arrives. (Being told by the family that the patient would not have wanted CPR is not enough, even if you know that’s true.)
Sometimes the situation may be less clear, for example if a patient with a DNACPR takes a turn for the worse.
‘If the patient deteriorates acutely and an ambulance is called, the operator should be informed of the DNACPR,’ says Carolyn McDonald, associate director of allied health professionals at NHS Fife.
After a death you could help the family by, for example, covering the patient’s body appropriately or closing their eyes. This could also help relatives overcome any qualms about touching the body.

The National Council for Palliative Care has published a guide titled 'What to expect when someone important to you is dying'.