Who cares? Older people and incontinence 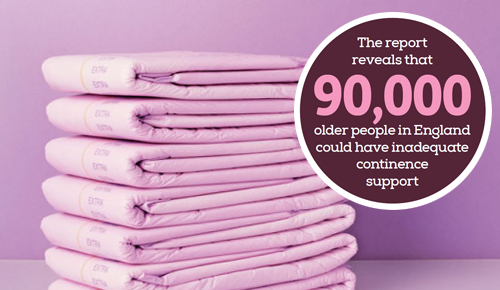 Treatment for incontinence has improved in recent years. Researchers have been discovering new methods and fine-tuning others that are already in use (see Physio findings, page 18).
‘Physiotherapists are uniquely placed to offer preventive and treatment options which can, for example, combine increasing general fitness and mobility as well as encouraging pelvic floor muscle exercises,’ says Doreen McClurg, chair of the Pelvic, Obstetric and Gynaecological Physiotherapy (POGP) professional network.
But those most likely to need help may have the least access to it. Older people in particular tend to be offered ‘containment products’ such as pads, instead of treatment, says Dr McClurg.
And a new report finds that thousands of older people in social care may be receiving inadequate support.
‘There are misconceptions that incontinence is an inevitable – or acceptable – part of ageing when in fact it can be easily assessed and treated,’ say the authors of Who cares? Uncovering the incontinence taboo in social care.
‘Across the country, almost half of all people with incontinence in social care are not receiving appropriately co-ordinated support across both a health and social care setting,’ says the report, by the expert group on lower urinary tract symptoms (LUTS).
‘This must be addressed as a matter of urgency, to stop people from falling through the gaps and developing avoidable complications which can ultimately result in hospitalisation.’
The report reveals that more than 90,000 older people, receiving social care funded by an English local authority, are at risk of having inadequate continence support.
That’s because their care – in a residential home, a day care centre or their own place – is funded by one of the many authorities that don’t put a written requirement in their contracts for providers to deliver effective continence care.
‘In the absence of a local authority contractual requirement, families and those being cared for have no guarantee that people will be supported with the most fundamental aspects of continence and toileting care,’ says the LUTS group.
Yet up to 80 per cent of people in care homes have some level of incontinence. It ranks second only to dementia as a reason for older people to enter a care home.
‘For carers, incontinence is sometimes the last straw and is often a major reason for the breakdown of the caring relationship which can lead to admission to residential or nursing home care,’ say the LUTS group.
‘Properly managed continence could support more people to stay independent and in their own homes.’

The LUTS report recommends a pathway in which care staff and managers are responsible for the first steps. They should identify the problem, refer to a GP or community continence service and provide support (such as containment products) while awaiting referral.
Health professionals should then, following National Institute for Health and Care Excellence (NICE) clinical guidelines:
Things are more likely to go wrong when people receive separate support packages for their health and care needs.
‘Joined-up and integrated commissioning for continence care has to date been limited,’ say the Who cares? authors. They call for health and social care commissioners to prioritise continence care and design services that work together seamlessly.
‘In many cases access to a specialist physiotherapist should be the first line of treatment for people with continence problems,’ says Ruth ten Hove, the CSP’s head of research and development.
‘Social care commissioners and providers should work with the NHS to make this a reality, by ensuring people in social care settings have timely access to an integrated continence service.’ fl

Urinary incontinence is more common among women, affecting many after childbirth and about one in three over the age of 80. For that reason, continence care is often seen as a women’s health issue.
However, the condition affects men too and they are often treated by women’s health physios.
In later age, both urinary and faecal incontinence become more common in both sexes – though men are even less likely than women to seek help.
Incontinence can lead to serious health problems including bed sores, infections, falls, fractures and unplanned hospital admissions. It can also cause depression and lead to social isolation.
‘Given that loneliness is becoming an increasingly concerning challenge amongst the older population, control over bladder and bowel could have a role to play in helping to address this problem,’ say the LUTS group.

Faecal incontinence is less common than bladder problems, affecting from one to 10 per cent of the population depending on how it’s defined. But it can be even more distressing.
Help should be available. ‘Physiotherapists specialising in continence care provide management encompassing all conservative measures, as recommended in the NICE guidelines, for both urinary and faecal incontinence,’ says Ms ten Hove.
But a series of national audits have found low rates of assessment and treatment of faecal incontinence in older people.
Researchers Danielle Harari and colleagues noted last year that the most recent audit ‘shows deficits in documented assessment, diagnosis and treatment for adults with faecal incontinence despite availability of clinical guidance’.
‘Overall care is significantly poorer for older people,’ said the team (Age & Ageing 2014).
Compounding the problem, researchers have found that many older people with this bowel problem don’t admit it even to themselves (Taylor DW et al. Public Health Research 2014).

The challenge to physios

‘Continence problems are under-reported, whether because of embarrassment, the belief that it is inevitable or unawareness that help is available,’ says advanced practitioner Annette Woodward, a member of both the LUTS group and the POGP continence sub-committee.
Health education is vital for prevention and promoting awareness, she says. And physios are well placed to identify problems in patients receiving treatment for another condition.
‘Often patients can manage their bladder and bowel problems at home, but struggle when out of their normal environment, for example if they’re admitted into hospital or care,’ says Ms Woodward. ‘The cause may be the patient’s underlying condition, medication or totally unrelated.’
In the community too, people may confide more readily in a physio than a doctor.
‘The problem is, how do these physios refer on?,’ asks Ms Woodward. ‘Are there robust funded pathways in place? Is the support in place? Unfortunately, not always.’
Funding cuts have led to senior posts being downbanded or have disappeared. while some continence services have been downgraded. Another issue is the shortage of specialist physios trained to deal with incontinence.
‘This subject is not part of the undergraduate curriculum,’ says Ms Woodward. ‘We rely on student placements to introduce the specialism. But these only touch the surface, and often it is a matter of luck if they are available.’
Opportunities for junior physios to undertake a specialist rotation are decreasing, she says, as many workplaces have no women’s health team or close links with community continence services.
Even the most successful may face difficulties. Kent Continence Service has expanded from one physio with an interest in women’s health in 2002, to a county-wide service receiving thousands of referrals a year. Along the way, the service has won its trust’s team innovation star award and has now been nominated for clinical team of the year.
‘As with any specialist service we have our challenges, and currently it is recruitment,’ says advanced urogynae practitioner Donna Osborn, of Kent Continence Service. ‘Waiting list times are much higher than we are used to.’
NICE quality standard on women’s urinary incontinence. NICE committee member Stephanie Knight warned that physios need to sell their services to providers, or risk being displaced by those with less expertise in muscle rehabilitation.
Social media groups are playing an increasing role. Researchers found considerably more useful information about incontinence on Twitter, Facebook and Youtube in 2013 than they had in 2010 (Alas et al. Female Pelvic Medicine & Reconstructive Surgery 2013).
Association for Chartered Physiotherapists in Respiratory Care.
Association of Chartered Physiotherapists in Oncology and Palliative Care.