Jennifer Trueland reports from the World Haemophilia Congress in Glasgow last month, where physiotherapy was prominent. 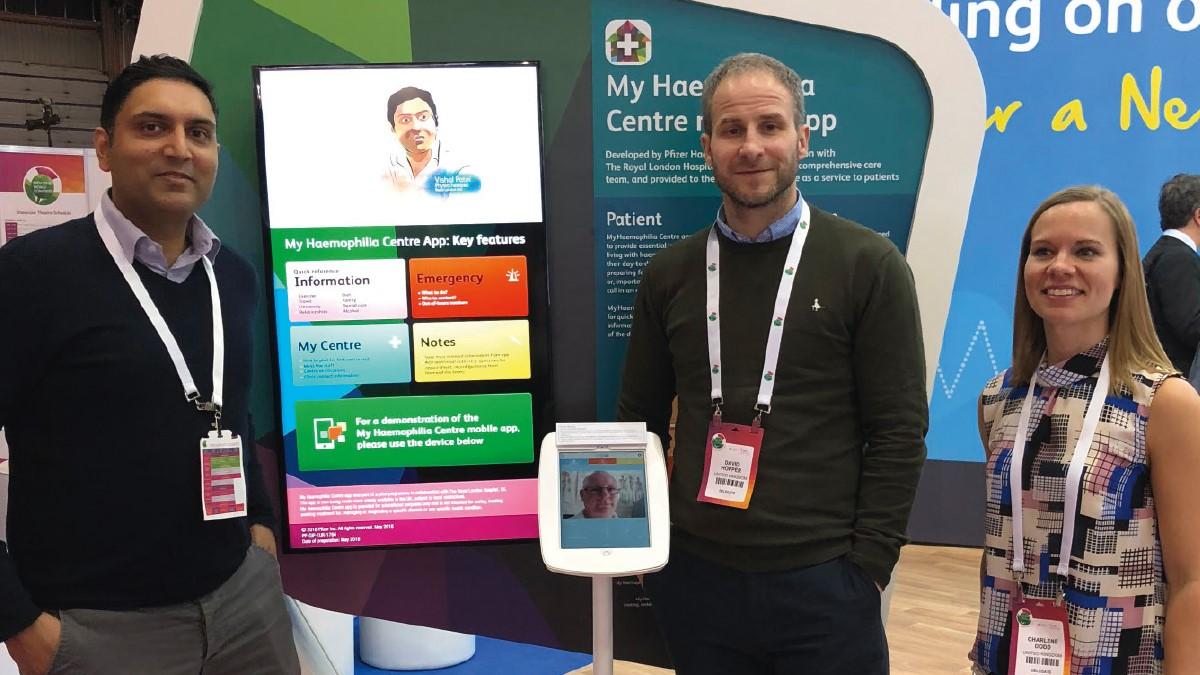 For recently qualified physiotherapist Rob Barnard, attending the World Federation of Haemophilia (WFH) Congress in Glasgow had a particular resonance.
From a professional perspective he was hugely interested in the many presentations showcasing the work of physios in the UK and elsewhere. But as someone living with haemophilia there was a personal element as well.
‘It was fantastic,’ he says simply. ‘The opportunity to hear presentations from the best in the field, sharing research and working collaboratively was really inspiring for me, both as a patient and in my own practice as a physiotherapist. It made me even more determined to be the best that I can be.’
Mr Barnard, who works at King’s College Hospital NHS Trust in London, and who is a youth ambassador for the UK’s Haemophilia Society, was just one of a band of UK physiotherapists making a big impact at the meeting. Most of these were members of the Haemophilia Chartered Physiotherapists Association (HCPA), an organisation initially founded in 1990 and now made up of the 60 or so UK physiotherapists who specialise in haemophilia and other inherited blood disorders.
It’s a growing group, partly because of increasing recognition of the value of physiotherapy in treating and supporting people with haemophilia, and partly due to the efforts of leaders in the field to encourage a focus on research, education and collaboration.

Current chair Anna Wells, a clinical specialist physiotherapist in haemophilia at Hampshire Hospitals NHS Trust, is tremendously proud of the breadth and quality of the group’s contribution to the WFH Congress. ‘The significant representation of the HCPA with both oral and poster presentations at this conference has been fantastic, and really shows the quality of innovation and research being done by our members,’ she says.

Speakers at the international event included Melanie Bladen, clinical specialist physiotherapist at London’s Great Ormond Street Hospital, who shared some of her thoughts and research on assessment of children with haemophilia. These included the value of using methods that were more meaningful for parents and for children – such as using diagnostic ultrasound to show teenagers what was actually happening in their joints.
Other UK speakers included Hannah Harbidge, a physiotherapist at the Bristol Royal Hospital for Children, who shared research that showed the value of having dedicated physiotherapists in haemophilia care, and the importance of regular training in assessment methods such as the Haemophilia Joint Health Score (HJHS).
Stephen Classey from Guy’s and St Thomas’ NHS Foundation Trust in London gave some initial results of the Real World Haemophilia Early Detection Ultrasound (HEAD US) Study and Vishal Patel spoke about the value of a specialist physio-led MSK clinic.

UK physiotherapists also worked with people with haemophilia at a treatment room set up at the congress – recognising that travel and the strain of attending such an event in a large venue can have a detrimental effect on their condition.
Physiotherapists are key members of the multi-disciplinary team supporting people with haemophilia, says Ms Wells. ‘For a lot of people, it is their MSK problems that they have due to previous or ongoing bleeding that is the biggest issue for them. There are fantastic treatments for haemophilia now which means that it can be controlled very well, but someone can still have ankle pain that bothers them every day. It’s the effects of haemophilia that are very limiting for people, but physiotherapy can help. It’s becoming recognised more and more that we have a big role for this patient group.’
So will Mr Barnard choose a career as a specialist haematology physiotherapist? As yet, he is unsure. ‘I’ve had some great care and have met some amazing physio role models,’ he says. ‘But one thing I have learned is that to be a specialist, you have to be really good at what you do. So I’m concentrating on that for now.’

Patients have overwhelmingly welcomed a physiotherapy-led musculoskeletal clinic for people with haemophilia, with almost all saying they found it useful or very useful.
Vishal Patel, clinical specialist physio at the Royal London Hospital-based Haemophilia Centre, said that most patients (66 per cent) attending the clinic had given them a better understanding of how the condition has affected their joints.
Speaking to congress, Mr Patel said the clinic had been set up to give patients a dedicated hour-long appointment with a physio. Previously, although patients did have the opportunity to see a physio in the medically-led multi-disciplinary haemophilia clinic, these consultations varied in length and could be as little as 15 minutes.
The physio-led clinic is focused on MSK health and function and involves screening using a number of tools as well as prevention of chronic arthropathy.
An audit of the service in its first year found that 95 per cent felt it would be useful or very useful to attend an extra appointment each year for a full MSK check-up and that 87.5 per cent would recommend it to other people with haemophilia. More than four in 10 (41 per cent) said they were more aware of the impact that non-adherence to treatment had on their joints as a result of attending the clinic, while a third said they had changed the way they managed their haemophilia as a result.

Clive Smith, 37, a barrister, is a keen triathlete, who competes in events such as Ironman (2.4 miles swim, 112 miles bike and a marathon-length run) across the world. He also has severe haemophilia A, and is a trustee of the Haemophilia Society. ‘Without physiotherapy, I wouldn’t be able to do what I do,’ he says. ‘My specialist physiotherapist [Paul McLaughlin] has always been great. It’s important to have a physio who has that level of understanding – it makes the world of difference; I don’t have to explain it all every time I see him.’
Mr Smith was one of the speakers at the WFH Congress, sharing his experience of participating in sporting events at a high level. Based in Yorkshire, but still under the care of the haemophilia team at London’s Royal Free Hospital, Mr Smith began taking part in endurance sporting events seven years ago. Although he admits that it can be ‘a bit more challenging’ for someone with haemophilia, he remains determined to push his limits. Physio has been crucial, he says, particularly strengthening and injury prevention work. ‘I have the same problems as any other sportsman, but then there are also the problems of haemophilia,’ he says. These include compensating for an imbalance in his left ankle which means that the muscles are different sizes in his lower limbs. Clearly, however, it does not hold him back. When pressed, he admits he completed his latest challenge, the Frankfurt Ironman, in an impressive 10 hours and 18 minutes.
He is now looking forward to his next event in July.